This article was reviewed by Brian Perkins, PhD

Inherited retinal dystrophies (IRDs) are characterized by degeneration of rods and cones; generally, the rods initially degenerate in the peripheral retina, progressing to the central retina, which leads to minimal vision in the fovea and, ultimately, blindness.

The speed of progression varies with the disease. IRDs are not uncommon, and an estimated 1 in 4000 individuals worldwide may be affected, with more gene mutations being identified. Treatments are limited.

Personalizing medicine for patients with IRDs can be challenging.

To address this, the National Eye Institute established the Audacious Goals Initiative, which is working toward regeneration of neurons and neural connections in the eye and vision system with the targets being photoreceptors and ganglion cells.

“This goal in humans emerged from the recognition that some species already have the ability to repair damaged photoreceptors,” Perkins said.

Goldfish and zebrafish are noteworthy examples. Fish have similar anatomy and physiology to humans in addition to the ability to regenerate retinal, brain, spinal cord, cardiac, and pancreatic tissues and appendages.

Perkins demonstrated that when a zebrafish’s photoreceptors are damaged, they release molecules that trigger Müller glial cells in the retina to transform into stem cells that divide, mature, and regenerate, restoring the lost rods and cones.

Much of this knowledge came from examining acute damage to the retina, such as from light damage or mechanical injury, and not from genetic disorders, he explained.

Perkins and his colleagues are investigating zebra-fish that have genetic mutations in genes that are known to cause retinal degenerations in humans.

The CEP290 gene has been linked to Leber congenital amaurosis and retinitis pigmentosa. Zebrafish with this mutated gene have scoliosis, fertility issues, photoreceptor degeneration, and other pathologies.

Importantly, the few remaining cones in the affected fish are more disorganized and do not regenerate, which raises the question of whether mutant zebra-fish have lost the ability to regenerate.

In siblings of the affected zebrafish and the mutant zebrafish themselves, the investigators damaged the retinas with high-intensity light.

The photoreceptors were seen to degenerate, and after approximately 2 weeks they began to regenerate.

With cone degeneration, the investigators questioned if the disease environment would limit full regeneration.

Investigation led to the finding that zebrafish with progressive degeneration do not fully regenerate the photoreceptors after damage, Perkins explained.

“This is critical, because it indicates that the disease environment somehow limits the overall capacity for regeneration,” he said.

Many questions remain, including why the retina responds differently to acute damage than to disease, whether full restoration of the cone density is limited by the diseased retina, whether immune cells promote or inhibit regeneration, and whether regeneration can be stimulated without causing additional damage.

Brian Perkins, PhD
e:perkinb2@ccf.org
Perkins has no financial interest in this subject matter. 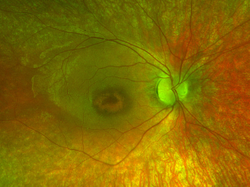