Although there currently are no options available to treat retinitis pigmentosa (RP), a novel approach has been evaluated in a phase 2 clinical trial that determined the clinical effect of the injection of human retinal progenitor cells to improve vision and visual fields in this patient population by activating and preserving retinal cells to treat RP.

The trial’s findings indicated that this treatment may be able to enhance vision and visual fields in specific patients with RP whose living cells can be rejuvenated, according to David S. Boyer, MD, an adjunct clinical professor of ophthalmology at the Keck School of Medicine of USC in Los Angeles, California.

A heterogeneous group of patients with RP and 20/80 to 20/800 vision were included in the phase 2 trial. The patients were not excluded based on their clinical picture or genetics.

These were regenerative cells intended to enhance cells that might still be living in the retinas of patients with RP.

The primary end point was the mean change in the best-corrected visual acuity (BCVA) from baseline to month 12.

The study’s goals were to determine the ideal dose and identify secondary end points and the clinical characteristics of the patients who might benefit most from 1 intravitreal dose in a phase 3 trial.

Following exclusion as the result of administration of the wrong dose, loss to follow-up, or a preexisting condition, 74 patients were included in study and randomized 1:1:1 in the analysis.

Related: The first steps in gene therapy for achromatopsia

The secondary end points were low light mobility to facilitate navigation through a maze, kinetic visual fields that map the remaining vision, contrast sensitivity, and the results of a visual functioning questionnaire (VFQ-48).

Results
Injection of the 6-million-cell dose showed a moderate improvement in vision of approximately 4.4 letters over the sham treatment.

The kinetic visual field also showed an improvement, contrast sensitivity, and results of the VFQ-48; however, no improvements were seen in the low luminance test, Boyer reported.

In previous studies, Boyer explained, patients with a visual field of less than 12 degrees had been identified as unable to be reliably measured because of their inability to maintain fixation without central vision.

Moreover, patients with a 3-line difference in vision between the treated eye and the fellow also had a decrease in vision that could not be improved.

At the time of this report, approximately 130 eyes had been treated and the safety profile was excellent. No serious adverse events occurred in the group treated with the higher dose.

“The study found that the 6-million-cell dose was the most effective, all clinical trial end points were useful and supportive of the treatment effect, the treatment had an excellent safety profile, and certain patients from the broad set of [patients with RP] studied can be assessed more reliably,” Boyer said.

However, the question remains as to which patients would benefit the most from this treatment.

Heat maps were generated that showed the width and the band of the ellipsoidal zone, and the results indicated that the thickness of the ellipsoidal zone may be predictive of improvements in the end points (BCVA, visual fields, contrast sensitivity, the low luminance level in the maze, and the VFQ-48 results) with treatment with human progenitor cells compared with sham treatment.

Similarly, the mean foveal central thickness also was highly correlated with improvements in the end points in the 6-million-cell group.

“The optical coherence tomography findings indicated structural predictors, ie, the ellipsoidal zone thickness and the mean foveal thickness, for [participants] who received the 6-million-cell dose who were most likely to improve with injection of human progenitor cells,” Boyer concluded. “There was no evidence of structural improvement at 12 months. The potential minimal thickness should be considered as part of the inclusion criteria for future studies. “

The phase 3 trial will begin in the third quarter of 2022.

David S. Boyer, MD
e:vitdoc@aol.com
This article was adapted from Boyer’s presentation at the Bascom Palmer Eye Institute’s Angiogenesis, Exudation, and Degeneration conference, held virtually in February. Boyer is a consultant to jCyte, which ran the study under discussion and participated in the study. 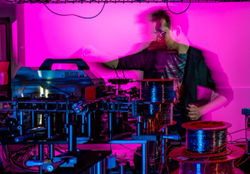