Investigators found evidence of improvement in vision and retinal structure in patients with DME and AMD sustained through 12 weeks.

According to the company, the data show strong and sustained responses following a single injection of UBX1325 out to 12 weeks and add substantively to the previously reported 8-week dataset, which provided initial evidence of efficacy. The 24-week data from the study is expected before the end of the year.

The company noted that UBX1325, a small molecule inhibitor of Bcl-xL and the first senolytic drug candidate for ophthalmologic diseases targeting a distinctive biologic pathway from anti-VEGF therapies, continues to be well-tolerated with no treatment-related adverse events or dose-limiting toxicities up to 12 weeks.

“It is promising to see improvements in vision sustained over three months after a single dose in these patients with advanced vascular eye disease, especially considering that these patients had gone at least six months without standard of care anti-VEGF therapy by this point,” Robert Bhisitkul, MD, PhD, professor of ophthalmology and director of the Retina Fellowship at University of California, San Francisco, said in a statement. “There are limited treatment options for patients who do not benefit from standard of care, so a novel therapeutic approach like UBX1325 could provide significant benefit as an alternative or complement to anti-VEGF treatments.”

Treatment of patients with a single UBX1325 injection resulted in the following clinical changes at 12 weeks following treatment:

The Phase 1, open-label, single-ascending dose study includes 12 patients with advanced DME or wet AMD who were no longer expected to benefit from anti-VEGF therapies.

According to Unity, patients enrolled in the study could not have received an anti-VEGF therapy or corticosteroid for three months prior to receiving a single dose of UBX1325. At 12 weeks following treatment with study drug, UBX1325 demonstrated a favorable safety profile supporting further clinical development.

Moreover, the company noted that there were no dose-limiting toxicities observed, with two nonserious, nondrug-related adverse events reported through 12 weeks.

“We are excited by the trajectory of the data showing both a rapid response and sustained improvements in vision and retinal structure in most patients through 12 weeks following a single injection of UBX1325,” Anirvan Ghosh, PhD, chief executive officer of Unity, said in a statement.

Ghosh said the consistency of response at 8 and 12 weeks suggests that the functional gains seen to date may be sustained beyond 12 weeks.

“These data further support our Phase 2a Proof of Concept study in patients with DME, which is already underway, and we anticipate the 12-week safety and efficacy data from that study in the first half 2022,” Ghosh said.

Unity expects to share 8-week data from an additional cohort of patients with wet AMD, as well as complete 24-week data of the original cohort from the Phase 1 single ascending dose study, before the end of the year. 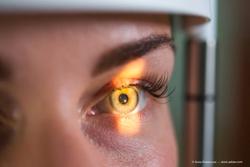