The future is now for robot-assisted glaucoma surgery

Utilizing new technology, surgeons can be 20 to 40 times more precise. 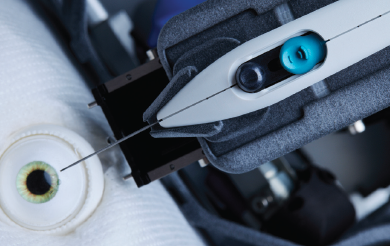 The first robotic gonio surgery system was developed in the heat of the pandemic in 2020 by the ophthalmology innovation team at New York Eye and Ear Infirmary of Mount Sinai in New York, New York.

This novel surgical system could dramatically improve outcomes for patients with glaucoma with its remarkable level of precision that is unachievable during standard glaucoma surgery.

The glaucoma module of the system is the first surgical application outside retina for the Preceyes robotic system, which was first CE marked in 2019 in Europe and is heading toward FDA studies in the United States.

Sean Ianchulev, MD, MPH, a professor of ophthalmology at the Icahn School of Medicine and director of ophthalmic innovation and technology at New York Eye and Ear Infirmary of Mount Sinai, pointed out that the robotic system allows surgeons to achieve precision during glaucoma surgery that is 1 to 2 μm, compared with what can be accomplished during a manual surgery.

“This is [approximately] a 20 to 40 times increase over existing levels of surgical precision,” Ianchulev said.

Previously, this system was used in Europe for retinal surgeries such as membrane peeling. It is now being developed for anterior segment application with the minimally invasive glaucoma surgery (MIGS) robot-assisted goniotomy and for stent implantation.

One of the greatest limitations of manual surgeries is surgeon tremor, which can average, during manual vitreoretinal surgery, a 182 root-mean-square tremor amplitude, with approximately a 100-μm peak-to-peak vector of magnitude.

To emphasize this impact on a glaucoma surgery, Ianchulev explained that in Schlemm's canal the structures can be as small as 100 μm to 150 μm.

“When considering MIGS, we are at a new inflection point of precision where devices such as microstents and anatomic structures (eg, trabecular meshwork) are exceedingly small and require a much higher fidelity of surgical intervention,” Ianchulev said. “With the help of robotics, we can improve precision from approximately 120 μm to 150 μm down to approximately 5 μm.”

In a significant number of cases, micro-stents are often implanted outside the targeted and clinically relevant anatomy, which nullifies their IOP-lowering effect. Ianchulev related the case of one of his patients with glaucoma who had been considered to have well-controlled IOP following stent implantation. A follow-up evaluation showed that the stent had been positioned well below the trabecular meshwork.

“It was successfully deployed but anatomically and clinically inconsequential and not in the desired location,” Ianchulev said.

In fact, approximately 30% of MAUDE safety reports in the FDA iStent (Glaukos) database are related to malpositioning, likely aﬀecting both the safety and eﬃcacy of the procedure.

The investigators started by adapting the robotic retina technology for use in glaucoma surgeries to attempt goniotomy and stent implantation. The ﬁrst step was building an adaptation from 3D printing for the coupling between the iStent injected device and the robot to ensure successful surgeries.

Ianchulev described the challenges of developing this technology. One such challenge was adapting the angle of approach that was needed for visualization for robotic entry into the anterior chamber. Another was developing the real parameters necessary to operate the high-precision device in the angle using a joystick.

Ianchulev and Gautam Kamthan, MD, in collaboration with the Preceyes robotics team in the Netherlands, were able to demonstrate in a synthetic eye that robotic-assisted goniotomy can be successfully performed in a very controlled way.

“This really attested to the lack of tremor and high precision when operating this device. There was almost zero tremor,” Ianchulev said.

In like fashion, the team demonstrated precise robotic deployment of the iStent microstents with superior tremor-free manipulation and accurate precise implantation into the trabecular meshwork of the synthetic model.

“This is so important because this level of surgical precision has been unattainable before and it is unknown what the outcomes will be a result. This will transform surgical instrumentation to facilitate our new surgical ability,” Ianchulev concluded.

The article is adapted from Ianchulev’s presentation at the American Academy of Ophthalmology 2021 annual meeting. He is a scientific adviser to Preceyes Inc. Mount Sinai has invested in this technology.