Stephen D. McLeod, MD, selected as next CEO of American Academy of Ophthalmology

The American Academy of Ophthalmology board of trustees recently announced the selection of Stephen D. McLeod, MD, as the Academy’s next chief executive officer.

McLeod, 57, currently is the Theresa M. and Wayne M. Caygill, MD, Distinguished Professor and chairman of the Department of Ophthalmology at the University of California San Francisco (UCSF). He will succeed David W. Parke II, MD, who in April announced his plans to step down, effective Feb. 1.

“David has been an incredible leader and the Academy is thriving,” McLeod said in a statement. “I am thrilled to have the opportunity to serve the Academy and such an inspirational group of colleagues that is our profession.”

At UCSF, McLeod leads a research, education and patient care program with an annual budget approaching $40 million and 250 employees, including 59 clinicians and scientists.

Under his direction, the department more than doubled clinical care visits and tripled research funding and successfully completed a $200 million capital and research base expansion program.

The research program was the leading recipient of National Eye Institute (NEI) funds for the last three years running.

McLeod also has a long history of Academy service, beginning as a member of the Preferred Practice Patterns Committee, a panel of experts that produce guidelines that serve as the gold standard for quality eye care. He has been a member of the Board of Trustees since 2017.

According to Tamara R. Fountain, MD, president of the Academy, McLeod “brings critical experience and vision to the role of Academy CEO and is our enthusiastic choice to lead organized ophthalmology in 2022 and beyond.”

McLeod maintains an active clinical practice in cornea and external disease, including cataract and refractive surgery.

His research centers on design and execution of randomized clinical trials to improve diagnosis and treatment of corneal infection worldwide.

He is a former chair of the Ophthalmic Devices panel of the FDA and is a former member of the National Eye Advisory Council advising the Secretary of Health and Human Services, National Institutes of Health and the NEI on all policies and activities relating to vision research, training and other programs of the institute.

Before his tenure at UCSF, McLeod was a resident, assistant professor and then director of refractive surgery at the Illinois Eye and Ear Infirmary at the University of Illinois at Chicago.

The CEO is the highest staff position for the Academy, leading more than 200 employees and managing an annual budget of $62 million.

The CEO must be an active or life fellow of the Academy; have an active, unrestricted license to practice medicine; and have experience in leadership and organizational management.

In April, Parke announced his intention to step down after 12 years in the role. A committee led by Academy past-president Anne L. Coleman, MD, PhD, conducted a national search for Parke’s successor.

Parke said he was pleased with the selection of McLeod as the Academy’s next CEO.

“He is widely recognized as a leader in academic ophthalmology and as a gifted teacher, and I have also been delighted to partner with him on issues of advocacy at the state and federal level,” he said in a statement. “His business management expertise has been highlighted as he directed the development and operation of a beautiful new eye institute. All ophthalmologists will be fortunate to have Dr. McLeod at the Academy’s helm.” 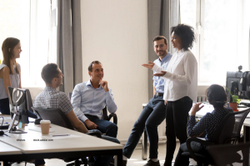