Use of a drug to correct the eyelid position could eliminate the complications associated with surgery.

Once-daily instillation of oxymetazoline hydrochloride ophthalmic solution 0.1% resulted in rapid, sustained elevation of the upper eyelids in patients with acquired blepharoptosis, according to Jason Bacharach, MD, director of research, North Bay Eye Associates, Petaluma, California, who reported the results of a phase 3 trial1 of the drug.

Blepharoptosis occurs frequently, with incidence rates ranging from 4.7% to 13.5% of adults that increase with age.

The major effect of this disorder, regardless of how minor the degree of ptosis, is the interference with the superior visual field and consequent declines in the health-related quality of life as patients find themselves limiting their daily activities, he explained.

Patients with blepharoptosis previously had to undergo surgery to achieve the appropriate position of the upper eyelid. Use of a drug to correct the eyelid position could eliminate the complications associated with surgery.

Phase 3 study
In this study, the data were pooled from 2 prospective, randomized, placebo-controlled safety and efficacy phase 3 trials of oxymetazoline.2

The investigators furthered their evaluation of oxymetazoline by evaluating the time at which the drug affected the eyelid elevation beginning at 5 minutes after instillation and the durability of that change in elevation.

The investigators measured the changes in the marginal reflex distance-1 (MRD-1) at additional time points over multiple days with the focus on the onset of action on days 1, 14, and 42.

The MRD-1 was defined as the distance between the center of the pupillary light reflex and the upper eyelid margin with the eye in primary gaze.

A total of 203 patients were randomly assigned to active treatment and 101 to placebo.

Results
The onset of action of oxymetazoline 0.1% was fast, beginning 5 minutes after instillation.

The differences at both times reached significance (p<0.001).

The difference both reached significance (p<0.05).

At 2 to 6 hours after instillation on days 1 and 14, significant (p<0.001) improvements also were seen compared with placebo.

“At all time points, the proportion of subjects with a positive treatment response to treatment (>0% MRD- 1 increase) exceeded 15% greater in the oxymetazoline 0.1% group (range ,16.6–36.1% more responders vs. vehicle), with the largest differences observed 2 and 6 hours post-instillation,” they commented.

Based on these results, investigators concluded that oxymetazoline 0.1% provided rapid and sustained upper eyelid elevation.

“Together with data that showed superior visual field improvement and a favorable safety profile, this analysis supports oxymetazoline 0.1% as an effective non-surgical treatment for acquired ptosis,” they said. 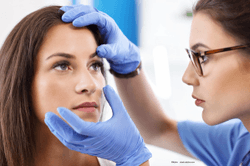