NIH researchers zero in on a new cause of Stargardt disease

According to National Institutes of Health/National Eye Institute researchers, the study may help lead to gene therapy for rare inherited blinding disease. 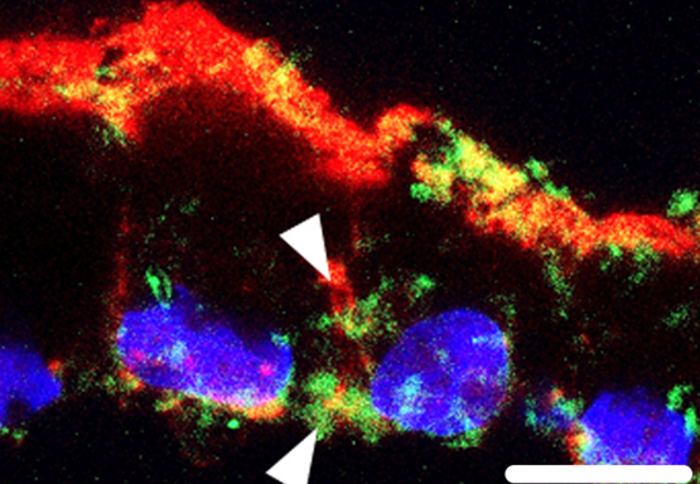 A cross section of the stem-cell generated RPE is shown after it has been fed photoreceptor outer segments. Arrows point to lipid deposits (green). This buildup of lipids is toxic to the cell, and similar to that seen in patients with Stargardt disease. (Image courtesy of Kapil Bharti, PhD)

Using a new stem-cell based model made from skin cells, scientists found the first direct evidence that Stargardt-related ABCA4gene mutations affect a layer of cells in the eye called the retinal pigment epithelium (RPE).

According to a National Institutes of Health/National Eye Institute news release, the discovery points to a new understanding of Stargardt disease progression and suggests a therapeutic strategy for the disease, which currently lacks treatment.

The study took place at the National Eye Institute (NEI), part of the National Institutes of Health. The findings published online in Stem Cell Reports.1

“This new model will accelerate development of therapies for Stargardt disease,” NEI Director Michael F. Chiang, MD, said in the news release. “We lack a therapy for this disease in part because it’s rare. This model theoretically creates an unlimited supply of human cells for study.” Stargardt affects about 1 in every 10,000 people in the U.S.

According to the NHI/NEI news release, Stargardt disease causes progressive loss of central and night vision. The vision loss is associated with the toxic build-up of lipid-rich deposits in the RPE, whose main job is to support and nourish the retina’s light sensing photoreceptors. Under normal conditions, the ABCA4 gene makes a protein that prevents this toxic build-up. Prior research showed that Stargardt disease is caused by a variety of mutations in the ABCA4 gene. More than 800 ABCA4 mutations are known to be associated with a broad spectrum of Stargardt disease phenotypes.

NIH researchers noted that one way the RPE supports photoreceptors is by ingesting their spent outer segments, which keeps the cell pruned and healthy. In Stargardt disease, many scientists believe that RPE cells die after they acquire toxic byproducts when they ingest outer segments, and that this in turn leads to photoreceptor death and vision loss.

Much of the current understanding of Stargardt disease was gained by studying mouse models, which are inherently limited owing to the wide genetic variability of the disease in humans. With a human model of RPE, the NEI investigators were able to determine if ABCA4gene mutations directly affected the RPE independent of photoreceptors.

According to the news release, further tests of the ABCA4 knockouts showed evidence of defective RPE lipid metabolism and an impaired ability to digest photoreceptor outer segments, leading to lipid deposits in RPE cells.

The researchers noted that this is the first report where loss of ABCA4 function in human RPE has been associated with intracellular lipid deposits in those cells, without exposure to ABCA4 mutant photoreceptor outer segments. Over time, these lipid deposits may contribute to RPE atrophy, leading to photoreceptor degeneration.

This research is part of a larger effort by the NEI to address the limited availability of patient-derived stem cell lines for studying Stargardt disease. To overcome this barrier, the NEI initiated a STGD1-iPSC banking program from patients with different ABAC4 mutations. These cells will be made available to the community at-large for mechanistic and genotype-phenotype studies.

The work was funded by the NEI Intramural Research Program.