The technique provides model for studying genesis of age-related macular degeneration and other eye diseases. 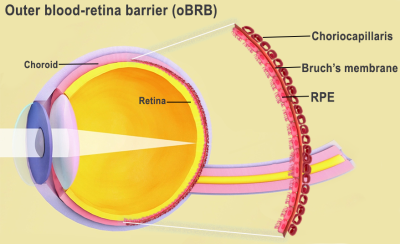 The outer blood-retina barrier is the interface of the retina and the choroid, including Bruch's membrane and the choriocapillaris. (Images courtesy of the National Eye Institute)

Scientists used patient stem cells and 3D bioprinting to produce eye tissue that will advance understanding of the mechanisms of blinding diseases.

According to a news release, the research team from the National Eye Institute (NEI), part of the National Institutes of Health, printed a combination of cells that form the outer blood-retina barrier—eye tissue that supports the retina's light-sensing photoreceptors.1 The technique provides a theoretically unlimited supply of patient-derived tissue to study degenerative retinal diseases such as age-related macular degeneration (AMD). 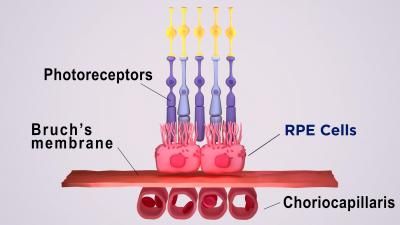 Scientists used patient stem cells and 3D bioprinting to produce eye tissue that will advance understanding of the mechanisms of blinding diseases.

Kapil Bharti, PhD, who heads the NEI Section on Ocular and Stem Cell Translational Research, noted in the news release that researches know that AMD starts in the outer blood-retina barrier.

“However, mechanisms of AMD initiation and progression to advanced dry and wet stages remain poorly understood due to the lack of physiologically relevant human models,” Bharti said in the release.

Growth of blood vessels across printed rows of an endothelial-pericyte-fibroblast cell mixture. By day 7, blood vessels fill in the space between the rows, forming a network of capillaries.(Image courtesy of Kapil Bharti, PhD)

The outer blood-retina barrier consists of the retinal pigment epithelium (RPE), separated by Bruch’s membrane from the blood-vessel rich choriocapillaris. Bruch's membrane regulates the exchange of nutrients and waste between the choriocapillaris and the RPE. In AMD, lipoprotein deposits called drusen form outside Bruch's membrane, impeding its function. Over time, the RPE break down leading to photoreceptor degeneration and vision loss.

Bharti and colleagues combined three immature choroidal cell types in a hydrogel: pericytes and endothelial cells, which are key components of capillaries; and fibroblasts, which give tissues structure. The scientists then printed the gel on a biodegradable scaffold. Within days, the cells began to mature into a dense capillary network.

According to the NIH release, on day nine, the scientists seeded retinal pigment epithelial cells on the flip side of the scaffold. The printed tissue reached full maturity on day 42. Tissue analyses and genetic and functional testing showed that the printed tissue looked and behaved similarly to native outer blood-retina barrier.

Under induced stress, printed tissue exhibited patterns of early AMD such as drusen deposits underneath the RPE and progression to late dry stage AMD, where tissue degradation was observed. Low oxygen induced wet AMD-like appearance, with hyperproliferation of choroidal vessels that migrated into the sub-RPE zone. Anti-VEGF drugs, used to treat AMD suppressed this vessel overgrowth and migration and restored tissue morphology.

“By printing cells, we’re facilitating the exchange of cellular cues that are necessary for normal outer blood-retina barrier anatomy," Bharti explained in the news release. "For example, presence of RPE cells induces gene expression changes in fibroblasts that contribute to the formation of Bruch's membrane – something that was suggested many years ago but wasn’t proven until our model."

Among the technical challenges that Bharti's team addressed were generating a suitable biodegradable scaffold and achieving a consistent printing pattern through the development of a temperature-sensitive hydrogel that achieved distinct rows when cold but that dissolved when the gel warmed. Good row consistency enabled a more precise system of quantifying tissue structures. They also optimized the cell mixture ratio of pericytes, endothelial cells, and fibroblasts.

Co-author Marc Ferrer, PhD, director of the 3D Tissue Bioprinting Laboratory at NIH’s National Center for Advancing Translational Sciences, and his team provided expertise for the biofabrication of the outer blood-retina barrier tissues “in-a-well,” along with analytical measurements to enable drug screening.

“Our collaborative efforts have resulted in very relevant retina tissue models of degenerative eye diseases,” Ferrer said in a statement. “Such tissue models have many potential uses in translational applications, including therapeutics development.”

Bharti and collaborators are using printed blood-retina barrier models to study AMD, and they are experimenting with adding additional cell types to the printing process, such as immune cells, to better recapitulate native tissue.