With the advent of intravitreal agents that block the negative effects of vascular endothelial growth factor among patients with age-related macular degeneration, ophthalmologists have begun to seek a higher level of performance from their diagnostic equipment.

With the advent of intravitreal agents that block the negative effects of vascular endothelial growth factor (VEGF) among patients with age-related macular degeneration (AMD), ophthalmologists have begun to seek a higher level of performance from their diagnostic equipment. Tracking patient response to these new treatments and assessing the need for re-treatment require highly precise measurements, not just of the qualitative nature of macular and retinal thickness, but their quantitative nature as well. More than ever, small changes must be charted accurately over a long period.

Optical coherence tomography (OCT) has played a crucial role in these efforts so far. This non-invasive imaging technique affords a high-resolution assessment of retinal thickness largely unmatched among rival diagnostics. In addition to its value in retinal disease, OCT has proven useful at assessing glaucoma via its telltale patterns of retinal nerve fiber layer (RNFL) degeneration.

Increased speed is the most noticeable improvement of the new software. An image captured on FastMap becomes immediately available on any remote viewing station. In addition, faster image capture reduces the time during which a patient's eye can move, thus increasing the prospect of obtaining a high-quality scan rapidly.

Another enhanced feature is the synchronized playback option. This allows the user to place two separate OCT images taken at different times adjacent to each other on screen. The practitioner can then scroll through the images simultaneously, one frame at a time, scrutinizing the data for small, subtle changes. Essentially, this feature amounts to a two-dimensional, synchronized b-scan.

Synchronized playback offers a clinical benefit to patients with macular degeneration, allowing localized areas to be tracked for disease progression. The comparison images do an exceptional job of delineating macular edema and sub-retinal fluid. Physicians might also employ this feature for managing vitreo-macular traction syndrome or edema secondary to a retinal vein occlusion. 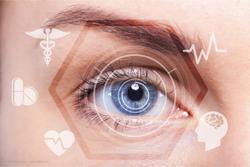