Cortical/cerebral visual impairment (CVI), a condition related to brain injury, is visual impairment resulting from damage to the visual pathways in the brain. Unfortunately, CVI is all too common, although it is not as commonly diagnosed.

And therein lies the problem.

CVI is the No. 1 cause of pediatric visual impairment and blindness in the US and developed countries worldwide,1 according to Lotfi Merabet, OD, PhD, MPH, an associate professor of ophthalmology at Harvard Medical School and director of the Laboratory for Visual Neuroplasticity at Schepens Eye Research Institute and Massachusetts Eye and Ear in Boston. Merabet is also on the board of directors, education committee, and CVI steering committee of the Perkins School for the Blind in Watertown, Massachusetts.

“There has been a fundamental shift in the clinical profile of visual impairment in pediatric populations, and the Perkins population mirrors this perfectly,” he commented.

From the 1950s to 1980s, children enrolled in the school were typically profoundly blind due to a disease or pathology at the ocular level, ie, infection, inherited disease, or retinopathy of prematurity. Over the past couple decades, a shift occurred with children presenting with a more complex profile—they were visual impaired and often had learning disabilities and motor and/or language issues. The source of those issues was not in the eye but from brain damage, he explained.

“This difference in pediatric blindness is important both from clinical and scientific standpoints as well as an educational standpoint,” Merabet emphasized.

Recognition of the source of the brain-based visual disabilities is the key to the early intervention in affected children. In light of that, Merabet and other researchers are attempting to determine the inherent differences in these children—specifically, how visual impairment caused by damage to the brain is different from visual impairment at the level of the eye.

What has been determined is that affected children may have sustained a neurologic complication or brain injury during the time of development, ie, around the time of birth or shortly thereafter. Some children may have had a stroke in utero or were born prematurely. Other causes include seizure disorder, trauma, and genetic/metabolic disorders.

Because of medical advances in neonatal care, many more of these children are surviving today than in the mid-20th century. In addition, today there is greater recognition of their perceptual and learning issues at the research level.

And that focus is extending that recognition into the clinics.

In a typical scenario, parents may report that their child cannot locate a favorite toy or cross the street or becomes overwhelmed in crowds or a busy classroom. In contrast, the child’s vision may be only moderately impaired or even normal based on a Snellen chart evaluation or visual perimetry, and the eyes appear healthy on slit-lamp evaluation.

This scenario often can lead the parents into the weeds, with suggestions of possible diagnoses including autism, development delays, or psychiatric issues, when the clinician does not recognize that the visual impairment is not based in the eye but is localized to the brain. This is the point at which these children begin to fall through the cracks.

Merabet and colleagues, in collaboration with Boston Children’s Hospital, Perkins School for the Blind, and Boston University Medical Center, are currently studying the brain scans of children with CVI to correlate any identified structural changes in the brain to the manifesting developmental and behavioral deficits and comparing the scans to those obtained from children with normal vision and those with other forms of ocular blindness (Figure).2

In their study, children are divided based on age: 7 years and older and 14 years and older. For the younger group, virtual reality and eye tracking are used to obtain an idea of their visual perceptual abilities by assessing functional vision. In this group, the children are tasked with, for example, finding a certain toy in the toy box or a particular person in a crowded hallway, and the complexity of the environment and the child’s reaction to it is assessed. As the environment increases in complexity, despite good visual acuity, their vision becomes a very confusing swirl of colors that prevents the differentiation of objects/persons.

Merabet uses virtual reality to create functional vision assessment tools that surpass the standard eye chart and tests performed in an ophthalmology or optometry clinic. “We found that the children are very sensitive to clutter, crowding, complex motion, and more interestingly, to visual demands. As the task becomes much more difficult—that is, as we make the assessment harder—their visual system breaks down,” he explained.

This point is important because although a visual assessment during a standard vision test indicates that these children may have normal visual acuity, when put into a situation in which the visual system is taxed, the system can break down and the hidden visual impairment manifests itself.

“This breaking down of the visual system in the setting of high visual demands and complexity is the telltale sign of CVI and highlights the difference between visual function and functional vision. We need to gain a better understanding of how these children use their vision in the real world,” he said.

The children who are 14 years and older undergo MRIs of the brain to see how their brains are “wired” (ie, white matter connectivity) and activate as a function of performing virtual reality tasks. “We found that their brains are very different from children with typical neurologic development and from those who are blind from other causes, emphasizing the need for education,” he said.

Another factor under investigation is why some children benefit from intervention and others do not and the time line of improvement. Part of the challenge here is determining how the cause of the CVI—brain injury, trauma, infection, seizure, or a genetic or metabolic disorder—relates to underlying visual impairment.

“This makes for a complicated patient profile, and every child is unique in terms of their challenges,” he pointed out.

No specific treatment currently exists for CVI. Early diagnosis of brain-based visual impairment and implementation of strategies to promote maximal brain development are the current focus, but there is no strong evidence yet to support what does and does not benefit these patients.

“This is a great challenge because much more than vision can be involved. It is important to use a multilevel approach that does not just consider vision, but also language and increasing cognitive function and self-awareness in general. The goal is to promote as much brain development as possible,” he advised.

In his lab, the researchers attempt to develop novel assessment tools and compensatory strategies to better understand the difficulties that the children face and to work around their challenges.

Perkins has created the CVI Center at Perkins to bring researchers, educators, medical professionals, and parents together to make a concerted effort to recognize the brain impairment in these children as quickly as possible and ensure they have access to the effective interventions they need while driving groundbreaking research in the field.

At Perkins, the resources are being focused on how to assess and educate children with CVI and how this disorder is fundamentally different from children with eye-based visual impairment. Fifty-two percent of the Perkins population has CVI.

Jessie Cronan, senior director of Perkins CVI Now, described a new, ambitious 2-part effort spearheaded by Perkins, the first phase of which will be released in May 2022.

“The protocol is a groundbreaking digital assessment tool that was created out of a series of symposia with leaders in CVI [who] convened beginning in 2018,” she said.

The collaborations among the experts highlighted the huge gap that exists around CVI knowledge and diagnosis and that it is a problem approaching epidemic proportions that is largely unknown even by experts in visual impairment. Cronan explained the challenge identified is 2-fold: providing both education about CVI and functional baseline assessments and diagnostic tools for families, teachers, and physicians.

This recognition generated the Perkins CVI Protocol, which fills the education gap and provides a database of information to support educators and physicians in the US and worldwide. “The teaching and diagnostic assessment tool that was created has enough embedded educational resources for educators to learn about the disorder [and is] easily accessible and sufficiently well structured to be reliably valid and useful for those with all levels of understanding about CVI,” Cronan explained.

This tool is designed to provide more of a “whole child” diagnostic assessment of CVI than previously available and to identify children who may not have been previously diagnosed.

Part 1 is an anonymous data medical file review that compiles all the basic information about each patient and facilitates amassment of demographic information in the database that can be shared with researchers.

From this database, a lengthy list of questions was compiled to be used with parents that looks at 16 visual behaviors, the result of which is a functional visional assessment (customized student sketch) of the individual’s visual behaviors, what the experienced behaviors may mean, and recommendations for that patient.

The tool includes links to videos/articles about the visual behaviors and scientific reports, tutorials, and lists of online learning courses.

This part also generates a letter to be sent to patients’ eye care providers to include them in the assessment of possible CVI to access care.

Part 2 is an education roadmap that is currently under development and validation and is expected to be rolled out in early 2023. It will incorporate everything from part 1 and create a series of recommendations for observations and direct assessments that will generate an in-depth report and provide a set of educational recommendations.

“This report will inform independent educational plans, which are core to special education,” Cronan said.

A conference on CVI is scheduled for June 26-28, 2022, in Boston, Massachusetts. (For more information or to register, go to: https://www.perkins.org/event/cvi-collab-conference/#register.)

“The goal is to identify and diagnose these children earlier and follow them closely to obtain the best benefit,” Merabet said. “Identifying them when they are in their teens may mean that valuable time has been lost, although it is never too late.”

Merabet has no financial interest in this subject matter; Cronan is an employee of Perkins School for the Blind. 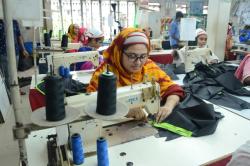