Library of ViewPoint drug candidates will accelerate development of novel alpha-crystallin chaperone compounds as a non-surgical treatment for age-related cataracts.

Visus CEO Ben Bergo announced the information today during a presentation at the Eyecelerator meeting at the American Academy of Ophthalmology conference in Chicago.

Presbyopia is an inability to see near objects clearly, due to a loss of lens elasticity, that begins in the 40s and inevitably worsens with age. As protein misfolding worsens, cataracts, or clouding of the lens, may develop that can affect all vision-related activities. Alpha-crystallin aggregation inhibitors are intended to restore elasticity and lens clarity, potentially reversing presbyopia and cataracts without the need for surgery.

According to Bergo, the ViewPoint assets will enhance his company’s pipeline.

“The ViewPoint assets are a natural complement to this late-stage program and will enable the company to further expand its pipeline targeting the leading causes of age-related vision loss,” he said.

Rhett M. Schiffman MD, MS, MHSA, noted in the news release that the company has

already demonstrated that intraocular delivery of alpha crystallin aggregation inhibitors reverses age-related cataracts in primates, forming confidence that this approach may be effective in humans.

“It may even be possible that intervening in presbyopia may not only restore near vision but prevent the development of cataracts in many patients,” Schiffman said in the news release. “The ViewPoint acquisition provides an extensive library of potent drug candidates with highly desirable pharmaceutical properties for ocular delivery.” 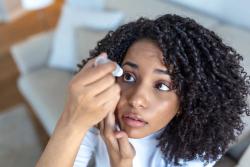 Study: One of two macular degeneration drugs outperforming other at weaning patients off treatment at one year
Advertisement