Genotyping and artificial intelligence are together starting to predict the progression of glaucoma in individual patients, sparing them from suboptimal treatments and adverse effects. Recent research efforts are exploring modifiable risk factors such as caffeine consumption.

I have previously interviewed glaucoma specialist Anthony Khawaja, PhD, MA (Cantab), FRCOphth, on the therapeutic area of precision medicine, and I was interested in talking with him again to revisit the rapidly developing field and discuss the latest promising research. Here is our interview.

CR: Why is there a need for precision medicine in ophthalmology?

AK: Because the way we currently practice medicine is very much evidence based, which, as I will describe, has its shortcomings. We all know that the highest-quality evidence comes from randomized controlled trials. For example, the ocular hypertension treatment study [randomly assigned] people with ocular hypertension who did not have glaucoma to eye pressure lowering or no eye pressure lowering.2

Those whose eye pressure was lowered had a dramatically reduced chance of converting to glaucoma over the subsequent 5 years. This means that if we treat everybody with ocular hypertension, fewer people will convert to glaucoma.

However, around 90% of untreated people did not convert to glaucoma. Therefore, if we treated everybody with ocular hypertension, as [findings from] the randomized controlled trial might suggest is a good idea, then we would be treating many people unnecessarily: some would benefit but others would receive treatment they did not need. And, of course, some people will develop [adverse] effects to the treatment, and treatments have costs to the health care providers and to the patients, depending on the health care setting.

Another similar example is the United Kingdom Glaucoma Treatment Study (UKGTS), [whose data] showed that treatment with latanoprost can halve the chance of established open-angle glaucoma getting worse, compared with placebo.3 This, again, suggests that if all patients were the same—if everyone was average—then treating them would be a good idea.

But not everybody is the same and three-[fourths] of people in the placebo group in this study did not measurably progress over the 2-year study period. This suggests that some people who fulfil our diagnostic criteria for glaucoma might not actually need treatment.

On the flip side of that, 15% of the people who received latanoprost progressed, meaning that they perhaps needed a different treatment or a more intensive treatment strategy. The overall message here is that evidence-based medicine is great to tell us what is best to do on average, but not what is best for an individual patient.

There is a great picture of Barack Obama from when he was launching the Precision Medicine Initiative in 2015.4 He stood by a model of DNA, the double helix, since one of the key enablers for personalising our approach to managing patients lies in genetics and genomics: leveraging an individual patient’s genetic code to better understand how they will individually respond to different treatment strategies.

One reason that this is an exciting time for personalised or precision medicine is that measuring the genetic code has become so cheap: You can have it done at a local high street pharmacy in the UK for less than £150 [$174].

One genotyping study that is going to start in the UK soon, called the Our Future Health study,5 will measure common variations in the genetic code in 5 million adults at a cost of around £20 [$23] each. This 1 test can inform us about how best to manage people at risk of not only common blinding eye conditions but also cardiovascular disease, dementia, breast cancer, prostate cancer, and almost any medical condition you can think of. This demonstrates that we are at a very exciting point in time in precision medicine and I think we are going to see big changes within the next decade.

What specific benefits can precision medicine bring to glaucoma patients?

We usually assess a person’s personal risk according to how bad their glaucoma is when they first present, but we tend to have to monitor them for at least a couple of years before we can fully or better understand that risk.

Genetics will help us stratify our patients right from the outset, to better identify those who will be on a downward trajectory in 5 years’ time, so we can treat them better, and those who will have barely changed in 5 years—the really low-risk patients who we can spare [from] the costs and [adverse] effects of treatment, freeing up precious health care resources and giving the glaucoma specialist time to focus on patients who have a much higher risk of going blind.

Given the rapidly increasing number of [patients with] glaucoma and our limited health care resources, we need these kinds of innovations. This is not a hope but an absolute must. Secondly, we have so many different glaucoma treatments now: many classes of drops, different forms of laser, [and] different forms of surgery from very minimally invasive to highly effective but much more invasive and risky.

However, we are not very good at predicting who will respond well, and we tend to treat patients in a trial-and-error manner. It is rare that a patient comes to severe long-term harm from this—[adverse] effects are often temporary—but it does not provide patients with a great experience and is also a massive waste of resources.

There is growing evidence to suggest we can predict using genomics who will respond well to treatment such as selective laser trabeculoplasty. Work is…ongoing, so watch this space!

What research are you most excited about at present?

I am really excited about genetic data, not just from patients with glaucoma versus patients without glaucoma, but also from patients with established glaucoma, where we know what their treatment pathway has been, their response to treatments, and their vision loss trajectory. Once we have these large data sets, we can start to accurately validate prediction algorithms that incorporate genetics for clinically meaningful outcomes such as risk of progression, rate of progression, and response to different treatments.

Another exciting area is modifiable risk factors for glaucoma. Knowing which lifestyle factors influence glaucoma risk has been a challenge, as studies have tended to be small and results inconsistent. But now, with large studies such as the UK Biobank,6 we are better able to ask these questions.

We recently brought together a multidisciplinary collaboration of nutritionists, nutritional epidemiologists, statistical geneticists, ophthalmic epidemiologists, and glaucoma specialists from multiple institutions around the world, such as Harvard [University], Mount Sinai, the Pasteur Institute, and beyond.

The first thing we looked at was caffeine, partly because all the investigators enjoy consuming caffeine. We were interested to know whether it influences the pressure in the eye and the chances of having glaucoma.

A high genetic risk of glaucoma is in some ways a proxy for how well developed the aqueous fluid outflow channels are: If they are not adequately developed, such that they are starting to fail at an older age, then the outflow channels cannot handle the additional aqueous that is produced as a result of consuming more caffeine. This pushes up the pressure and increases the chance of developing glaucoma.

Interestingly, we found that there does not seem to be a strong association in the population overall, other than when you focus on people at high genetic risk of glaucoma. So only in the high-risk people, who can be determined with inexpensive genotyping tests, [is] high caffeine intake associated with a higher eye pressure and a greater chance of having glaucoma.

What does this mean for patients? Currently, if a patient’s glaucoma is well controlled, I certainly would not advise them to stop consuming caffeine or reduce their caffeine intake. But if a patient is getting worse despite best medical or surgical treatment, then I think they need to know this information. I would say that, although it is not proved, if you do consume a lot of caffeine, you may wish to consider reducing or stopping, given what we know.

It may work, it may not work; but certainly if I was a patient and I was getting worse despite all best efforts, this is the type of information I would like to know. In the future, I think we will be giving people lifestyle advice according to their genotype.

Where does artificial intelligence (AI) fit in?

We have used AI to look at retinal photographs of patients in the UK Biobank. Doing this, we processed around 80,000 photographs in less than a day, assessing whether there are features of glaucoma and measuring the vertical cup disc ratio. This is something which would take a decade for human graders to undertake.

Genetic data are available for everyone in the UK Biobank, so this allowed us to carry out the largest genome-wide association study for vertical cup disc ratio,7 identifying many new genetic markers for glaucoma. These genetic markers were very predictive for glaucoma prevalence in the independent EPIC-Norfolk study [European Prospective Investigation Into Cancer in Norfolk Prospective Study; NCT03424668].8

The other thing with AI is that it will complement genetic prediction models. Currently, using all our clinical skills, OCT [optical coherence tomography] scans, and visual fields, we can only phenotype a patient so far. There are extra clues in their genetic markers that will tell us about that patient’s profile, their prognosis, their susceptibility to disease, and their response to different treatments.

There are also hidden signatures that humans cannot currently interpret, while AI can. So I think that AI assessment of imaging in particular is going to give us some extra clues that can further help personalize the care of our patients.

Where will we be 10 years from now?

I think we will have started pilot programs in which health care users meeting quite broad criteria are genotyped, which will inform personalized care strategies. For glaucoma, it might be a personalized screening strategy.

For example, patients with the top 10% risk of glaucoma might be advised to start having annual eye checks at the age of 40, whereas the bottom 10% will not have any specific eye tests and will just go to the optometrist opportunistically. People who are somewhere in the middle might start at the age of 50 and be screened every 2 years.

In 10 years, the best management is going to be an intersection of genomic prediction models and AI models.

Khawaja is an associate professor at University College London Institute of Ophthalmology and honorary consultant ophthalmic surgeon at Moorfields Eye Hospital NHS Foundation Trust in London, UK. He is supported by a UK Research and Innovation Future Leaders Fellowship and an Alcon Research Institute Young Investigator Grant. He reports acting as consultant to Aerie, Allergan, Google Health, Novartis, Reichert, and Santen and has received lecturing fees from Grafton Optical and travel support from Théa. 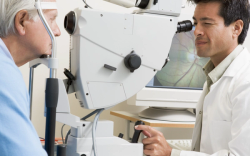