TCT can offer survival benefits for patients with a wide range of cancer diagnoses.

This article was reviewed by Nagham Al-Zubibi, MD

Targeted cancer therapy (TCT) has the potential to cause ocular toxicity, early recognition of which may prevent irreversible damage to the eye.

“TCT is a major advance in oncology and has significant survival benefits for patients with metastatic melanoma, renal cell carcinoma, non–small cell lung cancer, Hodgkin lymphoma, and other neoplasias,” said Nagham Al-Zubidi, MD. “TCT is unique in that it works by manipulating the immune system, blocks growth of cancer cells, and interferes with specific signaling and angiogenesis pathways involved in carcinogenesis.”

IRAES
Despite those benefits, TCT is associated with a wide spectrum of autoimmune reactions known as immune-related adverse events (irAEs), which occur frequently and are becoming more relevant in patients treated with targeted therapies. Ocular AEs are among the most common, Al-Zubidi pointed out.

The eye, Al-Zubidi explained, may be more susceptible to development of irAEs because of its delicate homeostatic environment of growth factors and cell receptors; its highly differentiated ocular structure, in which more than 90% of the genes in the human genome are expressed in 1 or more of the ocular tissues; and the possibility for vascular formation in the eye.

In light of these observations, Al-Zubidi and colleagues conducted a large case series study to assess the distinctive nature of ocular irAEs of specific targeted cancer therapy at MD Anderson Cancer Center, a tertiary cancer center.

The investigators retrospectively reviewed the medical records of patients who presented to the ophthalmology clinic between January 2010 and December 2019. Nine classes of targeted therapy were analyzed to identify the irAEs.

During the course of the study, the investigators evaluated the frequency of the ocular adverse events in each treatment class and the percentages of drugs associated with the ocular AEs in each class, she recounted.

Related: Where to start with treating OSD patients

Results
The investigators identified 6354 patients out of 22,726 referred for clinical research to the ophthalmology clinic during the 10-year period. Of these, 2835 received TCTs.

The most common symptoms reported by the patients were blurred vision and visual disturbances. Most of the TCTs were associated with grade 1 to 2 toxicities.

The following TCTs were associated with the highest numbers of irAEs:

The irAEs included a high percentage of serous chorioretinopathy, dry eye, and keratitis.

A total of 60 AEs were reported among a cohort of 323 patients, Al-Zubidi said.

In addition to the drugs that caused the most IRAEs, Al-Zubidi pointed out that TCTs frequently tended to be highly specific for their molecular target, and therefore, their IRAEs tended to be more focal and specific than systemic. Importantly, investigators have found that most of the TCTs are associated with low-grade toxicity.

Conclusions
Al-Zubidi noted that ophthalmologists should be aware of and recognize symptoms of potential ocular toxicity because the numbers of referrals are expected to increase, the result of an increased number of TCTs and more frequent usage, and early recognition may avoid irreversible damage.

The irAEs may seem indistinguishable from the direct effects of the cancer itself or its indirect complications.

“Recognition and differentiation of these complications are important for proper patient care and treatment,” Al-Zubidi concluded. “A baseline ophthalmic examination before treatment may identify any preexisting ocular conditions and result in reduced ocular adverse effects during and after cancer therapy. Further work should provide recommendations for screening, surveillance, and management of these irAEs.” 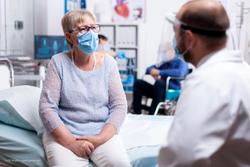