Investigators note the need for less medication over 12-month period 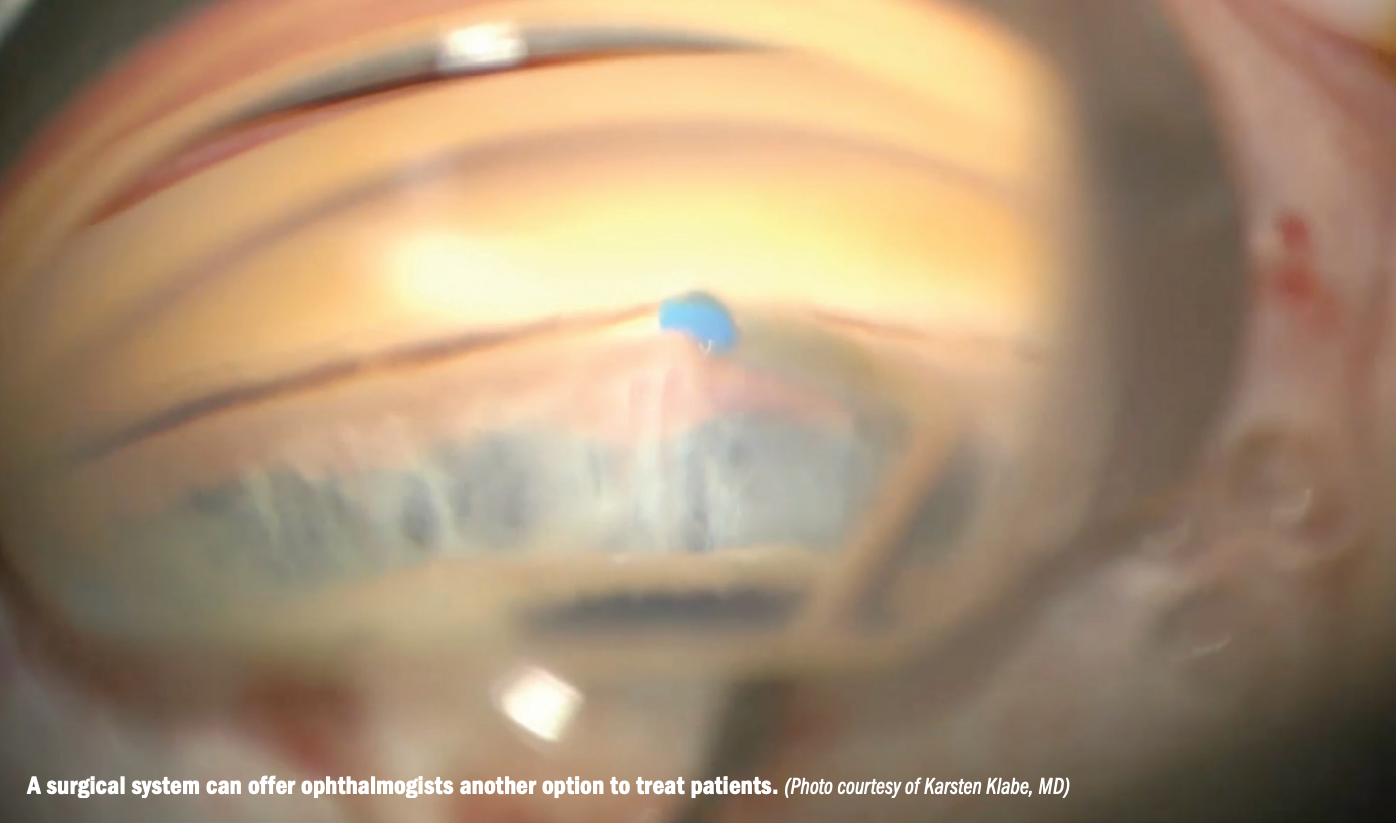 This article was reviewed by Karsten Klabe, MD

Use of a surgical system (Omni Surgical System, Sight Sciences Inc.) to treat patients with primary open-angle glaucoma (POAG) resulted in significant lowering of IOP and the need for medication over a 12-month period, with 75% of patients classified as having complete success.

Most of the many commercially available devices to treat mixed and lower levels of IOP intervene in the disease process while reducing the outflow resistance in trabecular meshwork and Schlemm’s canal.

Related: IOP homeostasis in glaucoma: Looking below the surface

“The OMNI surgical system, however, is the only one that offers 2 approaches to lower the IOP, the first via trabeculotomy and the second via ab interno canaloplasty,” said Karsten Klabe, MD, who is in private practice in Dusseldorf, Germany, and a partner in the International Vision correction Research Center Networks of the Universitäts-Augenklinik Heidelberg in Germany.

The Omni device combines both procedures. The applicator’s tip has a cannula that delivers a microcatheter, which is used to inject a viscoelastic that dilates Schlemm’s canal.

A consideration, he commented, is the rationale behind addressing the outflow resistance in both the trabecular meshwork and Schlemm’s canal and the collector channels. In Klabe’s opinion, this is a good approach.

“Schlemm’s canal is not a simple tube; it has a cylindrical structure that may occlude the canal, and the collector channels have a valvelike mechanism—ie, the hinged collagen flaps—that may increase the outflow resistance,” he said.

Related: Traditional glaucoma surgery in the era of MIGS procedures

A 2-step procedure
Klabe demonstrated opening of the trabecular meshwork with insertion of the cannula’s tip. The catheter is introduced and pushed forward about 180°; with its retraction, the viscoelastic is injected.

In a second step, the catheter is reintroduced into Schlemm's Canal and the trabecular meshwork is opened while removing the cannula.

Typically, the hyphema that develops at the end of the procedure can be easily washed out using balanced saline solution, and the eye can be pressurized to prevent severe anterior chamber bleeding, he said.

Positive safety profile
Klabe and his team conducted a prospective 12-month study of patients with POAG in which the Omni device was used.

The primary end point was the percentage of patients with a 20% decrease in IOP compared with baseline and no need for medication.

The secondary end points were the percentage of patients with IOP between 18 mm Hg or less and 6 mm Hg or higher, the percentage who had ocular hypertension and did not use IOP-lowering medication or used at least 1 fewer drug than previously administered, and the number of surgical procedures needed to achieve IOP control decreased, Klabe recounted.

The study also sought to identify any ocular adverse events and the best-corrected visual acuity.

Related: Next frontier in glaucoma: Beyond IOP-lowering treatments

The investigators observed a slight increase in the IOP 1 week postoperatively, possibly due to a steroid response.

Pilocarpine 0.5% is recommended for about 2 weeks postoperatively to prevent anterior synechiae and reocclusion of the trabecular meshwork.

Hyphema was the most frequent complication in almost half the eyes and resolved spontaneously in all affected eyes in 1 week.

Hypotony and anterior synechiae developed in 2 eyes each during the first week after surgery, and lens touch developed in 1 phakic patient, Klabe explained.

Investigators observed significant lowering of IOP and reduction of medications over the course of the 12 months, Klabe said.

The 1-year data are promising, he added, pointing out that long-term data are needed.