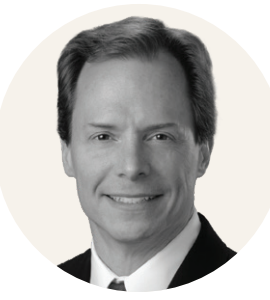 We are fortunate that all of our contemporary phaco machines have incorporated advances that improve chamber stability and prevent post-occlusion surge.

Each generation is a little better than the previous, so it is worthwhile for surgeons to stay current with the most recently available phaco technology.

Chamber stability is highly reliant on the small details that we generally take for granted in a routine surgical day. Here are 7 ways to ensure greater chamber stability:

In my opinion, leaky incisions (particularly side-port incisions) are the top contributor to chamber instability.

Most of us think our wounds are tight. But if you watch your own surgical videos, you’re almost certain to see some leaky incisions, especially in a case where the chamber didn’t feel as stable as you’d like.

To address this problem, I designed the Dewey Horizontal Femto Chopper from Katena (no financial interest).

Because the head and the shaft of the instrument are the same size, you don’t have to make your incision bigger just to get the instrument inside the eye.

For surgeons having challenges with sideport incisions, Ken Rosenthal taught me a trick to avoid oar locking and wound leak: the wasp incision.

Originally, he used this incision with biaxial phaco, but the concept works with any incision.

To craft this incision, the blade is inserted at a 30º angle, with the tip of the blade placed at the limbus and angled slightly anteriorly.

This provides an hourglass or wasp-shaped incision in which both the internal and external ostia are wider, allowing for easier insertion of instruments, and less oar-locking with instrument manipulation, but the narrow wasp waist provides the confined fluidics of a smaller incision.

Unfortunately, the technique won’t overcome a chopper design with a distal element larger than the shaft.

2. Avoid air in the tubing

With older phaco machines, a kink in the infusion line could be disastrous. Tubing has improved a great deal, to the point that there is very low risk of leaks or kinking with any of the phaco systems.

However, accidentally getting air in the tubing can facilitate a chamber collapse.

This can be due to an improper seal with the handpiece, or a failure to prime the system properly, but it can also happen when the surgeon momentarily withdraws the phaco needle from the eye while the foot pedal is still in position 2, pulling compressible air, rather than fluid, into the aspiration line (for example, a patient moving their head opposite the incision will remove the needle tip from the eye, even if the instrument is held steady).

When the phaco tip goes back in the eye to continue the procedure, there can be a sudden chamber deflation as that bubble suddenly clears the system.

3. Reduce the bottle height when needed

I tend to keep the infusion bottle near maximum height and appreciate the additional infusion pressure I can get from advanced gas-forced infusion.

However, I consider lowering the bottle height in certain cases, such as a high myope with a very distensible anterior segment, an open posterior capsule, or when I suspect weak zonules, such as pseudoexfoliation or a post-vitreoretinal patient.

The lower bottle height will decrease turbulence, as long as you also commensurately reduce the aspiration rate and vacuum to prevent post-occlusion surge.

One of my worst phaco complications was a significant wound burn that occurred in the late 1990s. The irrigation line had become detached from the handpiece. I was attempting my first phaco flip, delivering phaco power as I had been instructed.

While I wasn’t seeing much activity in the anterior chamber, the chamber seemed incredibly stable. It would have been more helpful had the chamber collapsed and I had been alerted to the critical failure in fluidics.

Unfortunately, what I was actually seeing was pseudo-stability from a combination of a nuclear fragment and dispersive viscoelastic (OVD) blocking the aspiration.

There is much less chance of a wound burn with contemporary systems, but it is still important when using a dispersive OVD to irrigate a little of it away from the anterior surface of the lens, or aspirate it prior to engaging nuclear material.

The OVD will still protect the corneal endothelium, but the space created will also allow for the exchange of fluid with the movement of nuclear fragments—visual confirmation that it is truly the fluidics stabilizing the chamber. 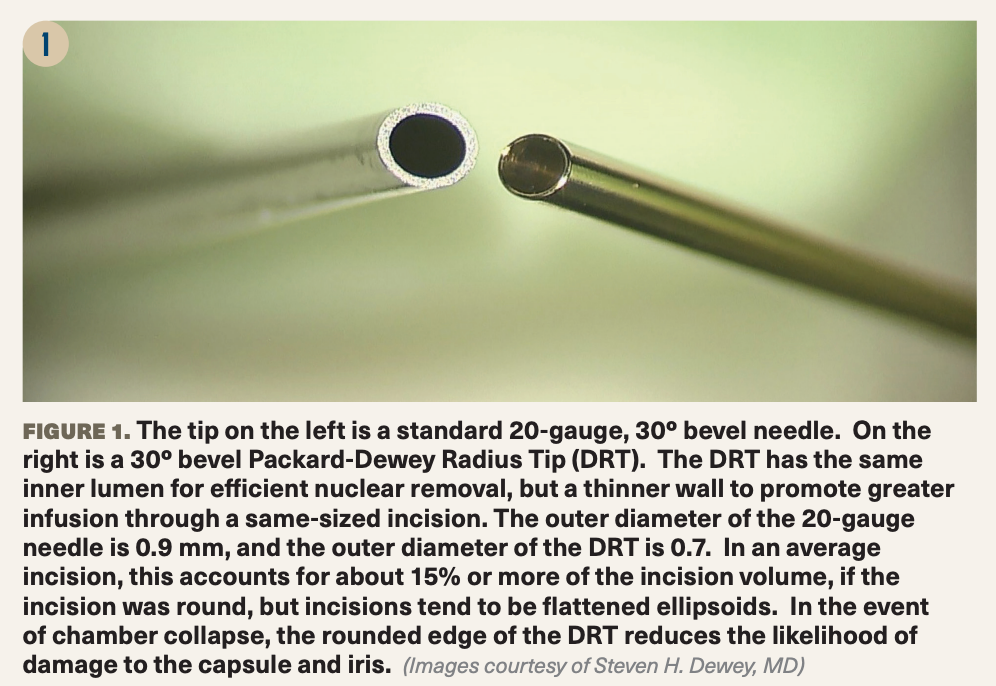 Smaller-bore needles do one thing very consistently—they restrict and manage flow. For a long time, I was quite pleased with a 19-gauge phaco needle, because I didn’t realize how much better the fluidics could be with a 20-gauge needle.

When moving to the smaller-bore tip, the nuclear material seemed to be disappearing more slowly, but when I reviewed the videotaped cases and timed the nuclear removal, I found there was no increase in case time—just a more controlled emulsification.

The more restricted flow through the 20-gauge needle helps to keep the chamber very stable.

Currently, my phaco needle of choice is the Packard-Dewey Radius Tip (Figure 1) from MicroSurgical Technology.

It has a 22-gauge outer diameter and a 20-gauge internal lumen, which means that I get the evacuation efficiency of a 20-gauge needle, but am still able to maximize my infusion through a 2.2-mm incision due to the smaller exterior diameter, providing excellent chamber stability. 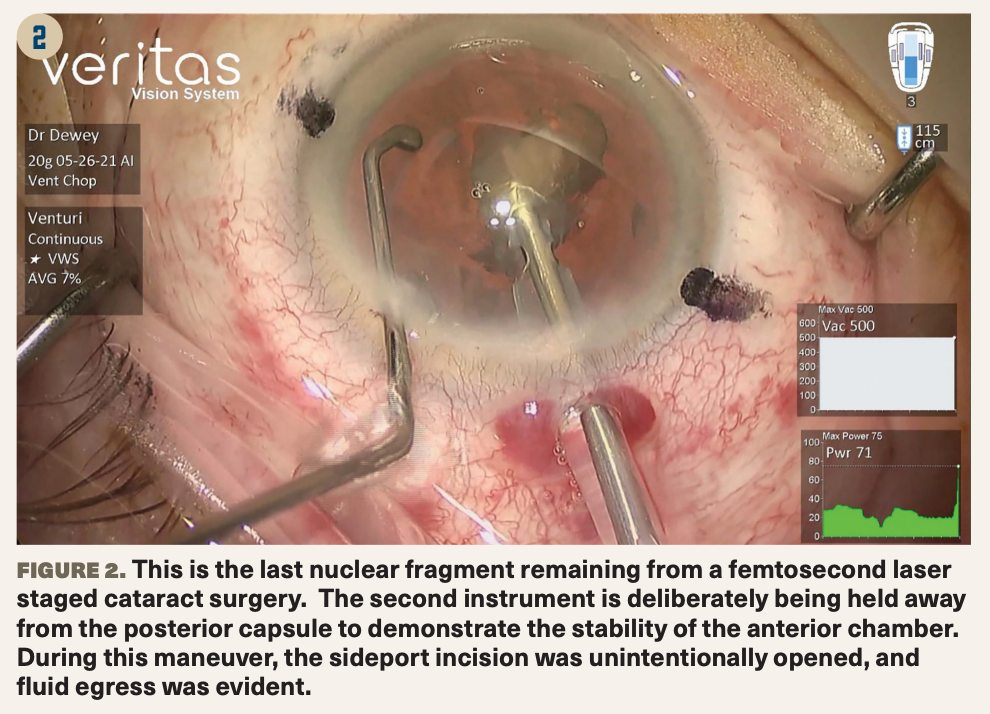 6. Don’t shy away from high vacuum

It is true that “low-flow, slow-mo” phaco does increase chamber stability, but that low-vacuum stability comes at the cost of ultrasound energy efficiency.

Moreover, this approach enlists the capsule and zonules as the point of resistance to support the nucleus when creating apposition to apply ultrasound.

With higher vacuum levels, nuclear fragments are locked on to the tip and phaco energy is transferred directly to the nucleus, with very little tension on the zonules.

For chop techniques, this means the nucleus can be drawn up on the phaco needle.

For divide-and-conquer techniques, one can start out with lower levels of vacuum to trench, but once the nucleus is split into quadrants, that is a good opportunity to increase the vacuum.

In my first group of Veritas cases, I was able to safely utilize >500 mm Hg of Venturi vacuum while maintaining a rock-solid chamber, without chamber bounce.

7. Be aware in zero-power cases

Without question, the goal of reducing ultrasound power is a good one, but it can lead to complacence.

At the extremes—very soft or very dense nuclei—surgeons know to expect very little risk of occlusion in the former and a greater risk of chamber instability in the latter.

But unexpected post-occlusion surge can happen when attempting to remove a moderately dense, 2+ or 3+ nuclear sclerotic lens with minimal power. The fluidics will go a long way toward fragmenting this type of lens.

It is possible to get a “plug” of nuclear material that is almost a cookie-cutter fit to the lumen, which can create an occlusion and shallow the chamber once the occlusion breaks.

Using even low levels of nonlongitudinal, transverse phaco modes is a way to avoid this problem. The tip of the needle impacts the material at an angle.

Again, maintaining chamber stability is all about the details. By following these steps, you can refine your own results and conquer chamber instability.

About the author
Steven H. Dewey, MD
E: deweys@prodigy.net
Dewey is the head of the Colorado Springs Eye Clinic in Colorado Springs, Colo. He is a consultant to Johnson & Johnson Surgical Vision and receives royalties from MicroSurgical Technology.