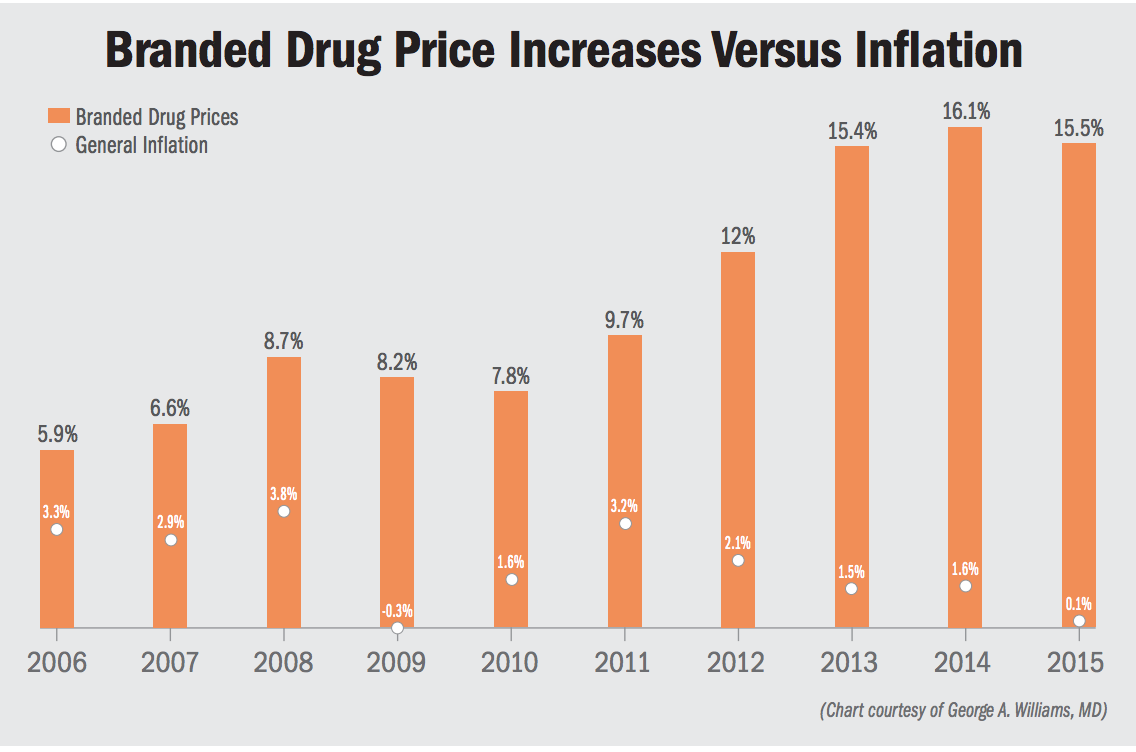 This article was reviewed by George A. Williams, MD

For ophthalmology practices, drug prices continue to be an issue for patients, and step-therapy and pre-authorization are responses to increasing drug costs, which exceed any other component of healthcare.

While inflation is less than 2% per year, name brand drug price increases reach double digits year after year, according to George A. Williams, MD, president of the American Academy of Ophthalmology.
That leaves industry leaders to wonder why.

The argument has always been that it is expensive to develop drugs, to innovate and invest in necessary research, said Dr. Williams. who also is chairman of ophthalmology at Oakland University. “Although true, the real relationship between marketing and administrative costs for pharmaceutical companies compared with what they spend on research is approximately two to one,” he said. “Worldwide and during the past decade, there has been a static relationship between research investment and sales, averaging around 15% to 18%.”

Return on investment?
The FDA approves about 200 new drugs every year, with only 15 to 50 classified as new molecular entities, or NMEs. The FDA says that NMEs contain active moieties that have not been approved by the FDA previously, either as a single ingredient drug or as part of a combination product.

“Some drugs are characterized as NMEs for administrative purposes, but nonetheless contain active moieties that are closely related to active moieties in products that have previously been approved by FDA,” according to the FDA website.

One reason for this gap could be the U.S. patent system, Dr. Williams said.

Experts have argued that drug prices keep increasing because pharmaceutical companies are running out of new agents that can command premium prices. One detailed analysis reveals that as some higher-end drugs come off-patent, manufacturers have responded by increasing the price of drugs that remain on patent.

“The system is set up to generate profits, not research and innovation,” Dr. Williams said.

The majority of the costs are attributable to a relatively small number of drugs, he explained.

“For Medicare Part B and Part D-where glaucoma patients live-the per capita growth rate for drug cost is 10% per year. Profit margins for the top 25 drug makers are robust, and these companies have consistently doubled the profit margins of all other companies in the Fortune 500,” Dr. Williams said.  “There appears to be bipartisan support for addressing this issue.”

Previously by Conni Bergmann Koury: Reimbursment remains a hurdle for teleglaucoma in United States Pre-authorization
Pre-authorization, familiar to all physicians and ophthalmology practices, can involve drugs, devices or surgery. It is granted about 90% of the time, but it is still an impediment to patients’ access. This has piqued the interest of Congress, and the AAO has been advocating for standardization with follow-through in the pre-authorization environment.

Step-therapy
“Step-therapy, a potential game-changer in the drug space, comes from the Centers for Medicare and Medicaid Services decision to allow Medicare Advantage (MA) plans the option of implementing step-therapy across all Part B drugs, including off-label compounded treatments,” Dr. Williams said.

Many questions remain, however, such as: What constitutes a trial or treatment failure? How much vision does the patient have to lose (or not gain)? What happens with the fellow eye?
“These questions create access issues for patients,” Dr. Williams said. “The Academy has been involved in step-therapy for years and will continue to speak to policy makers about the need for consistent, patient-centered coverage policies.”

There remains significant variation in coverage, however, and only 16% of drug indications are covered by all plans, Dr. Williams noted.

A comprehensive analysis indicates that less than half of drug indications are covered by 75% or more of commercial carriers. Prescribing protocols are consistent with the FDA label barely half of the time; they are more restrictive a third of the time; and 5% of the time there is no coverage even when FDA approved, according to Dr. Williams.

The AAO has written to the CMS expressing concern about the impact this has on patients’ access to care, Dr Williams noted. Changes to MA, according to a recent Office of the Inspector General report, may incentivize payers to deny access to services and payment in order to increase the profit of these private companies. In fact, 75% of the denials the MA plans implement that are appealed are reversed, but only 1% of the denials were actually appealed.

The OIG concluded that “this is especially burdensome for beneficiaries with urgent health conditions.” This issue is likely to become more significant with the continuing expansion of MA. In 2018, 35% of Medicare beneficiaries were in Medicare Advantage with some states as high as 60%, Dr. Williams said.

Related: Lack of Medicare coverage leads to less eyeglass use, study findsProposals
One possible solution is to have Americans pay what other countries pay.

“In the United States, we pay approximately 80% more for all drugs-in the retina space, it is substantially more.” Dr. Williams said. “With Medicare part D, patients pay the first $415. Medicare pays 75% of the next 3,800. After that, patients go into the donut hole.”

The ever growing gross-to-net rebate bubble is the difference between the manufacturer’s list price and the net price, after negotiated rebates and discounts decided by pharmacy benefit managers (PBMs). Last year, it was $166 billion.

“This can produce perverse incentives for drug companies to raise  prices and increase discounts, because PBMs are paid by insurers based on the amounts they negotiate for each discount,” Dr. Williams concluded. “These discounts are supposed to be shared with either the insurance provider or with the patient-but it turns out they are not, and our patients pay co-pays on the inflated price. This rebate bubble has exploded in recent years, from $59 billion in 2012 to $126 billion currently.”

George A. Williams, MD
p: 248/288-2280
e: George.Williams@beaumont.edu
This article was adapted from Dr. Williams’ presentation at the 2019 American Glaucoma Society annual meeting. Dr. Williams has no other financial disclosures related to this report.