Every eye injury on Game of Thrones, ranked

"If you think this has a happy ending, you haven't been paying attention." - Ramsay Bolton.

I’m excited to see what the finale of “Games of Thrones” has in store, because it looks like Cersei Lannister isn’t the mad queen after all. They tried to warn us about Daenerys Targaryen! Does this mean Jon Snow, heir to the Iron Throne, will rule Westeros? And, most important, will fan favorite (OK, maybe he’s just my favorite) newly minted Lord Gendry Baratheon of Storm’s End survive?

After giving the series a thorough re-watch to prepare for the final season, I noticed a dizzying amount of eye injuries. Maybe it’s just because I work in the eye care field, but once you see them, it’s hard to not to notice. Please note, if you’re not caught up, there are spoilers ahead.

In training her to become an assassin, or “No One,” Jaqen H’ghar warns Arya Stark not to kill anyone who is not marked for death by the Red God. However, Arya disobeys him and murders Trant after some personal beef. (Trant murdered her dancing instructor, Serio Forel, back in season 1.)

After Jaqen finds out, he reprimands her and says that putting on a face if you are not “No One” is like poison, and blinds Arya as punishment. However, it’s only temporary, and she regains her sight.

The Mountain may have won his trial by combat with Oberon Martell in season 4, but he didn’t walk away unscathed. Oberon’s sword was covered in Manticore venom, which caused The Mountain’s wounds to fester and become fatal.

Qyburn successfully revived him, but these treatments zombified him. A noticeable change is that his sclerae are blood red and his irises are yellow. This doesn’t bode well for him if he’s going to be a contender in Clegane Bowl. His vision needs to be razor sharp!

UPDATE: Clegane Bowl delivered. If you haven’t watched S8E5, you can watch Sandor “The Hound” Clegane take out his brother here. Believe the hype. It was awesome.

Before you wonder why this is on here, hear me out: The Three-Eyed Raven was a Greenseer with the ability to see into the past, present, and future. When the White Walkers killed him, the knowledge of unlocking secrets to Westeros' history went with him.

Luckily, the powers were passed on to, in the words of Jon Snow, "Whatever Bran is now," but Westeros almost lost key information about its past.

We’ve only ever known Beric with one eye, but the backstory here is pretty gruesome: After he was captured by Lannister soldiers, they stuck a dagger through his eye and killed him. He was revived by Red Priest Thoros of Myr, but his eye never grew back. At least he has a cool flame sword, though!

Lowell was one of Polliver’s men-at-arms who fought for House Lannister. He met his end when Arya and The Hound stop at an inn by chance and run into Polliver and his men. Polliver taunted The Hound and threatened Arya, and in the ensuing brawl The Hound stuck his sword in Lowell’s eye. Woof. Wrong place, wrong time.

For all you It’s Always Sunny in Philadelphia fans, this entry is for you! Rob McElhenney, who co-created the series and stars as Mac, made a swift cameo as one of Euron’s Greyjoy soldiers tasked with guarding Euron’s prisoner/niece, Yara Greyjoy.

Theon Greyjoy, who finally got to cash in on his redemption arc, rallied the remaining Ironborn to free his sister. McElhenney’s character took an arrow to the eye, thus squashing our hopes he’d be back to teach Drogon how to cultivate mass in the series finale.

Wun Wun was a giant living with the Free Folk beyond the wall, and he was a key player in helping Jon Snow take back Winterfell from human gargoyle Ramsay Bolton. Unfortunately for our boy Wun Wun, he was attacked by Bolton’s men. Already bogged down by their arrows, all it took was for one more to sail into his eye and seal his fate.

If you don’t remember Jory, well, that’s OK because most people don't-he met his demise all the way back in season 1. Captain of the guard for House Stark, he died protecting Ned Stark in King’s Landing after Ned declared Cersei’s children illegitimate heirs to the Iron Throne. Jory put up a good fight, but in the end, Jaime Lannister speared his eye through with a sword. Jory deserved better, but hey! Death is better than what happened to Reek. Er, I mean Theon.3. Wight giant (season 8)

The Battle of Winterfell took its toll on some of our favorites (Jorah! Ed! Beric!), but the loss that hurt the most was tiny Lyanna Mormont of Bear Island. She was thirteen years old and talked to grown men as if they were children. She was also defiant as hell and feared nothing. Would she make a better ruler than half the contenders for the throne? Probably, but that’s an argument for another day.

In true Lyanna fashion, she stormed into the battle and took down a giant wight, all by herself. Nearly crushed, she used her last dying breath to plunge an arrow into his eye. *Beats chest* RIP TO A REAL ONE.

Ser Meryn Trant was on Arya’s kill list for a long, long time (see #11). Unlucky for him, he just so happened to escort Mace Tyrell to Braavos, where our vengeful queen was waiting. After Arya caught him off guard through disguise, she gouged out both of his eyes and killed him. Winter came for Trant, and it was a doozy.

Alas, poor Oberon Martell. Far and away the worst submission on this list, Oberon’s head was smashed-no, popped-by The Mountain in Tyrion’s trial by combat. Not only did it ruin beloved childhood snack Gushers for life, but it’s the most violent death of the whole show, period.

The image of The Mountain’s thumbs in Oberon’s eye sockets haunts me to this day. Here’s to hoping the remaining characters (PLEASE! SPARE! GENDRY!) don’t sustain fatal eye trauma in the finale.

Advocating to MACs on behalf of your patients

What is happening with LipiFlow reimbursement? 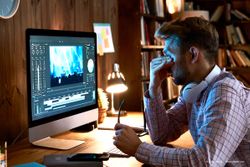