The rate of postoperative cystoid macular edema was lower in a recent study of nearly 1,000 cataract surgery patients at two sites using intravitreal transzonular antibiotic and steroid prophylaxis than in previous studies with topical administration.

In addition, there was no difference in CME incidence between the two intravitreal formulations used in the study, conducted by two private practice surgeons in different states.

However, there was a slight increase in the incidence of CME among patients with known risk factors.

The overall incidence of CME with intravitreal injection of either formulation used in the Dropless therapy was 1.2%, lower than in previous studies of topical administration, said Jeffrey Liegner, MD, co-author of the study.

Dr. Liegner and M. Stewart Galloway, MD, Crossville, TN, conducted the randomized, double-masked, prospective study, enrolling a total of 975 patients at the two practices. Patients underwent cataract surgery using intravitreal transzonal injection and were randomly assigned to either Tri-Moxi or Tri-Moxi-Vanc. Optical coherence tomography was performed preoperatively and at weeks 1 and 5 postoperatively. Patients were not given topical NSAIDs preoperatively unless they were in a high-risk category.

In some clinical settings, such as those with a high incidence of methicillin-resistant staphylococcus aureus, doctors might want to include vancomycin in their prophylactic regimen during cataract surgery, Dr. Liegner explained, and data from a study in which it was used intravitreally adds to the literature available for evaluating risk.

In the recent study, the incidence of clinically significant CME (20/30 or worse visual acuity) was 1.2% for the entire study population, and there was no significant difference between the groups who received the two-drug and three-drug combinations (p=0.8), Dr. Liegner said. In addition, 90 patients received Tri-Moxi in one eye and Tri-Moxi-Vanc in the other, but there was no difference in the CME rate between eyes.

“Everybody who developed CME had risk factors, whether it was diabetic retinopathy, epiretinal membrane, or macular degeneration. Nobody with a healthy retina had CME,” Dr. Liegner said.

This article was adapted from Dr. Liegner’s presentation at the 2015 meeting of the American Society of Cataract and Refractive Surgery. Dr. Liegner is an investor and a consultant in Imprimis Pharmaceuticals. 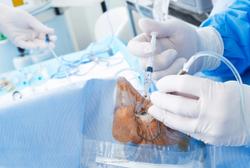