Topography technology is evolving to include smaller and portable smartphone-based options.

This article was reviewed by Stephen D. Klyce, PhD, FARVO

Corneal topography can be measured using a number of different devices, the most frequently used of which is a circular Placido device.

The Placido devices also have undergone a modification of the circular device to one that provides a grid pattern, e.g., the Cassini topographer (i-Optics) and the iDesign (Johnson & Johnson Vision) that eliminate some possible errors that can occur during corneal curvature reconstruction.

The Cassini topographer also uses the second Purkinje image reflected from the posterior corneal surface, from which an estimate of the posterior corneal astigmatism can be obtained, according to Stephen D. Klyce, PhD, adjunct professor of ophthalmology, Icahn School of Medicine at Mount Sinai, NY.

Optical coherence tomography (OCT) is a future option for measuring the corneal tomography. Swept-source OCT is an evolving technology for the measurement of epithelial and corneal thickness as well as anterior and posterior surface curvatures of the cornea.

Slit-scan devices, the Scheimpflug instruments, also have become a corneal tomography standard for measuring pachymetry as well as anterior and posterior corneal curvatures, he noted.

Corneal topographers and tomographers have been evolving to include additional technologies. Two such instruments are the VX120 (Visionix) and the OPD-Scan III (Nidek), which add wavefront aberrometry to Placido topography, plus Scheimpflug tomography in the case of the VX120.

Other Placido topography devices have combined rotating Scheimpflug slits to measure both corneal surfaces along with pachymetry. Examples of these instruments are the Galilei G4 (Ziemer), Sirius (CSO), and TMS-5 (Tomey).

A recent capability that has been added is the ability to measure axial length, as seen in the Aladdin HW3.0 (Topcon), Galilei G6 (Ziemer), and the Pentacam AXL (Oculus); the first two include Placido topography, whereas the latter implements Scheimpflug tomography. The Pentacam offers the ability to measure the axial length and includes wavefront aberrometry as well.

Future of topography
The technology is evolving in a different direction, and what could be considered more practical topographic technologies are in the pipeline. These are smaller, portable, and

These topographers will sit on a slit lamp and send data to the cloud. The Delphi smartphone-based corneal topography system from Intelligent Diagnostics is pending FDA approval.

The Delphi system includes an auto-capture system. After the image is captured and the color-coded map is verified, the image is sent to the cloud server where higher-level calculations are performed for the various types of displays.

All displays are available remotely to the provider using any device with a web browser.

“A major advantage of putting all the data in the cloud is that multiple devices can be placed all over the world and all can send data to the cloud to form a large database of several hundred thousand examinations that in turn can be used for big data analyses for the development-using artificial intelligence-of smarter screening algorithms,” Dr. Klyce noted. 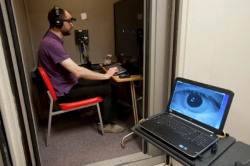 Seeing is believing … and hearing