Salt Lake City-No single cause has yet been found of an ongoing outbreak of toxic anterior segment syndrome (TASS) that began in early spring, although preliminary findings from an ad hoc task force investigating the outbreak have identified several potential etiologic factors. (See "Cause of recent TASS outbreak unknown," Ophthalmology Times, May 15, 2006).

As of late June, it appeared that the outbreak might have begun to abate, said Nick Mamalis, MD, professor of ophthalmology, Intermountain Ocular Research Center, John A. Moran Eye Center, University of Utah, Salt Lake City. Dr. Mamalis oversees the TASS Ad Hoc Task Force, which seeks to determine the cause of the recent series of cases.

"This is an ongoing investigation, and as we receive more information and more data on these patients, we will certainly disseminate it to the ophthalmic community in as efficient a manner as possible," Dr. Mamalis said. 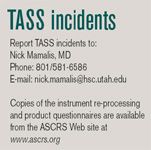 "As we receive more information from the centers that are experiencing TASS and we're able to analyze these, [we hope] we'll be able to come up with more specific recommendations on how to address this problem and how to prevent it from happening," he added. (See separate story, "Surgeon incorporates slit lamp exam as part of TASS protocol.")

The task force issued its recent update to let surgeons and surgical centers know which products and processes have come up in more than one report and that are therefore being looked at more carefully, Dr. Mamalis said. The report lists six preliminary findings from the product questionnaire and four from the instrument re-processing questionnaire.

Items listed from the product questionnaire include the preoperative use of non-steroidal anti-inflammatory drugs (NSAIDs); use of intracameral anesthetics; addition of preserved epinephrine to balanced salt solution; improper dosing, mixing, or injection of intracameral antibiotics; residue accumulation on reusable cannulas; and IOL use in cases associated with TASS.

"I want to make it very clear that we are not implicating a particular product or implant," Dr. Mamalis said. "That certainly is not our intent as a task force. We're just stating that these are potential sources that have arisen when we reviewed the data."

The use of preoperative NSAIDs was listed in the report because several centers said that they had begun to use them just before noticing an increased incidence of TASS.

"Whether this is an important issue or not, it's just one of the many factors that we're looking at," Dr. Mamalis said.

The increasing use of intracameral anesthetics could be an issue in TASS given the short ultrasound time in the majority of cases and the possibility that ophthalmic viscosurgical devices (OVDs) may lengthen the amount of time that the anesthetic can remain in the anterior chamber.

Henry Edelhauser, PhD, from Emory University, Atlanta, a member of the task force, has done research on this topic.