A collaborative team of researchers with Oregon Health & Science University and Oregon State University are using lipid nanoparticles to target light-sensitive cells in the eye. 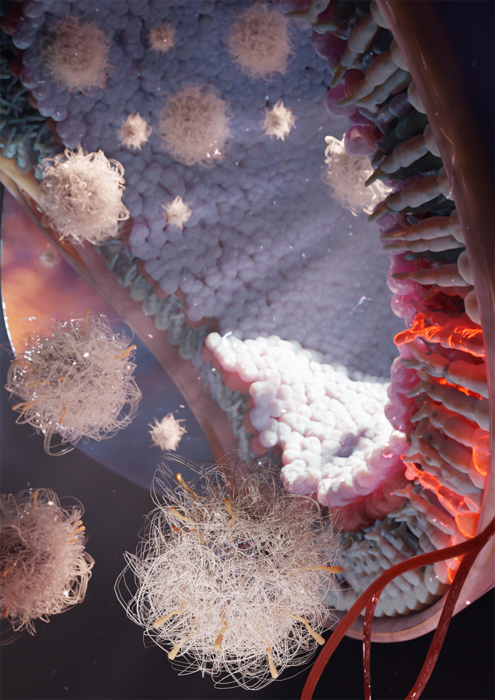 Oregon Health & Science University and Oregon State University researchers are developing a new approach to deliver gene therapy to address blindness-causing genetic mutations. Their new method encases gene-editing molecules inside a shell of lipid nanoparticles. This scientific illustration shows the approach's lipid nanoparticle shells, which appear as fuzzy beige balls after they have been injected into the eye. (Image courtesy of OHSU/Tetiana Korzun)

According to a Oregon Health and Science University (OHSU) news release collaborative team of researchers with OHSU and Oregon State University (OSU) have developed an approach that uses lipid nanoparticles — tiny, lab-made balls of fat — to deliver strands of messenger ribonucleic acid, or mRNA, inside the eye. To treat blindness, the mRNA will be designed to create proteins that edit vision-harming gene mutations.

In a study published in Science Advances,1 the team demonstrates how its lipid nanoparticle delivery system targets light-sensitive cells in the eye, called photoreceptors, in both mice and nonhuman primates. The system’s nanoparticles are coated with a peptide that the researchers identified as being attracted to photoreceptors.

“Our peptide is like a zip code, and the lipid nanoparticles are similar to an envelope that sends gene therapy in the mail,” the study’s corresponding author, Gaurav Sahay, PhD, associate professor in the OSU College of Pharmacy who also has a joint research appointment at the OHSU Casey Eye Institute said in the news release.“The peptide ensures mRNA is precisely delivered to photoreceptors — cells that we haven’t been able to target with lipid nanoparticles until now.”

Renee Ryals, PhD, an assistant professor of ophthalmology in the OHSU School of Medicine and a scientist at the OHSU Casey Eye Institute, pointed out in the news release that more than 250 genetic mutations have been linked to inherited retinal diseases, but only one has an approved gene therapy.

“Improving the technologies used for gene therapy can provide more treatment options to prevent blindness,” she said in the OHSU release, “Our study’s findings show that lipid nanoparticles could help us do just that.”

In 2017, the FDA approved the first gene therapy to treat an inherited form of blindness. Many patients have experienced improved vision and have been spared blindness after receiving the therapy, which is sold under the brand name Luxturna. It uses a modified version of the adeno-associated virus, or AAV, to deliver gene-revising molecules.

Moreover, the OHSU news release pointed out that current gene therapies largely rely on AAV, but have some limitations. The virus is relatively small and can’t physically contain gene-editing machinery for some complex mutations. And AAV-based gene therapy can only deliver DNA, which results in the continual creation of gene-editing molecules that may lead to unintended genetic edits.

Researchers pointed out that the lipid nanoparticles offer a promising alternative because they don’t have size constraints like AAV, and they also can deliver mRNA, which only keeps gene-editing machinery active for a short period of time, so could prevent off-target edits. The potential of lipid nanoparticles was further proved by the success of mRNA-based COVID-19 vaccines, which also use lipid nanoparticles to deliver mRNA. They also were the first vaccines to be authorized for COVID-19 in the United States, thanks to the speed and volume at which they can be manufactured.

In this study, Sahay, Ryals and colleagues demonstrated that a peptide-covered lipid nanoparticle shell can be directed toward photoreceptor cells in the retina, tissue in the back of the eye that enables sight. As a first proof of concept, mRNA with instructions to make green fluorescent protein was placed inside nanoparticles.

The research team noted in the release that after injecting this nanoparticle-based gene therapy model into the eyes of mice and nonhuman primates, the team used a variety of imaging techniques to examine the treated eyes. The animals’ retinal tissue glowed green, illustrating that the lipid nanoparticle shell reached photoreceptors and that the mRNA it delivered successfully entered the retina and created green fluorescent protein. This research marks the first time that lipid nanoparticles are known to have targeted photoreceptors in a nonhuman primate.

According to the OHSU news release, the scientists are currently working on follow-up research to quantify how much of the green fluorescent protein is expressed in animal retinal models. They’re also working to develop a therapy with mRNA that carries the code for gene-editing molecules.

Sahay and Ryals will continue developing their nanoparticle gene therapy delivery system with the support of a new, $3.1-million grant from the National Eye Institute of the National Institutes of Health.