Data from two clinical studies of Leber’s hereditary optic neuropathy (LHON) showed substantial visual improvements in patients with both disease durations of less than six months and between six months and one year. The improvements resulted from a unilateral injection of a gene therapy vector (GS010) and remarkably, the viral vector seemed to be carried over to the untreated eye.

The mechanism of action for these unexpected results need to be clarified with further experimental work.

LHON is the most common cause of mitochondrial blindness with a minimal prevalence of one in 30,000 individuals in the population. It causes blindness mostly in young adult men with a peak age of onset in the third decade of life. It is invariably a bilateral disorder in which the fellow eye becomes affected within three to six months after disease onset in the first eye.

Both eyes are affected simultaneously in about 25% of patients, according to Patrick Yu-Wai-Man, FRCOphth, FRCPath, BMedSci, MBBS, PhD, an academic neuro-ophthalmologist with faculty positions at the University of Cambridge, Moorfields Eye Hospital, and the UCL Institute of Ophthalmology, in the UK.

Three primary mutations within the mitochondrial genome cause about 90% of cases worldwide, namely, m.3460G>A, m.11778G>A and m.14484T>C, with m.11778G>A being the most common mutation by far, accounting for over 70% of those affected with LHON. Unfortunately, most affected patients remain legally blind with vision worse than 1.3 logarithm of the minimum angle of resolution (logMAR) or 3/60 in Snellen equivalent.

Given the poor prognosis, there is an urgent clinical need to identify effective treatments for this blinding optic nerve disease.

Treatment
“Gene therapy is obviously a very attractive treatment option, because the underlying pathophysiology is due to insufficient amount of the wild-type protein,” Dr. Yu-Wai-Man said. “Therefore, if the defective gene is replaced, we should be able to rescue the retinal ganglion cells, preserving function and improving the visual prognosis.”

He described the principles of allotopic gene expression that involves inserting the mitochondrial gene of interest, in this case MTND4, into the nuclear genome with a modified viral vector. The wild-type protein produced has a specific mitochondrial targeting sequence that directs it to be imported into the mitochondrial compartment.

The use of an intravitreal injection is a big advantage for this treatment approach as it is a relatively straightforward procedure that provides direct access to the inner retina. Previous preclinical work indicates that allotopic expression is able to rescue the retinal ganglion cells from the deleterious effects of the m.11778G>A mutation.

Clinical trials
RESCUE and REVERSE are two studies sponsored by GenSight Biologics. The RESCUE study included 39 subjects with the m.11778G>A mutation who have had the disease for 180 days or less. The REVERSE study included 37 subjects who had lost vision for 181 to 365 days. In both studies, one eye was treated with the gene therapy vector (GS010) and the contralateral eye received a sham treatment.

The primary end point of the RESCUE study was the difference between the GS010-treated and sham-treated eyes at 48 weeks, with the hope of finding a difference between the eyes of 15 or more letters on the ETDRS chart. Other parameters of visual function were assessed, including optical coherence tomography imaging and patient-reported quality-of-life measures.

Among the 39 patients (31 men) included in the RESCUE study, vision was lost for an average of 4 months and the average best-corrected visual acuity (BCVA) just before treatment was 1.29 logMAR. During the first 48 weeks, vision continued to decrease in both eyes of each patient to reach a nadir. The primary end point was not met.

“Interestingly and unexpectedly, vision started to improve bilaterally from week 48 to week 96 in both the GS010- treated and sham-treated eyes,” Dr. Yu-Wai-Man said. “In fact, at week 48, vision had already begun recovering from the nadir.” By week 96, vision in the GS010-treated eyes improved by a mean of 26.3 letters from the nadir while in the sham eyes, vision improved by 22.8 letters.

A responder analysis was conducted, defined as an improvement of 10 or more letters if the patient’s BCVA was on-chart at its lowest point, or the ability to read a minimum of five letters or more if the VA was off-chart at its lowest point. Based on this definition, the responder rate was 63.2% in the RESCUE study. To put this into perspective, the responder rate was 27.9% in a retrospective natural history study of LHON.

Non-human primate study
To help determine the basis for the unexpected bilateral response, a study with non-human primates was undertaken to evaluate the biodistribution of the GS010 gene therapy vector. A unilateral injection of GS010 was administered in Cynomolgus monkeys. A  quantitative polymerase chain reaction (qPCR) assay was performed at three months to detect and quantify the viral vector DNA in various parts of the eye and brain.

Three animals were treated with an injection of GS010 in the right eye and one control animal received a placebo intravitreal injection in the right eye. In the treated animals, viral vector DNA was detected in all ocular tissues, but not in the tears of the injected eyes. In the fellow uninjected eyes, vector DNA was found in the anterior segment, optic nerve, retina, optic chiasm, optic tract, and the lateral geniculate nucleus, but not in the visual cortex.

There was, therefore, evidence pointing towards the transfer of the viral vector from the injected to the contralateral uninjected eyes. This observation needs to be confirmed and it remains to be determined whether there is a diffusion pathway via the optic chiasm. The possible transfer of the viral vector between eyes provides a plausible explanation for the unexpected bilateral improvement seen in both the RESCUE and REVERSE studies.

According to Dr. Yu-Wai-Man, the data from the GenSight trials showed a continuous bilateral improvement in BCVA from week 48 to week 96.

“This improvement in BCVA was significant: GS010-treated eyes had a 26-letter average increase compared with the nadir in RESCUE and a 28-letter increase in REVERSE,” he concluded. “More than two-thirds of the combined number of participants in the RESCUE and REVERSE studies experienced a clinically relevant recovery from the lowest level of BCVA compared with 28% of patients in a retrospective natural history study.” 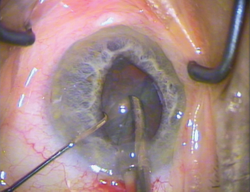 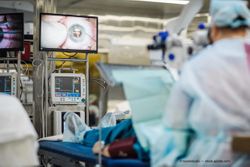 OCT artifacts and pitfalls: In the eye of the beholder