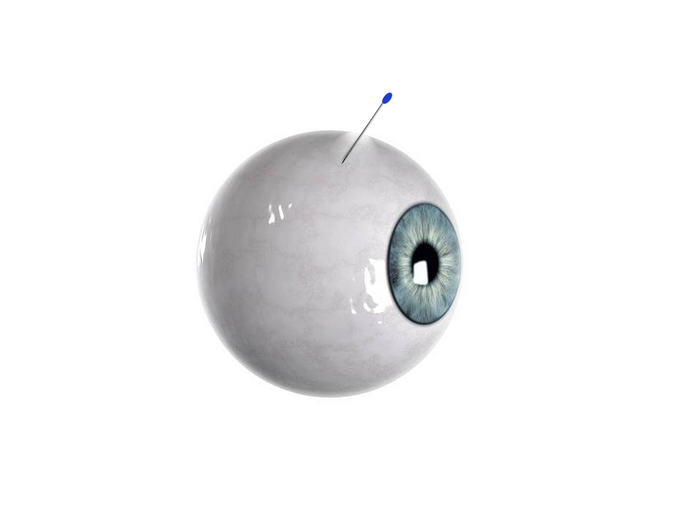 A team of investigators, including scientists from the Terasaki Institute for Biomedical Innovation (TIBI), has developed a novel, self-plugging microneedle for injecting therapeutics into the eyes, potentially solving one of the major challenges of treating eye diseases – accurate delivery of therapeutic drugs to the retina, while guarding against possible complications at the injection site.

According to the institute, in a recent study,1 investigators found preclinical evidence that this innovative, biodegradable microneedle, dip-coated with a therapeutic drug for release upon insertion into the eyeball, can also be equipped with a special hydrogel that simultaneously seals off the insertion hole. Additionally, this self-plugging microneedle can be fabricated with different needle lengths, so therapeutics can be precisely targeted and dispersed to retinal tissues or other areas within the eyeball.

“This novel improvement in drug delivery treatment can avoid problems associated with using needles to treat serious eye diseases,” Ali Khademhosseini, PhD, TIBI’s director and CEO and a co-author of the study, said in a news release from TIBI. “It is one of many simple, yet effective and impactful innovations from our institute, which is focused on translating biomedical engineering into clinical realities.”

The challenge – and need – for retinal drug delivery

The retina is a thin layer of cells that make up the inner lining of the very back of the eyeball. It enables vision by receiving light and converting it to signals that travel to the brain, which then interprets them as images.

As vital as it is to clear, crisp vision, the retina and its critical central portion, the macula, are also subject to different types of damage due to age, genetics, disease and other risk factors. This damage can cause symptoms ranging from distorted or seriously impaired vision to complete blindness and can be widespread among different populations. Indeed, age-related macular degeneration is the leading cause of irreversible vision loss in adults aged over 60, and diabetic retinopathy is the leading cause of blindness among U.S. working-aged adults aged 20 to 74 years.

According to TIBI, some forms of retinopathy can be treated by the injection of drugs into the eyeball using syringes and hypodermic needles. In this procedure, the injected drugs diffuse through the fluid within the eyeball to reach the damaged site. In many cases, multiple injections are needed over a prolonged period of time in order to protect their vision. In addition to this regimen being a hardship on patients, it introduces the risk of bacterial infection at the needle withdrawal site. It can also pose a risk for floating tumor cells in diseased eyes to escape through the puncture holes and migrate to other sites.

TIBI noted in its news release that in order to avoid these hurdles, implantable needles have been attempted for drug delivery. However, mechanical difficulties and navigation through the viscous fluid in the eyeball have hampered accurate needle placement and pose an additional risk of retinal damage. Other approaches involve polymer plugs to close the holes left by hypodermal needles, but this involves a separate step and time lag after injection.

According to TIBI, different types of microneedles, both in singular or patch form, have proven effective for drug delivery into different regions of the eye, with minimal puncture size and optimally targeted drug delivery. A collaborative team, including scientists from the Terasaki Institute for Biomedical Innovation, has built upon this technology by developing a novel, self-plugging microneedle for advanced injection treatment of the eyes.

The TIBI team utilized a precision fabrication method to create biodegradable, sharply-tipped, ultrathin microneedles of various lengths. This versatility in needle length allowed for a more controllable placement into the eyeball and more accurate drug delivery to the injury site; the fineness of the needles minimize incision size in the eyeball. The sharp end of the needle could be dip-coated with the therapeutic drug, with the needle releasing the drug upon insertion into the eyeball.

As an innovative addition, the blunt end of the microneedle was affixed with an experimentally-optimized hydrogel plug, which could swell after needle injection and seal off the insertion hole.

The 2 microneedle coatings were examined microscopically and tested for strength before subjecting them to validation tests for drug delivery and sealing effectiveness. Initial in vitrotests using the drug-loaded microneedles demonstrated almost complete drug delivery over a 24 hour period; similar experiments using dye-loaded SPNs inserted into vials of pig eyeball fluid demonstrated dye release over a suitable distance for injection into the eyeball.

Ex vivo experiments measuring the internal pressure of cultured pig eyeballs showed that there was almost no change in pressure after applications of SPNs, unlike the pressure drop obtained when non-plugging microneedles were applied. Examination of the tissue at the SPN application site confirmed firm attachment of the SPNs.

Further ex vivo experiments measured dye-tracked release from the SPNs into cultured rabbit and pig eyeballs. Tissue sections from these eyeballs revealed that dye distribution distance from the insertion site was directly proportional to needle length, demonstrating the spatially controllable drug delivery capabilities of the SPNs.

Final tests were conducted in vivo on pig animal models. Seven days after application of dye-loaded SPNs to the pigs’ eyes, observation through the pigs’ corneas revealed that the SPNs were still firmly implanted and there was no needle deformation. Leakage tests using surgical sponges showed no leakage of eyeball fluid.

TIBI noted in the news release that tissue section staining of the eyeballs exhibited complete dye dispersal and deep penetration into retinal tissues. Notably, there were no signs of inflammation or tissue disruption at the application site.

This work was supported in part by a grant by the National Research Foundation of Korea (NRF), a grant funded by the Korean government (MSIT) (2021R1F1A105502211), and the Basic Science Research Program through the NRF, funded by the Ministry of Education (NRF-2017R1A6A3A04004741.