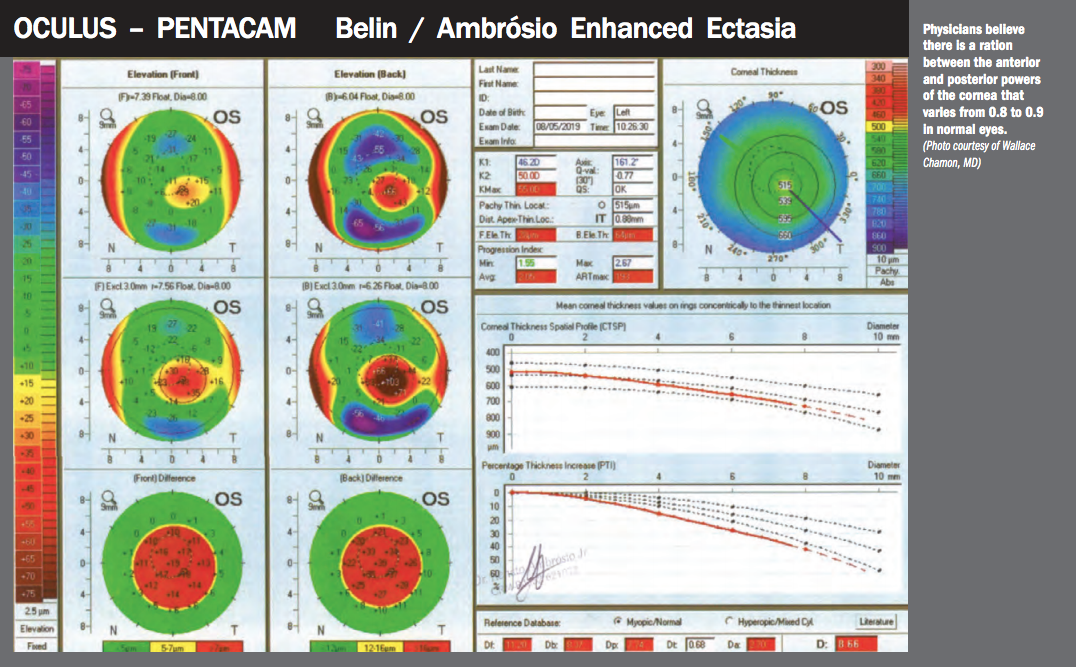 The posterior corneal curvature has a greater effect on the total corneal power in keratoconus eyes than previously realized.

This article was reviewed by Wallace Chamon, MD

A ratio is believed to exist between the anterior and posterior powers of the cornea that varies from 0.8 to 0.9 in normal eyes. In keratoconus, a progressive eye disease, the normally round cornea thins and begins to bulge into a cone-like shape. The cone shape of the cornea deflects light as it enters the eye on its way to the retina, causing distorted vision in patients.

However, in order to calculate the ratio in the refractive indices, some presumptions must come into play, namely, that the factor between the two surfaces is a constant factor in all kinds of eyes, regardless of whether they are normal or not and the cornea has a constant thickness, said Dr. Chamon, adjunct professor of ophthalmology, Department of Ophthalmology and Visual Sciences, Paulista School of Medicine, Federal University of SÃ£o Paulo, SÃ£o Paulo, Brazil, and volunteer clinical faculty, Department of Ophthalmology and Visual Sciences, University of Illinois at Chicago.

“With these assumptions, there is good accuracy in determining the total corneal power by measuring only the anterior surface of the cornea,” he said.

While that last statement has been a consistently held belief, Dr. Chamon and his colleagues challenged both presumptions. He was joined in his research by Rafael Kobayashi, MD, Felipe M. C. Taguchi, MD, and Ibraim V. Vieira, MD.

Regarding keratoconic eyes, Dr. Chamon pointed out that the progression of thinning of the cornea differs from that in normal eyes and that progression is more aggressive toward the apex or the thinnest part of the cone.

According to Dr. Chamon, when comparing maps of thinning progression, ophthalmologists can see clearly that a keratoconic eye does not follow the progression of thinning in normal eyes.

“In a normal cornea, the ratio between the anterior and posterior surfaces can be very predictable,” he explained. “However, if we assume that the keratoconus begins with the thinning of the cornea and leads to progression to a steeper cornea, we have to assume that the ratio has changed because with corneal thinning, the posterior curvature will increase.”

Pointing to examples
As an example, Dr. Chamon demonstrated that in a normal eye based on Gullstrand’s theory, the anterior surface has 7.7 mm of curvature, leading to 43.05 D using the refractive index of 1.3315. The posterior cornea would have 6.8 mm of curvature.

In contrast, in a keratoconic eye with an anterior surface curvature of 7.7 mm, the posterior curvature would be even steeper at 6.00 mm. In the normal eye, the ratio would be 0.883 compared with 0.857 in the keratoconic eye.

“This means that in keratoconus, the posterior corneal surface theoretically has a much higher effect than it does in normal eyes,” Dr. Chamon said.

To determine if their theory was correct, Dr. Chamon and colleagues analyzed every patient who underwent a Scheimpflug examination using the Pentacam in three Brazilian institutions from October 2012 through January 2019.

After duplicate examinations of the same eyes were excluded, ultimately 33,658 examinations were unique. Of those, the examinations that were considered unreliable, abnormal, or performed after a corneal surgery were removed.

The final number of unique examinations was 24,060. Of these, 16,192 were normal, and 7,868 were keratoconic. The Pentacam provided nine classifications of the keratoconic eyes from normal to grade 4.

As the keratoconic grades increased, the ratios ranged from 0.82 down to 0.79 in grades 3 to 4 as expected, and 0.80 in grade 4 likely because of the small number of patients, he noted.

Conclusion
Dr. Chamon concluded that the anterior:posterior ratio has been well determined for normal corneas.

“Keratoconic corneas present a different anterior-posterior ratio with a greater effect of the posterior interface,” he said. “The more advanced the keratoconus, the greater the influence is. Formulas that estimate the total corneal power and, therefore, astigmatism, should not be used in eyes with keratoconus.”

Wallace Chamon, MD
E: VISUS@pobox.com
This article is based on Dr. Chamon's presentation at the American Academy of Ophthalmology 2019 annual meeting. Dr. Chamon disclosed holding patents related to crosslinking, wavefront systemes, and biomechanics - none of which are related to the subject of this report.