A multicenter clinical trial was launched in August 2003 and is under way at five centers. Twenty-three eyes have been operated on so far. The surgery was unsuccessful in three of the earliest cases due to human error and not because of any problems with the laser or surgical technique. In two eyes, perforation occurred as the ablation was performed too anteriorly and the procedure was converted to trabeculectomy, and the surgery was aborted in the third case that was found to be a poor candidate because of a narrow angle.

That hypothesis prompted a change in the surgical protocol, which so far has been successful in both mitigating the postoperative inflammatory response and prolonging the durability of IOP control, reported Dr. Assia.

"In these early cases, CO2 laser-assisted NPDS consistently showed itself to be a simple and safe procedure. If it maintains those benefits in further study and proves its efficacy, this technique could play a role as a viable alternative to lifelong medical therapy," Dr. Assia said.

"As an extraocular procedure, conventional (manual) NPDS has the advantage of a lower complication rate compared with trabeculectomy. However, it is technically demanding, and in 30% or more of attempts, it is associated with perforation of trabeculo-Descemet's membrane," Dr. Assia said. 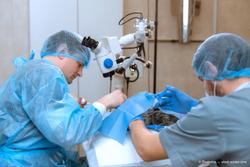 The use of MIGS trends and patterns in the US