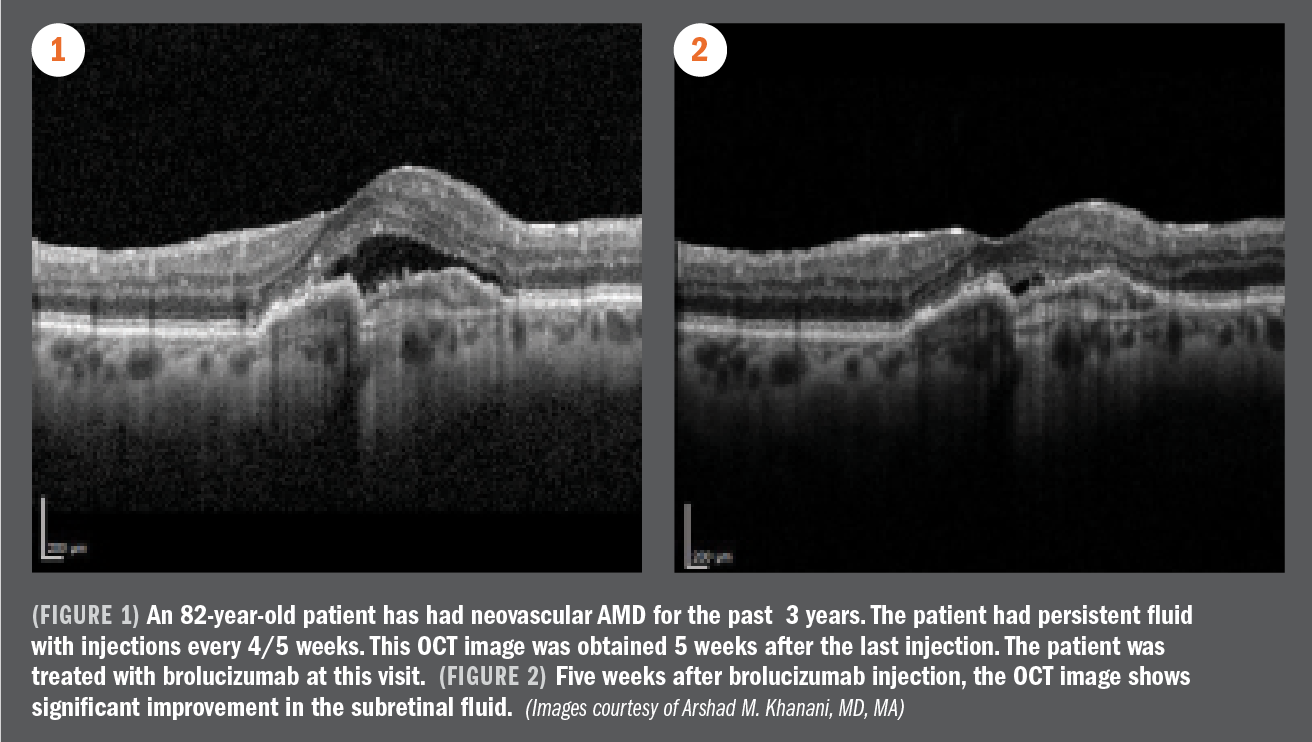 Retinal specialists are ushering in the year 2020 with the availability of a new anti–vascular endothelial growth factor (VEGF) therapy, since the FDA approval of brolucizumab (Beovu, Novartis) for the treatment of patients with wet age-related macular degeneration (AMD) in the last quarter of 2019.

“[Brolucizumab] is a welcome treatment for patients, and it is the first new treatment for wet AMD in about eight years,” according to Joshua Mali, MD, vitreoretinal surgeon, private practice in Sarasota, FL.

“There has been a meticulous process to create a drug that provides advantages over currently available therapies for wet AMD,” Dr. Mali added. “[Brolucizumab] maintains robust visual gains and provides superior retinal drying compared with aflibercept with the potential for 12-week dosing intervals.”

As background, the FDA approval was based on the results of the phase III HAWK and HARRIER 2-year clinical trials that placed brolucizumab head-to-head with aflibercept (Eylea, Regeneron Pharmaceuticals).

The key finding was that in both study arms at 48 weeks and two years brolucizumab achieved its primary endpoint and was found to be noninferior to aflibercept regarding the best-corrected visual acuity [BCVA].

Other relevant findings, Dr. Mali pointed out, were that the visual gains achieved with brolucizumab were noninferior to those achieved with aflibercept at the two time points with longer treatment intervals in most patients; about 56% of patients in the HAWK trial and 51% in the HARRIER being treated with brolucizumab were maintained on three-month dosing during the first year.

In addition, the central retinal thickness in patients receiving brolucizumab in both study arms decreased more compared with aflibercept at both week 16 and years one and two, he noted.

“Retinal fluid is a critical indicator of disease activity in patients with wet AMD and how they are responding to treatment,” he said. “The presence of fluid is also an extremely important factor in the determination of BCVA.”

Safety profiles of the two drugs were similar. A difference was seen in inflammation between brolucizumab and aflibercept, 4% and 1%, respectively.

Impact in clinical practice
Brolucizumab is a single-chain antibody fragment and is a smaller molecule compared with other anti-vascular endothelial growth factor (VEGF) formulations that are currently available, according to Arshad M. Khanani, MD, MA, clinical associate professor, University of Nevada, Reno School of Medicine.

For Dr. Khanani, perhaps the greatest impact brolucizumab will have for both patients and physicians is a substantially reduced treatment burden.

“Patients with neovascular AMD require treatment anywhere from every four to eight weeks,” he said. “When considering the real-world outcomes, the gains in vision are minimal, about eight to 12 letters, compared with the results in the clinical trials. This speaks to the unmet need for durable agents that last longer to decrease the treatment burden.”

Another factor, he noted, is many patients still have active disease despite  monthly injections. These patients have persistent fluid and a high need for anti-VEGF therapy. Two weeks after an injection the retina is dry, but by four weeks, the fluid returns.

“Having a more potent drug to control the disease in a patient with a higher VEGF load is a big advantage,” he said.

Patients receive three loading doses of the drug followed by two doses at 8 or 12 weeks based on the HAWK and HARRIER trials.

“Even if a patient had been previously treated for AMD, they can be treated according to this schedule, but they may not need the loading doses if the retina is dry after one injection,” Dr. Khanani said.

Dr. Khanani has not seen any significant adverse events in patients that he has treated so far in the brolucizumab clinical trials or in his clinic after approval. He is, however, aware of higher rates of inflammation in the brolucizumab-treated patients in the HAWK and HARRIER studies.

“As with any new drug, we need to watch for any adverse events that can develop in patients who are receiving treatment,” he said.

Patients are encouraged about the increased time between treatments, thus lessening the burden on them and their families, he noted.

“We have not had a new drug for these patients since 2011 when aflibercept was approved. It is exciting for our patients and for physicians to have this new drug that is more durable than the available drugs and achieves better drying of the central retina and better control,” Dr. Khanani concluded.