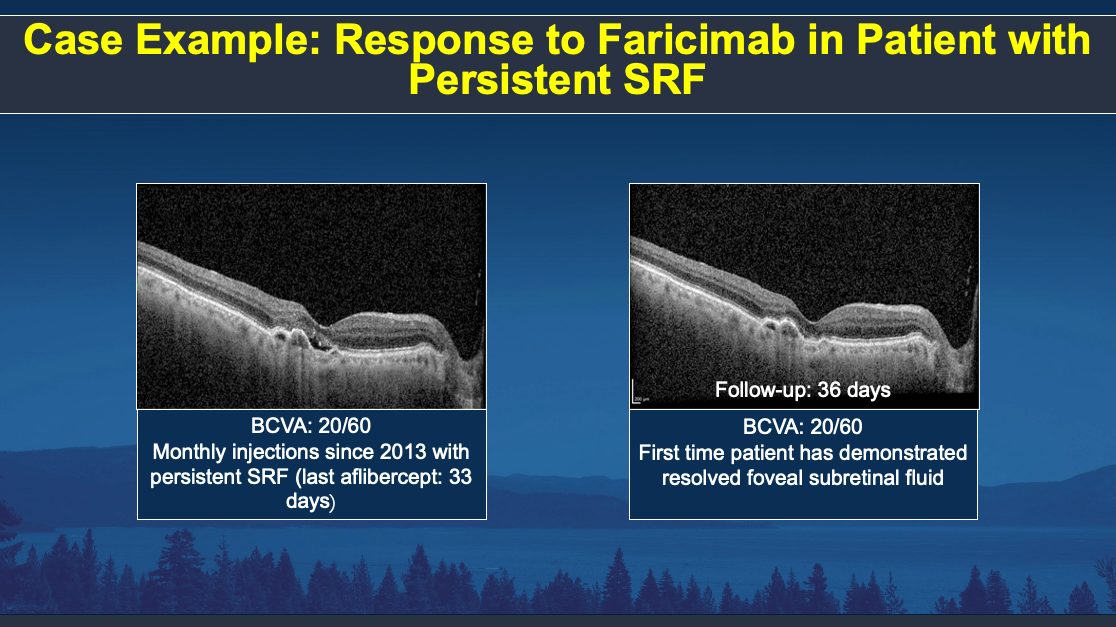 Danzig presented the data this week at the American Society of Retina Specialists 2022 annual meeting at the Jacob K. Javits Convention Center in New York.

This is encouraging because the ongoing TRUCKEE study population is comprised of treatment-naïve patients, but mostly those who require frequent injections to address persistent disease activity associated with neovascular AMD.

The investigators analyzed the patient demographic data, the previous treatment history, efficacy, and safety of patients treatment with faricimab who had in most cases been treated with another drug for neovascular AMD.

The patients in the study were about a mean of 80 years of age and had been treated previously with aflibercept (Eylea, Regeneron Pharmaceuticals) in more than half of cases, followed by ranibizumab (Lucentis, Genentech), and brolucizumab (Beovu, Novartis). About 6.6% were treatment naïve. In most cases aflibercept was the last previous treatment.

The results showed that patients, at their first followup appointment, achieved a mean increase in the VA of about +0.5 letters and a mean decrease in the CST of about 32 μm. The height of the PED decreased by about 14 μm, on average.

Importantly, faricimab exhibited a good safety profile. The investigators found that, thus far in the investigation, no safety signals were identified in the patients treated with faricimab.

Danzig described a representative case of a treatment-naïve patient with retinal pigment epithelial disruption, intraretinal and subretinal fluid, a PED, and an epiretinal membrane (ERM) at baseline. The best-corrected VA (BCVA) was 20/200. Follow-up at 33 days after being treated with faricimab showed marked improvement in the anatomic parameters with macular atrophy and the ERM. The BCVA was 20/100.

Danzig also described a representative case of a patient treated with faricimab. The initial patient data showed a best-corrected VA (BCVA) of 20/150 and a CST of 468 μm; the patient had been treated previously with aflibercept. By 33 days after treatment with faricimab, the BCVA was 20/70 and the CST was 398 μm.

The investigators showed that the subretinal and intraretinal fluid decreased in patients over the course of treatment with faricimab.

The conclusions reached based on these results were that the BCVA improved slightly in patients in whom the retinal fluid persisted despite previous treatment. In addition, no safety signals have been observed. The TRUCKEE study is ongoing and data will continue to be collected.

“So many of us are extremely excited about the prospect of using Vabysmo in our practices," Danzig concluded. "For our patients who need frequent injections, clearly, there is an unmet need for this patient population, and it is encouraging to see improved efficacy in the TRUCKEE data, and improved durability in the clinical trials, without compromising safety. Furthermore, we are hopeful that treatment-naïve patients will see comparable improvements in the real-world as were seen in the clinical trials, along with improved durability for all patients.”

Danzig has no financial disclosures related to this content.