As Rho kinase (ROCK) inhibitors, netarsudil 0.02% — known as Rhopressa® in the U.S. — and ripasudil 0.4% — known as Rhokiinsa® in the EU — are intended to treat open-angle glaucoma (OAG) and elevated intraocular pressure (IOP), according to a company news release.

The clinical trial included a single-masked comparison of netarsudil 0.02% dosed once daily versus ripasudil 0.4% dosed twice daily in 245 participants for four weeks.

Trial results revealed that netarsudil 0.02% once daily was superior to ripasudil 0.4% daily in lowering at week 4 (p<0.0001), the primary endpoint for the study, the company reported.

Aerie reported that both medications were well-tolerated, with the most common treatment emergent adverse event being conjunctival hyperemia (54.9% of subjects with netarsudil 0.02%; 62.6% of subjects with ripasudil 0.4%).

The trial was conducted in alignment with Japan’s Medical Devices Agency (PMDA) in anticipation of a potential regulatory submission of netarsudil 0.02% in Japan.

We believe that the statistically superior IOP-lowering of netarsudil versus the comparator in our study may suggest a very bright future for our product in Japan, a market where the comparator product is the only rho-kinase inhibitor commercially available,” said Benjamin F. McGraw, III, PharmD, Aerie’s interim executive chairman. “The IOP-lowering with netarsudil was consistent with that seen in the previous Phase 2 study conducted in Japan as well as in our ROCKET and MERCURY studies conducted in the United States for Rhopressa® and Rocklatan®, respectively.” 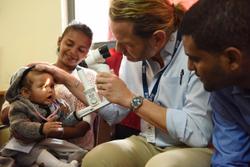