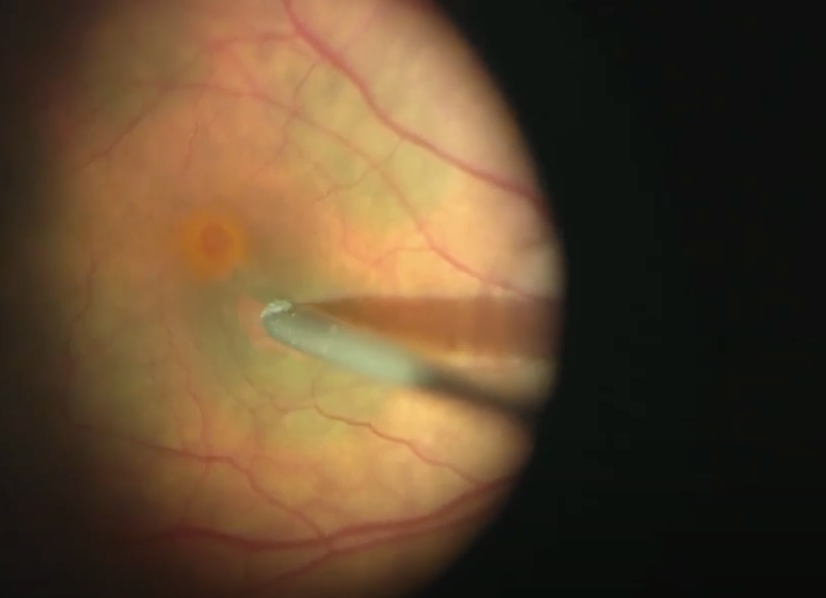 Dr. Awh designed the device, which can be used to create a membrane edge, secure the membrane, peel it from the retina, and remove it without removing the instrument from the eye; fluid-air exchange can also be performed when needed.

With all of these capabilities, the number of instrument exchanges decreases, its use may eliminate the need for forceps and scrapers, and it may even cause less trauma to the macula. The device is available with 23-, 25- and 27-gauge shafts.

“The MVP is a multi-function device with active aspiration controlled by a foot pedal, using the active extrusion function of a vitrectomy machine,” said Dr. Awh, who is in private practice at Tennessee Retina in Nashville, TN.

At the distal end of the MVP is smooth primary spatula that is designed to lift membranes but not shred them. The spatula shields the retina from the vacuum port, which is located much closer to the tip than the port of a vitrectomy cutter.

It is small enough to create vacuum holding force but is sufficiently large enough to allow pieces of membranes to be aspirated out of the eye through the lumen of the MVP.

Two micropicks, one on each side of the tip, can be used to create an edge or flap in the membranes, and importantly, this is done with minimal risk of damaging the underlying retina.

Dr. Awh showed surgical videos of the MVP in cases of epiretinal membrane, macular hole, and traction retinal detachment. He used the MVP to perform the fluid-air exchange in the macular hole case, eliminating the need for a separate extrusion cannula.

Performance
Dr. Awh has used the MVP in more than 100 cases, the majority of which were performed to treat ERMs or macular holes.

In only 10 of the 100 cases, an instrument exchange was needed to wipe a fragment of a membrane that clogged the port of the device. No iatrogenic retinal breaks or other complications were observed.

Based on the device’s performance, Dr. Awh highlighted its advantages.

“I find the MVP to be more stable device and less fatiguing, in that there is no need to activate forceps with my hand,” he said. “The device reduces or eliminates the need to remove and wipe forceps. The teasing action used to peel the membranes may transmit less stress to the macula than when peeling the membranes with forceps.”

An expected disadvantage is the need for the surgeon to learn new techniques with a new device, particularly the use of the micropicks to create the initial membrane flap or edge. Also, the MVP may be less effective for peeling very thick or rigid membranes, he explained.

Carl Awh, MD
E: carlawh@gmail.com​
Dr. Awh is a consultant to and owns stock in Katalyst Surgical. Patents are pending for this device.