A majority of patients with DME across all doses had rapid improvements in vision, and patients in the higher dose cohorts showed a mean gain of 9.5 ETDRS letters in best-corrected visual acuity (BCVA) at 24 weeks following a single injection of UBX1325.

A majority of wet AMD patients treated with UBX1325 showed rapid gains in visual acuity, which were maintained through 12 weeks. In most patients, central subfield thickness (CST) remained stable through the study period.

According to the company, the study enrolled a total of 19 patients with advanced DME (n=8) and wet AMD (n=11) for whom anti-VEGF therapy was no longer considered beneficial. UBX1325 was well-tolerated at all doses tested (through 10 mcg) with no dose-limiting toxicities and no reported incidence of inflammation.

The Phase 1 data show rapid improvements in visual acuity as measured by BCVA in patients with DME, with the majority of patients demonstrating sustained responses through 24 weeks:

“A 10 letter gain in DME patients, maintained through six months, is an impressive outcome, and is particularly noteworthy considering that it was achieved with a single injection,” Arshad Khanani, MD, MA, managing partner of Sierra Eye Associates, said in a statement. “Hard-to-treat patients require as many as 10 injections in the first year of treatment to see full benefits from currently available anti-VEGF therapies. A treatment that reduces the frequency of injections while showing meaningful and sustained improvements in BCVA would be of huge value for patients and physicians.”

The Phase 1 study included 11 wet AMD patients (4 in the SAD cohort, and an additional 7 in an expansion cohort). A majority of patients showed rapid improvements in visual acuity:

“Patients with wet AMD will lose vision without treatment and have a worse prognosis than patients with DME, which is why the letter gain seen in the AMD cohort is so meaningful,” Robert Bhisitkul, MD, PhD, professor of ophthalmology and director of the Retina Fellowship at University of California, San Francisco, said in a statement. “The efficacy that we are seeing in AMD patients provides a convincing rationale for advancing this program into additional clinical studies.”

Anirvan Ghosh, PhD, Unity’s CEO, noted that the study has now followed advanced DME and AMD patients for 24 weeks, and see clear evidence of rapid and sustained responses from a single injection of UBX1325.

“The improvements in vision and retinal structure suggest that this new mechanism of action – the selective elimination of senescent cells in diseased retinal tissue – has the potential for disease-modifying effect in a large proportion of patients struggling to manage their disease,” Ghosh said. 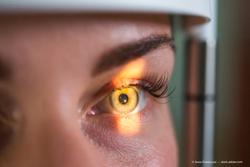 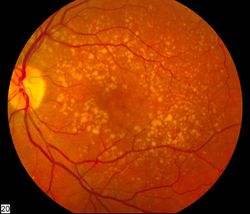