Study: Statins associated with lower risk of development of POAG

Use of statins to control elevated cholesterol levels and prevent cardiovascular events also has another upside, i.e., a concomitant lower risk of development of primary open-angle glaucoma (POAG).

In vitro studies conducted in the 2000s indicated that statins may have the ability to decrease IOP and provide protection for the retinal ganglion cells against damage from glaucoma, according to the authors of a newly published study by Kang et al. in JAMA Ophthalmology.

The association between statin use and POAG has been investigated previously, but the results were inconclusive and contradictory and only relatively short courses of statin use were investigated.

A review of the medical records confirmed the incident cases of POAG. The study data regarding development of glaucoma, assessment of high cholesterol, total serum cholesterol, statin use, and use of other cholesterol-lowering drugs had been collected biennially from the patients.
The main outcomes measures were the multivariable adjusted relative risks (RR) and the 95% confidence intervals (CIs).
Study findings

“Individuals who used statins for 5 or more years were more likely to have reported a history of elevated cholesterol levels, higher total serum cholesterol levels, and a higher prevalence of cardiovascular disease and risk factors. Longer statin use was not associated with known risk factors for glaucoma such as African American race/ethnicity or having a family history of glaucoma,” the investigators said.

An important finding involved the longer use of statin, i.e., patients who used statins for 5 or more years had a 21% lower risk of development of POAG compared with patients who had never used statins (RR, 0.79; CI, 0.65-0.97).

This class of drugs may lower the risk of development of POAG by IOP-lowering and neuroprotective mechanisms.

“Statins affect the activities of myosin II adenosine triphosphatase and p kinase in the trabecular network that increase nitric oxide production and aqueous outflow facility, which may lead to some IOP lowering. Also, greater production of nitric oxide would increase the blood flow to the optic nerve,” the investigators explained. 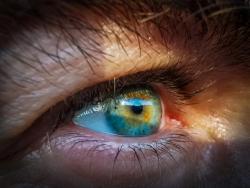