Key is to recognize usual patterns for systemic and topical medications.

This article was reviewed by William F. Mieler, MD

Of the thousands of available medications, relatively few are known to cause retinal complications at therapeutic dosages, according to William F. Mieler, MD.

Patterns of toxicity include disruption of the retinal pigment epithelium, vascular occlusion, macular and retinal edema, crystalline deposition, and inflammation, said Mieler during a presentation at the American Academy of Ophthalmology (AAO) virtual 2020 annual meeting. Mieler is the Cless Family Professor in Ophthalmology at the University of Illinois College of Medicine in Chicago.

“The key factor to not missing any medication-related abnormality is to have a thorough history of the medications that the patient is currently using or has used in the past,” he said. “Then it is imperative to know and to recognize the usual patterns of toxicity that have been described for systemic and topical medications but also to remain alert for new associations involving medications and possible retinal toxicity. Multimodal imaging is very helpful in checking for and documenting possible toxicity as well as in monitoring progression.” 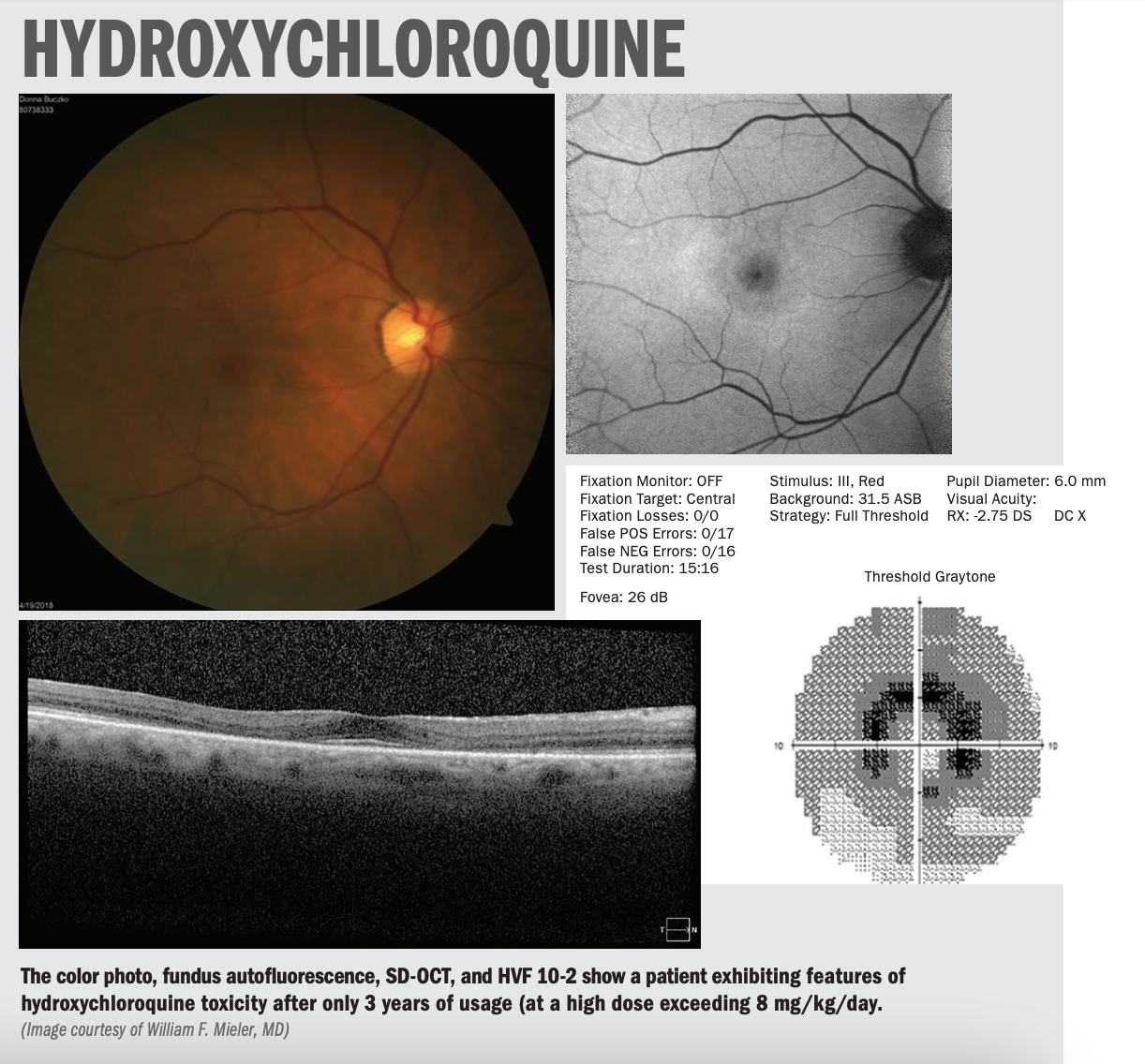 Other than the potential for causing maculopathy and retinopathy, hydroxychloroquine has relatively few systemic adverse effects, Mieler said.

The retinal toxicity associated with these drugs that is seen most often on fundus examination is represented by pigment mottling and/or atrophy, rather than a complete bull’s eye maculopathy.

As demonstrated in a case example presented by Mieler, worsening can occur after the patient has stopped the medication.

“It is important to recognize that hydroxychloroquine and chloroquine bind to melanin and are stored in the eye where they can remain indefinitely,” he said. “Toxicity can progress months and years after cessation of the medication.”

Mieler pointed out that the drugs are cleared by both the liver and kidneys so that patients with renal and/or hepatic impairment are at risk for increased blood levels and retinal toxicity.

“Pre-existing maculopathy and concurrent tamoxifen usage may also increase the risk for retinal toxicity with chloroquine and hydroxychloroquine,” he noted.

Adherence to medication dosing recommendations and monitoring with baseline and follow-up multimodal imaging are key elements for preventing irreversible vision loss from the drug-induced retinal toxicity.

Related: A rift in the retina may help repair the optic nerve

As noted in the most recent AAO-supported recommendations on screening for chloroquine and hydroxychloroquine retinopathy,1 the risk of toxicity is less than 2% at 5 years among patients treated with hydroxychloroquine 5 mg/kg or less, but it increases to greater than 20% at 20 years.

Therefore, it is recommended that the daily dosage of hydroxychloroquine be kept to less than 5.0 mg/kg real weight (< 2.3 mg/kg chloroquine). In addition, the daily dose should not exceed 400 mg and ideally should be just 200 mg.

“Most reports of toxicity have occurred in patients on medication for greater than 7 years or having received a total dose of at least 460 g,” Mieler said. “High dosages hasten the accumulation of drug and may enhance the degree of tissue damage. At a daily dose of 400 mg/day, the 460 g cumulative dose would be reached prior to 5 years, which explains the current recommendation to begin annual screening after 5 years.” 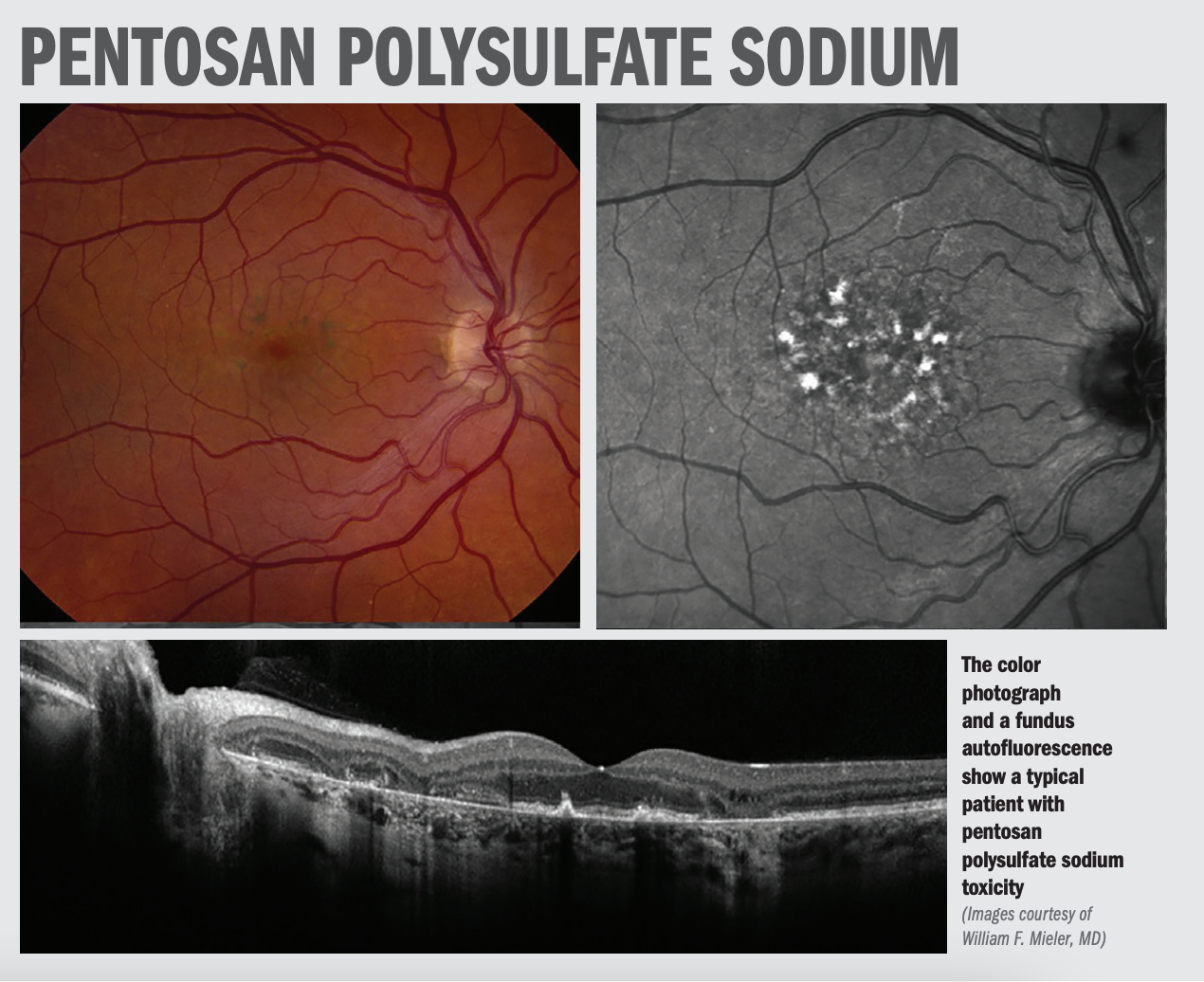 Monitoring patients
Monitoring for retinopathy/maculopathy in patients being treated with hydroxychloroquine/chloroquine aims to detect abnormalities prior to the development of irreversible damage and visual loss.

Annual screenings for drug-related toxicity beginning after 5 years should include automated perimetry (generally a Humphrey 10-2 visual field) and SD OCT as the primary tools.

A combination of results of multiple tests provides the best monitoring because a single screening test, such as SD OCT, may be normal even when a parafoveal ring abnormality might be seen on the visual field, Mieler noted.

“Even subtle changes in the visual field need to be taken seriously. If any abnormalities are seen, SD OCT, fundus autofluorescence, or multifocal electroretinogram should be performed as these tests may be more sensitive than the visual field,” he said.

Mieler added that microperimetry also may be considered, although its role for detecting chloroquine/hydroxychloroquine retinopathy is not fully known. In addition, the test is not uniformly available in all retina specialists’ offices. The utility of OCT angiography is currently being evaluated.

PPS is indicated to treat symptoms of interstitial cystitis, and it is also utilized in the prevention and/or treatment of thrombi and as a disease-modifying drug for osteoarthritis. It was approved for marketing in the United States in 1996.

A preliminary report providing evidence of ocular toxicity associated with its use was published in 2018.2

A more recent paper provided corroborating evidence and reported a prevalence of 20% in a cohort of 50 patients who had been previously treated with or were currently receiving PPS.3

“Available evidence shows treatment with this drug can cause profound central macular pigmentary change, although the long-term impact is still being investigated,” Mieler said.

PPS binds to epithelial cells, including the retinal pigment epithelial cells in the eye. Risk of maculopathy with PPS is related to duration of therapy, daily dose, and total cumulative dose. It generally takes more than 10 years of exposure to the drug to see ocular abnormalities.

Conclusions
Affected patients typically present with central vision impairment and are found on examination to have macular pigment mottling and excrescences on Bruch’s membrane. Anatomic appearance on OCT is generally normal or minimally affected. 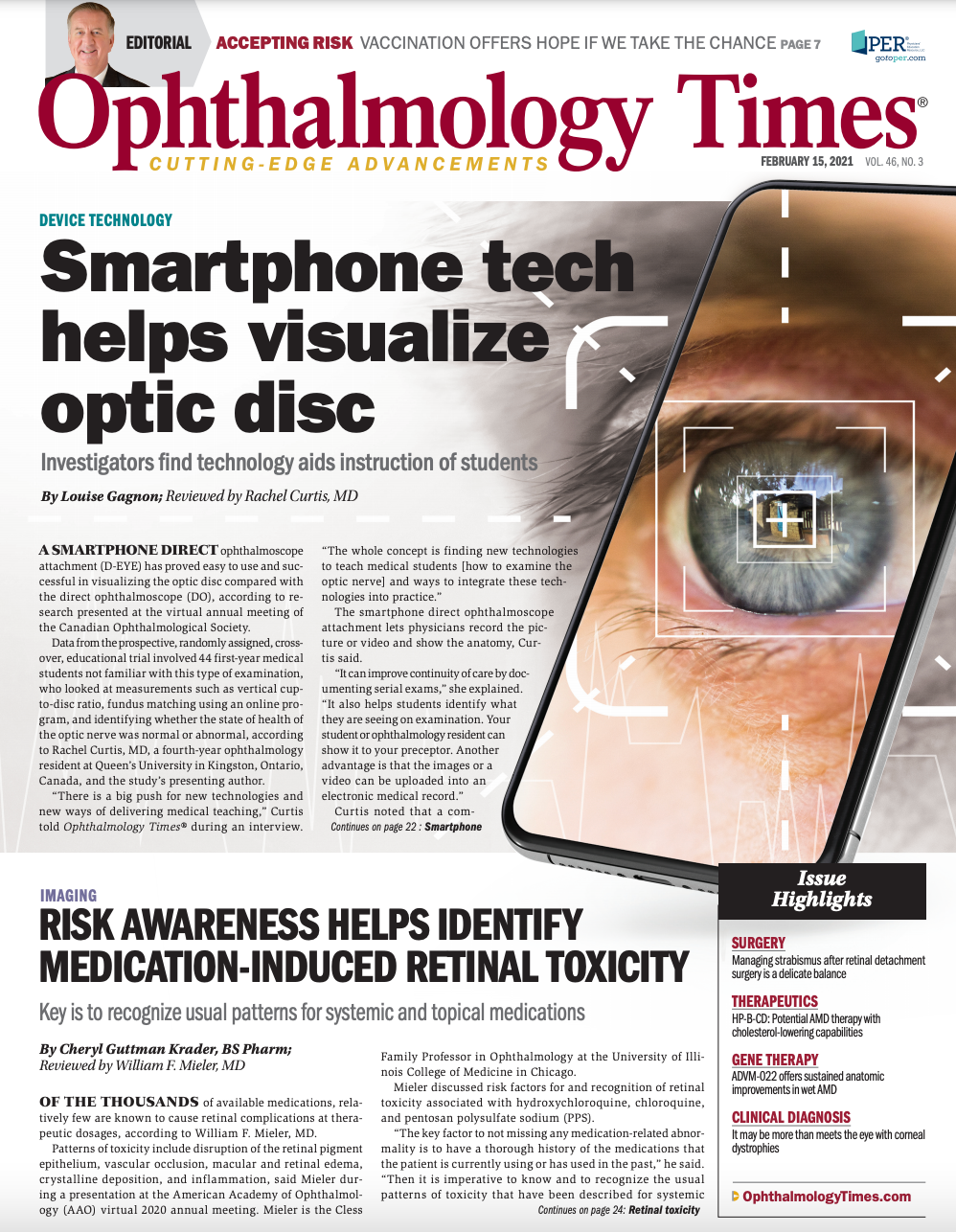