Refractive surgery screening devices do not provide results that are interchangeable.

Refractive surgery screening devices do not provide results that are interchangeable.

Atlanta-Many different technologies are commercially available for use by refractive surgeons to screen potential patients preoperatively.

“Many of these machines provide similar information and assign values to patients who are at increased risk for developing ectasia after refractive surgery,” said Heather Weissman, MD, a resident at Emory Eye Center, Emory University, Atlanta. “There is overlap of some information between machines.”

However, the question that currently remains unanswered is: Are these machines providing similar screening information?

A comparison of Scheimpflug and spectral-domain optical coherence tomography (SD-OCT) values-superior-inferior (S-I) and superonasal-inferotemporal (SN-IT)-that were obtained from possible candidates for refractive surgery with suspect screening parameters showed that the values were poorly correlated and the two screening devices cannot be used interchangeably.

A consecutive series of 182 eyes of 91 patients who were possible surgical candidates underwent a refractive surgical evaluation using Scheimpflug camera and SD-OCT and were found to have suspicious screening parameters with an ectasia risk score of 3. The SD-OCT S-I and SN-IT values that were obtained were correlated individually with the ARTMax score and the SD-OCT values then were averaged and correlated with the ARTMax score using Pearson’s correlation coefficient (r).

The second analysis also showed a poor correlation (r = –0.12) between the technologies when the SD-OCT values were averaged together.

The investigators concluded that the Pentacam HR ARTMax and SD-OCT indices were correlated poorly in patients with suspicious screening parameters. These two screening metrics are not analogous or interchangeable. The study was unable to determine the relative superiority of either device.

“More studies need to be carried out to prove the validity and agreement among refractive surgery screening modalities,” Dr. Weissman said. “Which machine gives us the most valuable information?”

Dr. Weissman and colleagues have no financial interest in the subject matter. 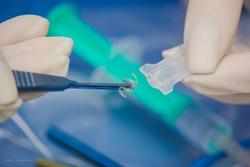