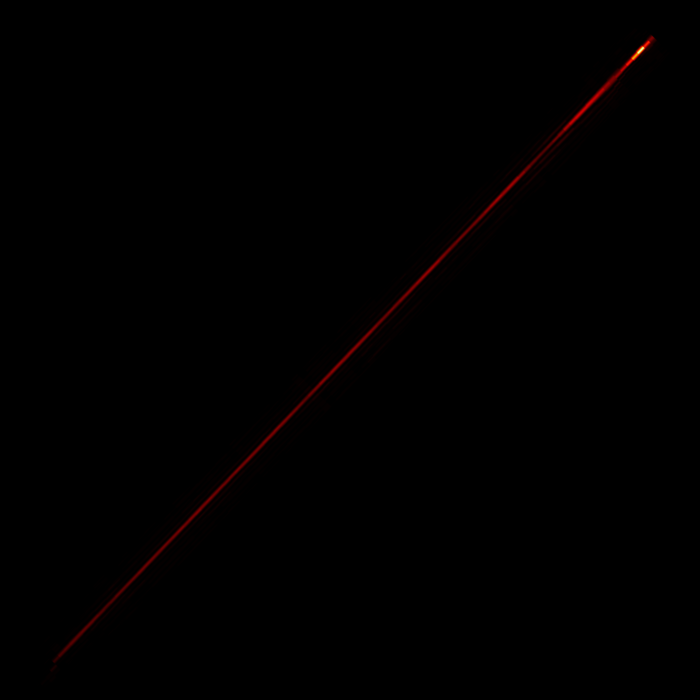 Researchers developed a new method for flexibly creating various needle-shaped laser beams like the one shown here. Because these long, narrow beams feature an extended depth-of-focus, they can be used to improve OCT. (Image courtesy of Jingjing Zhao, PhD. Stanford University School of Medicine)

Investigators have developed a new method for flexibly creating various needle-shaped laser beams that can be used to improve optical coherence tomography (OCT).

“Needle-shaped laser beams can effectively extend the depth-of-focus of an OCT system, improving the lateral resolution, signal-to-noise ratio, contrast and image quality over a long depth range,” said research team leader Adam de la Zerda, PhD, from Stanford University School of Medicine. “However, before now, implementing a specific needle-shaped beam has been difficult due to the lack of a common, flexible generation method.”

According to the study,1 the researchers describe their new platform for creating needle-shaped beams with different lengths and diameters. It can be used to create various types of beams such as one with an extremely long depth of field or one that is smaller than the diffraction-limit of light, for example.

Stanford University noted in a news release that the needle-shaped beams generated with this method could benefit a variety of OCT applications. For example, utilizing a long, narrow beam could allow high-resolution OCT imaging of the retina without any dynamic focusing, making the process faster and thus more comfortable for patients.

“The rapid high-resolution imaging ability of needle-shaped beams can also get rid of adverse effects that occur due to human movements during image acquisition,” said the paper’s first author Jingjing Zhao, PhD. “This can help to pinpoint melanoma and other skin problems using OCT.”

Stanford University noted that as a noninvasive imaging tool, OCT features an axial resolution that is constant along its imaging depth. However, its axial resolution, which is determined by the light source, has a very small depth of focus. To address this issue, OCT instruments are often made so that the focus can be moved along the depth to capture clear images of an entire region of interest. However, this dynamic focusing can make imaging slower and doesn’t work well for applications where the sample isn’t static.

Moreover, OCT typically uses an objective lens that generates one focal point with a single, short depth-of-focus. To increase the depth of focus, the researchers used a diffractive optical element known as a phase mask that uses micro-structures to create various light patterns resulting in numerous focal points along the axial direction. They designed the phase mask with groups of pixels that were randomly distributed and specially patterned to create a new focus different from the original one. The entire phase mask can then be used to generate densely spaced foci in the axial direction, forming a needle-shaped beam with a long depth-of-focus.

According to Zhao, flexibility is the primary advantage of this new approach.

“Both the beam length and its diameter can be flexibly and accurately changed by modifying the locations of the foci and the phase difference between every two adjacent foci,” Zhao said.

This flexibility is possible thanks to a computational model the researchers developed to reveal the relationship between the beam properties and the design parameters of the multiple foci in a precise, quantitative way. They also developed a high-performance fabrication procedure to make diffractive optical elements based on the model’s calculations.

To test their model, the researchers created beam shapes suitable for imaging several different types of samples. For example, to image individual cells within an entire layer of human epidermis, they created a needle-shaped beam with a diameter smaller than 2 μm (cellular resolution) and a length of at least 80 μm. They were also able to capture high-resolution dynamic images of a beating heart in a living drosophila larva, which is an important model organism for studying heart disease. This required a beam that was 700 μm long and 8 μm in diameter to visualize organ structure over a long depth range.

The researchers are now working to improve the approach by replacing the diffractive optical element and objective currently used to make a needle-shaped beam with a single flat metalens based on their model. This metalens could be placed on the skull of a mouse to observe the neuron dynamics inside the mouse brain in real time, for example.

The new work could also find applications beyond improving OCT.

“Needle-shaped beams can be used to improve the resolution of all microscopy systems, including particle manipulation with optical tweezers, materials processing, confocal microscopy, multiphoton microscopy, photolithography and photoacoustic tomography,” Zhao concluded. “Our model can also be applied to electromagnetic waves for terahertz imaging and even the mechanical waves used in ultrasound imaging.”