Investigators find treatment with EPO shows no effect on the development of ROP. 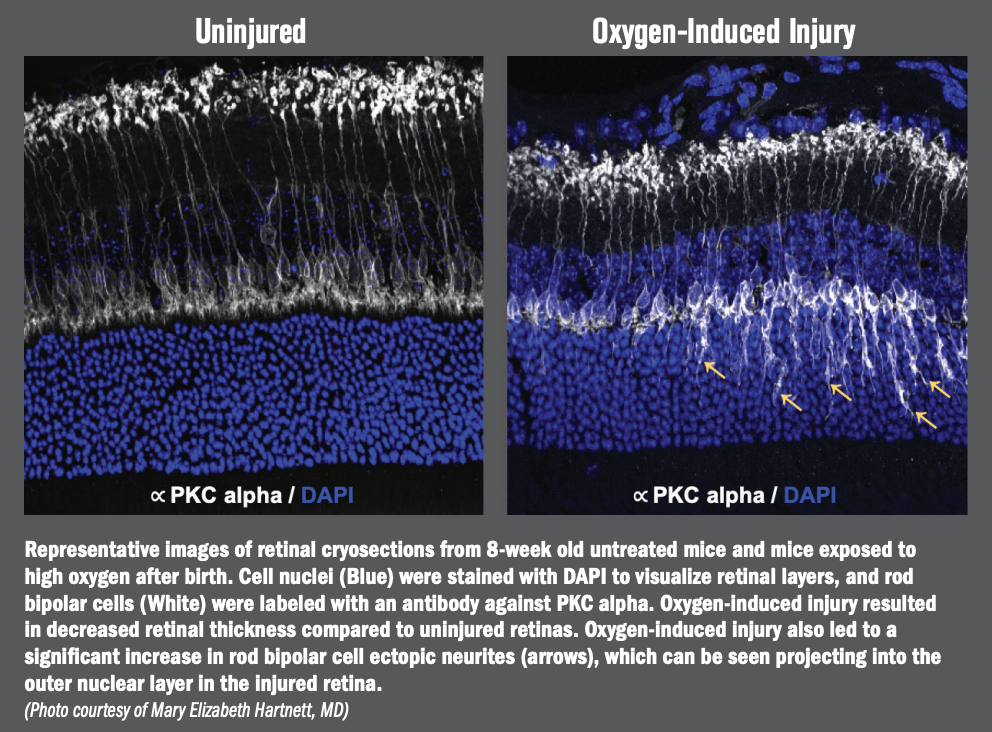 This article was reviewed by Mary Elizabeth Hartnett, MD

Hartnett, the study’s first author, Colin Bretz, PhD, and other colleagues in her laboratory at the John A. Moran Eye Center, University of Utah in Salt Lake City, conducted their research comparing transgenic mice with hypoactive EPOR signaling and their wild type littermates and using a murine model of oxygen-induced retinopathy (OIR).

The results are reported in an article published in the March 2020 issue of the American Journal of Pathology.

“Erythropoietin is well known as a hematopoietic hormone, but there has been growing interest in its potential neural, vascular, and tissue protective effects,” said Hartnett, professor of ophthalmology and visual sciences at the University of Utah.

Hartnett said thecurrent research provides evidence that EPOR signaling may be important in reparative processes following retinal injury such as from vascular loss and remodeling.

Hartnett noted the researchfocused the effects of EPOR signaling on retinal repair after injury rather than testing a role for EPO.

As a first step, the researchers compared retinal structure and function in the transgenic and wild type animals under normal conditions.

These investigations showed that the two groups had similar results in electroretinography testing and visual acuity. Differences were noted in neural retinal structure, however, showing that the transgenic mice had thinner inner and outer plexiform layers as well as a greater number of amacrine cells.

“Our findings of structural differences between the animals with hypoactive EPOR signaling and the controls led us to dig deeper and use the murine OIR model to test our hypothesis that EPOR signaling could be important in retinal neuroprotection,” according to Hartnett.

In the OIR model, mice are placed into a high- oxygen environment that causes loss of retinal vessels and vessel growth into the vitreous.

After several days, the animals are returned to room air, and subsequently the pathology is repaired so that there is regrowth into the retina of lost vessels and disappearance of the vessels in the vitreous.

The OIR experiment showed that after the animals were returned to room air, the transgenic mice with hypoactive EPOR signaling had fewer amacrine cells and reduced numbers of rod bipolar cell ectopic neurites than the wild type controls. The structural differences between the two groups corresponded with the finding that the transgenic mice had reduced b-waves on electroretinography.

“These observations indicate that EPOR signaling is important for the repatterning of retinal neurons that occurs during the repair process after retinovascular loss, which maintains connectivity of rod bipolar cells from the inner nuclear layer to extend directly to the rod photoreceptors in the outer nuclear layer and limit b-wave loss,” said Hartnett.

Work in progress
Hartnett and her colleagues are studying the role of EPOR signaling in vascular development and regulation of angiogenesis modulated by the vascular endothelial growth factor receptor-2.

To understand if EPO treatment in infants at risk for ROP might have neuro- or vasculoprotective effects, they are planning to obtain OCT images from children enrolled in the Preterm Erythropoietin Neuroprotection Trial (PENUT; NCT01378273) at the University of Utah. PENUT randomized premature infants to high-dose EPO or placebo administered from 24 hours after birth through 32 weeks postmenstrual age.

The trial’s main objective was to investigate whether EPO might have a brain neuroprotective effect.

The recently published results of the primary end point analysis, conducted when participants reached 2 years of age found no significant difference between the EPO and placebo groups in the incidence of severe neurodevelopmental impairment.

Treatment with EPO also had no effect on the development of ROP, but the study did not evaluate neural retina.

“The children enrolled in PENUT are now reaching 5 years of age, and we are interested to see if early treatment with EPO may have had an effect on retinal structure,” Hartnett concluded.