Contact lens drug delivery for glaucoma: A better way to get there

At Glaucoma 360, Diopter Corp. CEO Chris Adams discussed a contact lens device that has been found effective for treating glaucoma because it was engineered with vitamin E nano-barriers to extend drug release.

A new platform technology has been developed to deliver drugs to the eye to treat a variety of ocular diseases, an approach that increases the bioavailability of a drug over conventional eye drops by a factor of 50.

This can be an important plus, considering that minute amounts of drugs delivered in drops reach the targeted tissue. The delivery device has been tested in a phase 1 study to treat glaucoma and thus far has been found to be safe.

“An approved contact lens is combined with a patented drug-eluting process and approved drugs to treat a variety of diseases,” according to Diopter Corp. CEO Chris Adams, speaking at the Glaucoma 360 annual meeting in San Francisco.

This device is effective for treating glaucoma because it was engineered with vitamin E nano-barriers to extend drug release.

“If the drugs were simply instilled in a contact lens, the drug would just run out of the lens into the eye in a few minutes,” Adams said. “Our new technology includes diffusion barriers.”

Adams noted that these are vitamin E complexes that act as barriers to prevent the drug from leaving the lens quickly.

“The drug has to circumnavigate the vitamin E complexes, thus remaining in contact with the ocular surface for a longer period,” Adams explained.

Adams and colleagues have envisioned a number of uses for this contact lens platform: as an antibiotic to treat corneal ulcers and abrasions; to lower intraocular pressure in patients with glaucoma; to treat cystinosis, a rare metabolic disorder in which crystals form in the cornea; and dry eye.

The treatment for cystinosis requires instillation of drops every hour of every day for life, which is unsustainable; the use of this contact lens, therefore, would constitute a significant reduction in the treatment burden.

Evaluations of the technology The lens was tested initially on beagles with glaucoma to evaluate the extended release capabilities of the lens, which contained the glaucoma drug dorzolamide hydrochloride-timolol maleate ophthalmic solution, (Cosopt, Merck and Co.). The contact lens was put on the cornea for 50 hours. At that point, the contact lenses no longer contained the drug and the IOP in the Beagle eye remained low for nine days after the lens was removed.

“That was a very important result,” Adams said.

Phase I and beyond

In a phase I clinical trial conducted at the University of Florida, 10 patients were treated initially with vitamin E only and no adverse events or safety issues were reported. Two patients then received the drug-containing lens and no adverse events occurred with the exception of slight irritation after a two-day dosing period.

In addition, as in the dog model, a reduction in IOP was observed over nine days after the lens was removed.

“In the future, this lens could be put in, for example, on Monday morning for a few hours and then removed. Another lens then would not have to be put in until the following Monday,” Mr. Adams said. 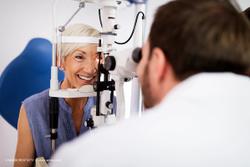