Biomechanical changes in the cornea are detected after corneal refractive surgery, with LASIK affecting parameters more than PRK.

Paris-Biomechanical changes in the cornea are detected after corneal refractive surgery, with LASIK affecting parameters more than PRK. Laser ablation seems to have a greater effect than flap cutting.

“The fear of ectasia drives our interest in finding a tool that would simplify identifying eyes with subclinical keratoconus,” said Damien Gatinel, MD, assistant professor and head of the anterior segment and refractive surgery department, Rothschild Foundation, Paris. “The demarcation line between normal corneas and those with subclinical keratoconus is not sharp. Regardless of the technique, there are always false-negative and false-positive results.”

A non-contact tonometer (Ocular Response Analyzer, Reichert) may surpass tomography and topography in detecting the essence of what may be subclinical keratoconus (i.e., reduction in the biomechanics of the cornea), according to Dr. Gatinel.

“The instrument uses a system that applanates the cornea with an air source and an infrared light source and receiver,” he said. “The pressure from the air deforms the cornea in a manner that depends on the biomechanical properties of the corneal tissue. The instrument reads the amount of light that is reflected off the cornea by two applanations.”

Corneal hysteresis (CH) is defined as the difference between the two applanations.

“The difference reflects how the cornea absorbs energy through this process,” Dr. Gatinel said.

Dr. Gatinel and his associates used topography to study patients with forme fruste keratoconus to determine if the corneal biomechanics could ferret out these eyes. They found that the CRF and CH were significantly (p < 0.05) different between normal eyes with suspected keratoconus and eyes with keratoconus.

“However, clinically, when the [instrument] was introduced, the specificity of these quantitative parameters was not sufficient to allow [differentiation] between normal patients and those with early keratoconus,” he said.

With later use of the technology, it was observed that waveform analysis of the infrared signals may lead to better discrimination. Work is ongoing to provide waveform analysis criteria that may provide more sophisticated analysis compared with previously, Dr. Gatinel said.

Changes in corneas treated with LASIK

Dr. Gatinel provided an example of a patient treated with LASIK. Before the instrument was available to him, Dr. Gatinel cut a flap in the cornea as a first step of a bioptic procedure (IOL implantation possibly followed by laser corneal reshaping to fine tune the refraction) of a patient with suspected keratoconus based on the Placido topography classification. He found that after cutting the flap the topographical indices worsened. In another patient, he was able to see that after the flap was cut, the CH and CRF decreased and remained so.

He and his colleagues later compared patients with myopia who underwent PRK (n = 87) or LASIK (n = 147) and found that there was no difference in the decrease in CH between the two procedures. However, LASIK resulted in a significantly (p < 0.01) greater decrease in the CRF.

The investigators also found that the CH was correlated significantly with the depth of the ablation. Their finding agreed with those of a Japanese study in which LASIK was found to be more detrimental to the corneal biomechanical properties than PRK.

“The amount of decrease in CH and CRF was significantly larger after LASIK than after PRK (p = 0.04), and there is also a correlation with the degree of correction,” he said.

Other previously published studies have reported that the CRF is a greater indicator than the CF after LASIK and that the reduction in the CRF seems to remain stable over time after LASIK.

Another interesting finding is that hyperopic LASIK exerts a different effect on the cornea than myopic LASIK.

A recent analysis of the waveforms in eyes with keratoconus compared with eyes that underwent LASIK found that there are differences in the biomechanical waveform parameters between the two groups. This suggested that waveform analysis might be useful to differentiate between healthy and pathologic biomechanical conditions.

Dr. Gatinel reported receiving travel funding from Reichert. This article was adapted from Dr. Gatinel’s presentation during the 2012 meeting of the American Academy of Ophthalmology. 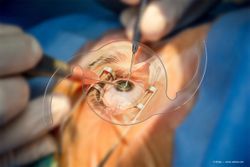 Iris-fixated IOLs are a boon for treating high myopia 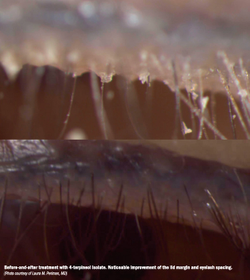