Athletes and doctors: not that different

Drew Bledsoe was the first overall pick in the 1993 National Football League (NFL) draft and went on to play in the pros for 14 years. He was voted by his fellow players to 3 Pro Bowls and in 1995 became the youngest quarterback ever to play in the game.

After his football career ended, Bledsoe returned to his home state of Washington and did something quite unusual for a stellar athlete: He became a stellar businessman.

He found he had an appreciation for fine wine, and the Walla Walla Valley region where he had grown up proved to be an excellent place to grow wine grapes. Working with advisors with knowledge of the winery business, he started a winery, and his first vintage came in at No. 51 of Wine Spectator magazine’s 100 finest wines in the world. Bledsoe went on to found 3 successful wine estates.

According to Wealthy Persons, his net worth today is approximately $60 million.1

Previously by Dr. McDonnell: Moving forward: Does science progress one funeral at a time?

In a recent interview, Bledsoe described a conversation he had with a financial adviser a few years after his retirement from the NFL. He needed to raise money for a business deal and was concerned that might prove difficult.

The financial adviser told him not to worry, telling him “If we can’t raise it from the banks or the professionals, we can just get the money from athletes and doctors.”

It seemed strange to Bledsoe at first that athletes and doctors were lumped together, especially since “doctors should be the smartest people in the world.” But upon reflection, he decided that doctors and athletes are wired the same way:

> We are really busy in our professions.

> We have God complexes (anything we do, we will be successful).

> We think we know everything, but we often do not know a lot when it comes to investing.

We all know examples of professional athletes who earn incredible sums of money, only to declare bankruptcy a few years after retirement. Similarly, as portrayed in The Wolf of Wall Street, the unscrupulous stock manipulators love to prey upon naive physicians.

I remember my father, a general surgeon, spending all his waking time either working or reading his surgery journals. He would say that “doctors are the worst businessmen,” and he was kind of living proof of that. To make up for this, he relied on a businessman friend for advice.

Unfortunately, his trust in that man was misplaced.

My own view is that it is not shameful for physicians to think about finances and investing. Surgeons can become disabled or pandemics can appear out of the blue. Financial peace of mind allows physicians and athletes to concentrate on performing their jobs well.

Physicians and athletes classically come out of training and begin receiving large paychecks with little-to-no preparation for how to handle their finances.

Drew Bledsoe is right; even we ophthalmologists are not gods.

Those of us who lack the time and/or interest in learning how to save and successfully invest would be wise to seek out and carefully vet competent advisors who do not have conflicts of interest. 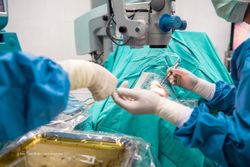