AAO’s Truhlsen-Marmor Museum of the Eye: A place for all ages

The curators of the American Academy of Ophthalmology’s (AAO) Truhlsen-Marmor Museum of the Eye have been toiling diligently despite the COVID-19 pandemic. So, when opening day does arrive, the results will be eye-opening.

The AAO's Truhlsen-Marmor Museum of the Eye will feature galleries on the ocular anatomy, the visual system and power of the retina, an interactive timeline on the evolution of eye disease discoveries, treatments and ancient artifacts dating back to ancient Egypt, as well as current innovations and advancements in the eyecare field. (Photos by Alex Delaney-Gesing, Ophthalmology Times®)

Editor’s note: Earlier this year, before the coronavirus disease 2019 pandemic forced a lockdown, the editors of Ophthalmology Times® were given an exclusive preview of the American Academy of Ophthalmology’s (AAO) Truhlsen-Marmor Museum of the Eye as it neared completion. The 3500-square-foot museum is situated on the first floor of AAO headquarters in Fisherman’s Wharf in San Francisco, California, and promises to be an eye-opener for anyone wanting to learn about the eye, its history, and associated scientific innovations. Although the pandemic has pushed back the museum’s opening, we will continue to follow its progress.


The curators of the American Academy of Ophthalmology’s (AAO) Truhlsen-Marmor Museum of the Eye have been toiling diligently despite the COVID-19 pandemic. So, when opening day does arrive, the results will be eye-opening.

After the project was approved in 2017, planning began once space was secured in AAO headquarters. The site was designed to accommodate many different groups, from children to adults, and from physicians to those with no medical background.

Although 2020 originally had been targeted for opening the museum to the public, the pandemic intervened. 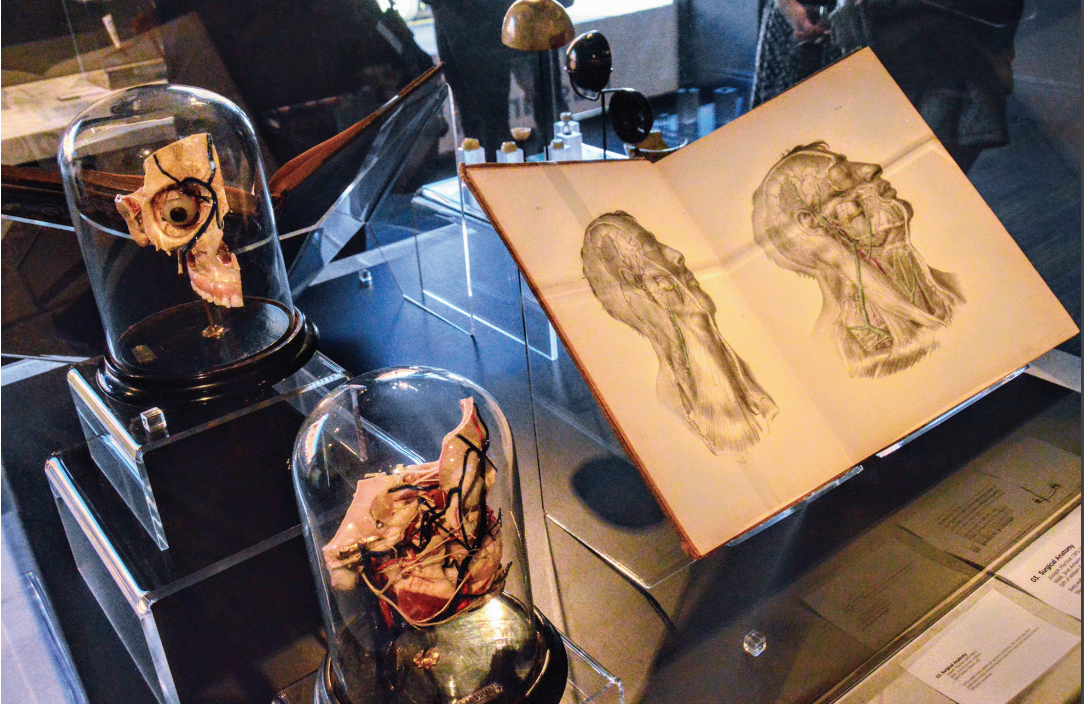 This collection of ophthalmology memorabilia boasts more than 38,000 artifacts, of which from 3% to 5% will be displayed at any time. Exhibits will demonstrate the 3-fold focus of the museum: anatomy, innovation, and discovery over time, according to Jenny Benjamin, director of the museum.

“Our hope is to bring in everyone; that is, audiences that range in age from 12 to 112 years, and including not just physicians but school groups, historians, and artists as well,” Benjamin said.

Once the museum opens, the first gallery to be viewed by visitors will focus on ocular anatomy. It will give newcomers to the eye world a base from which to learn. The exhibit includes textual information as well as hands-on eye models.

A highlight of this exhibit will be visitors’ ability to view the world in real time upside down on the model’s retina. (The retina’s image is turned right-side-up by the brain, allowing people to see correctly.)

The second gallery will focus on the visual system and the power of the retina, which will be explained in a video that outlines how eyesight works, seeing in 3D, refractive errors, how eyeglasses work, transferring of information from the retina to the brain, optical illusions, color vision, and contrast. 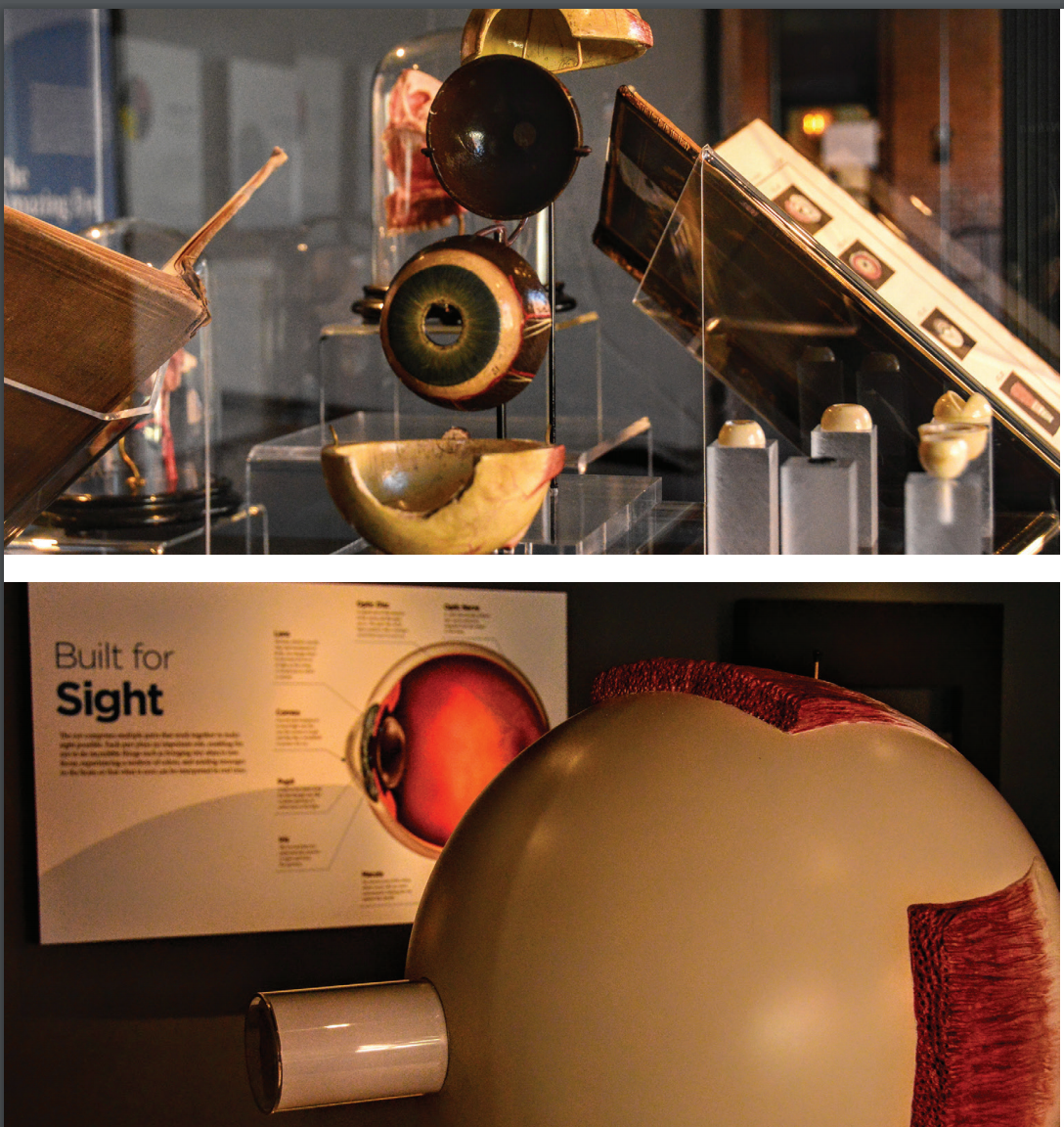 The next gallery in the museum provides visitors with an interactive timeline of the evolution of discoveries surrounding various eye diseases. It highlights treatments and the oldest artifacts, which, in this case, is an amulet dating to ancient Egypt.

Other pieces date as far back as 1000 BCE. More recent offerings include Robert Machemer, MD’s prototype vitreous fusion suction cutter, some of the original intraocular lenses from Harold Ridley, MD, and a spectacles collection with more than 3000 examples of eyewear.

Another gallery details how innovations, diseases, and treatments have evolved to modern times. Visitors may learn about a working 3-D operating microscope, virtual reality, corneal transplantation, and gene therapy, for example.

“We are an intimate space and are trying to make each element sing, and give equal time to artifacts and to information,” Benjamin pointed out. “People learn in different ways: some are doers, others are readers, and others are watchers. We have incorporated those considerations into every gallery.”

The museum also features an educational center, which includes classroom space that will be available for education and school groups. 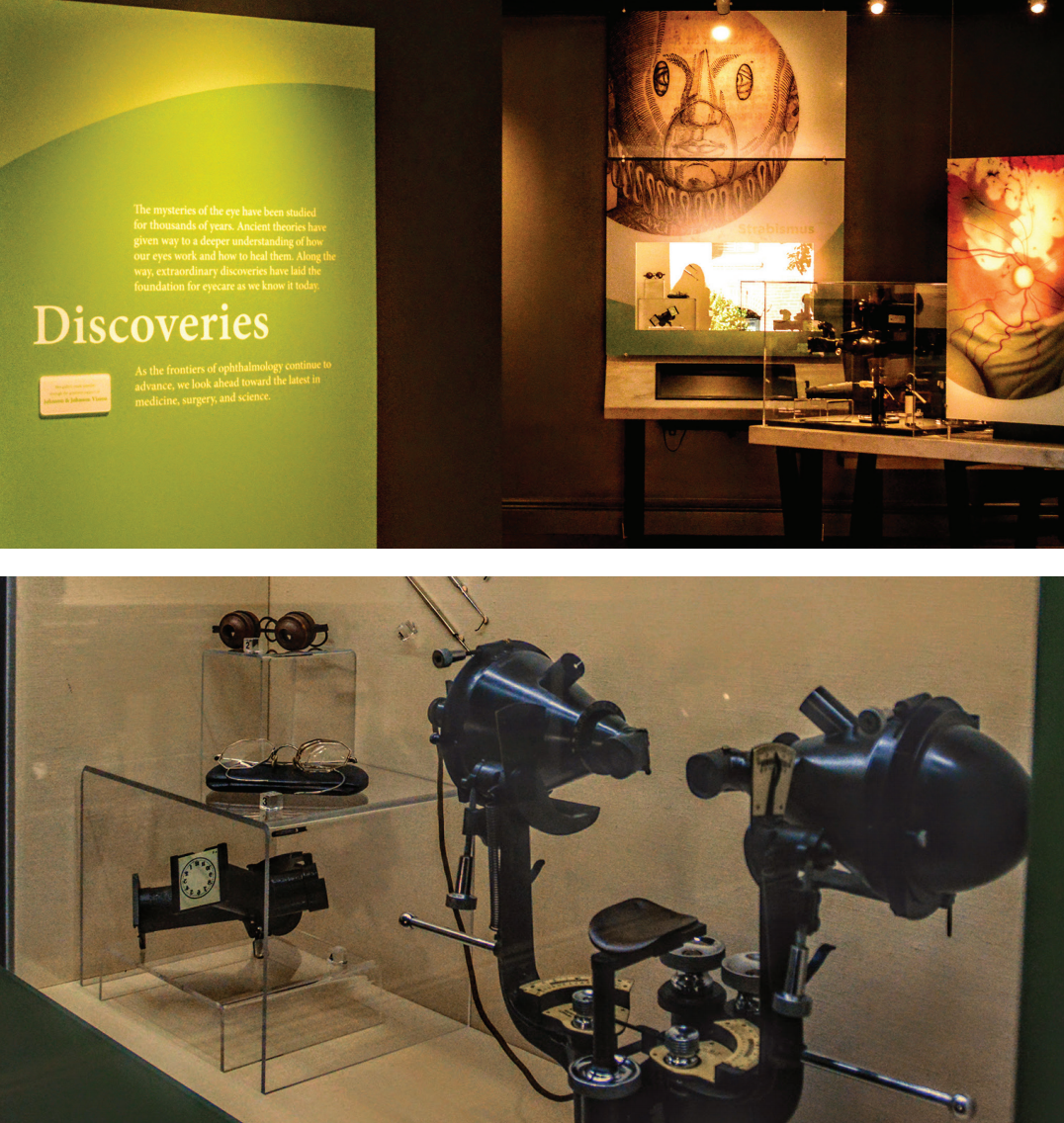 Admission to the Museum of the Eye is free, open to the public, and supported by a $12 million endowment that originated in large part from physician donations, with the largest being from AAO Past President Stanley M. Truhlsen, MD, and Michael F. Marmor, MD, and some corporate sponsors.

Benjamin said the museum will tell a story that no one else is telling.

“There is not another medical museum within 90 miles, and we will be telling a story and filling the void through ophthalmology,” she said. “The museum will be activated by docents and volunteers who will meet people where they are and answer questions. My vision is that this museum will inspire everyone who enters.”

During its first year of operation, officials conservatively anticipate that about 30,000 people will visit the museum. The facility is expected to attract tourists, San Francisco residents, physicians, artists, and historians. ■