NIH-funded clinical trial finds that starting with a cheaper drug and switching to a more expensive drug as needed leads to good vision outcomes in diabetic macular edema. 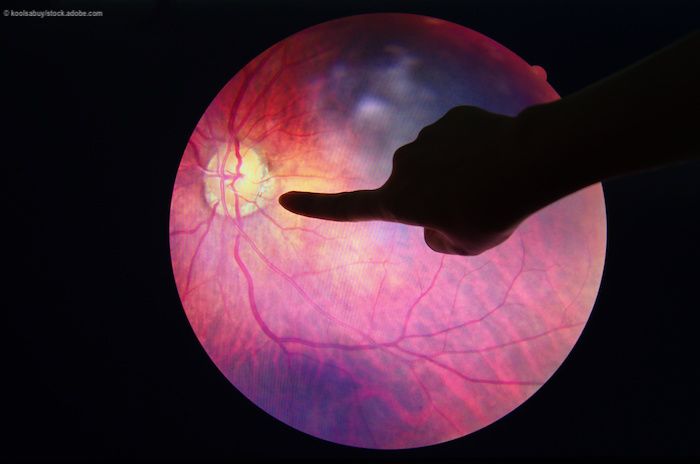 Clinical trial results from the DRCR Retina Network suggest that a specific step strategy, in which patients with diabetic macular edema start with a less expensive medicine and switch to a more expensive medicine if vision does not improve sufficiently, gives results similar to starting off with the higher-priced drug. The main complication of diabetic macular edema, fluid build-up in the retina that causes vision loss, is commonly treated with anti-vascular endothelial growth factor (VEGF) drugs.

The trial1 was funded by the National Eye Institute (NEI) and the National Institute of Diabetes and Digestive and Kidney Diseases (NIDDK), both part of National Institutes of Health. Results of the trial, which examined a stepped regimen of anti-VEFG drugs bevacizumab (Avastin) and aflibercept (Eylea), were published in the New England Journal of Medicine.

“Our study showed that switching treatments when needed is a reasonable strategy,” said Chirag Jhaveri, MD, Austin Research Center for Retina, Texas, the lead study author. “Insurance companies often require clinicians to start with the less expensive treatment, so we really wanted to see how a specific treatment strategy using this approach would affect patient care.”

According to the NEI, iabetic macular edema is caused by diabetes-related alterations to retinal blood vessels. Symptoms include blurred vision. If untreated, vision loss can become permanent and progress to blindness. Retinal injections of anti-VEGF drugs can restore vision. The DRCR Retina Network previously showed that bevacizumab and aflibercept improve visual acuity in people with diabetic macular edema. However, while aflibercept approved by the FDA to treat diabetic macular edema and results in better visual outcomes on average, off-label Avastin is much less expensive and is sometimes required by insurers as a first-line treatment.

NEI noted that the study enrolled 270 participants with diabetic macular edema, some of whom received treatments in both eyes. At enrollment, all had best-corrected visual acuity between 20/50 and 20/320. Half the study eyes were assigned to aflibercept from the start, and half were assigned to start with Avastin. For participants who needed treatment in both eyes, each eye started treatment with a different drug. Participants received either bevacizumab or aflibercept injections every four weeks for 24 weeks. If eyes assigned Avastin failed to reach the pre-set improvement benchmarks starting at 12 weeks, the eye was switched to aflibercept.

Moreover, the NEI study noted that after 24 weeks, physicians could taper down the frequency of injections as appropriate to maintain visual acuity. The study collected information about participants’ retinal structure and visual acuity for two years.

After two years, eyes in both groups had similar visual acuity outcomes, improving on average approximately three lines on an eye chart, compared to the trial’s start. In the Avastin group, 70% of eyes switched to aflibercept during the study.

“While most participants on Avastin eventually switched to Eylea, they still had improvement during those initial weeks, even if they didn’t hit our pre-set benchmarks,” said Adam Glassman of the Jaeb Center for Health Research and director of the DRCR Retina Network coordinating center. “There are large cost disparities between these drugs, so differences in treatment strategies may have substantial cost implications.”

“We’ve demonstrated here one method to managing a step treatment, where the outcomes are similar to the best existing treatment protocol with Eylea,” said Jennifer Sun, M.D., M.P.H., of Joslin Diabetes Center and Harvard Medical School, Boston, and chair of diabetes initiatives for the DRCR Retina Network. “Any time we can add to a clinician’s toolbox, whether it’s a new medication or a new approach to using existing medications, as in this study, it’s a benefit for patients.”

The study was supported by NEI (EY014231) and NIDDK through the Special Diabetes Program for Type 1 Diabetes Research. Clinical trial number NCT03321513.