It is vital for ophthalmologists to differentiate ocular nystagmus, saccadic disorders, and central nervous system nystagmus to reach the correct diagnosis and decide on the management, according to Raymond Buncic, MD, CM, FRCSC, a senior clinical neuro-ophthalmologist in the Department of Ophthalmology and Vision Sciences at the Hospital for Sick Children in Toronto, Canada.

Buncic recommended that ophthalmologists pay studied attention to the direction of eye movements, the speed of movement, and the presence or absence of patterns in the movement.

“We need to first differentiate between the type of eye movement and categorize it as an ocular nystagmus or not,” he explained. “We need to know if it is truly nystagmus at all and differentiate it from a saccadic disorder like opsoclonus, which may require a more general medical assessment and management.”

One of the key characteristics of nystagmus is that it most often has a slow phase during its repetitive eye movement, Buncic said.

In contrast, saccadic disorders feature no slow phase, are irregular and fixation dependent, have variable movement, and lack recognizable patterns and a repetitive nature, he said.

“It can be hard to tell if there is slow movement because the movements are so fast,” Buncic explained. “We also look for patterns of movement to see if it is the same nystagmus over and over. We look at eyes for symmetry of movement.”

Related: Multicolor and autofluorescence imaging: What’s in a name?

To differentiate between ocular and neurological nystagmus, clinicians need to consider features that might provide clues as to the nature of the nystagmus, he explained.

In ocular nystagmus, vision is often affected, intensity is variable, and movement is usually constantly monoplanar (ie, not changing direction from horizontal to vertical).

In contrast, in neurological nystagmus, there is often oscillopsia, movement is multidirectional, and there is a repetitive pattern of movement (ie, downbeat nystagmus or see-saw nystagmus).

In cases of ocular nystagmus with movements in the horizontal plane, conversion to a vertical nystagmus in up or down gaze indicates more of a neurological problem, Buncic noted.

Some forms of nystagmus can be more easily detected than others because of the small amplitude of movements.

“Typically, the movements are either slow in both directions (pendular) or slow in one and quick or jerky in the other (jerk nystagmus) in primary gaze,” he said.

In cases of incomplete albinism, when iris transillumination may be difficult to see with the microscope in the moving eyes, multichannel visual evoked potentials (VEP) are useful to demonstrate the abnormal chiasmal visual fiber crossing that exists in albinism, explained Buncic.

Buncic stressed that it is critical to consider the presence of any abnormality that may be impeding vision in the front or back of the eye.

Some of those conditions, such as cataract, maculopathy, foveal hypoplasia, optic nerve hypoplasia, or atrophy, are usually obvious on examination, according to Buncic.

“Some of these will require a neurological investigation,” he noted. “The ocular exam is very important and involves documentation with photography and OCT [optical coherence tomography]. This gives us a chance to look back and contemplate when we have a few quiet moments for further analysis.”

When a less obvious retinal problem such as a retinal dystrophy is suspected or the fundus looks normal, an electroretinogram will usually prove helpful in establishing the diagnosis, Buncic pointed out.

If spasmus nutans, usually characterized by exceptionally large amplitude head bobbing and abnormal head posture, is suspected, imaging should be conducted to rule out the rare, reported cause of an optic nerve tumor (optic glioma), he said.

In a series of infants with nystagmus presenting with optic pathway gliomas at the Hospital for Sick Children, Buncic noted that the main diagnostic trait was later onset.

“The overriding diagnostic characteristic was slightly later onset, 3 months or later after birth,” he said. “The other main criterion was initial uniocularity.”

Buncic and co-investigators did not find any cases of spasmus nutans in their series of optic pathway gliomas, but spasmus nutans is reported in these gliomas in the literature.

Monocular nystagmus is a clue toward either amblyopia or an optic pathway glioma, Buncic explained.

“There should be supporting evidence for amblyopia if you are going to make that diagnosis,” he said.

Related: It takes a village to beat visual system diseases in children

As a rule, if a neurological nystagmus is suspected, a child should be referred for magnetic resonance imaging and for management by a neurologist, he said.

The 2 most important saccadic disorders to keep in mind are opsoclonus-myoclonus syndrome, which can be caused by a neuroblastoma in children or be parainfectious, and the intermittent, voluntary “nystagmus” in children, which is benign but can be very alarming and distressing to parents when children continue to engage in this activity, Buncic concluded.

Raymond Buncic, CM, MD, FRCSC
p: 416/813-8919
This article is based on a presentation at the virtual Jack Crawford Day Conference, a pediatric ophthalmology update. Buncic has no financial disclosures related to this content. 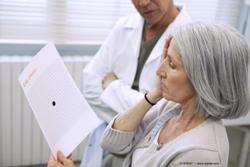