The National Institutes of Health allocated more than $183.8 million in ophthalmology-related research grants to more than 60 institutions in 2008, the most recent fiscal year for which data are available.

Washington, DC-The National Institutes of Health (NIH) allocated more than $183.8 million in ophthalmology-related research grants to more than 60 institutions in 2008, the most recent fiscal year for which data are available, according to an agency database. 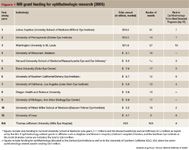 For some schools, the amount of NIH money awarded is a source of pride and an objective indicator of the quality and amount of research being performed there. The NIH is the primary federal agency supporting medical research.

"I am very proud of the research being conducted by the Penn faculty," said Stuart L. Fine, MD, the Irene Heinz Given and John LaPorte Given Research Professor of Ophthalmology and director of the Scheie Eye Institute.

"Since only the most accomplished scientists typically apply for NIH grants, and since only about 10% of proposals are actually funded, I take great pride in the fact that for the past 4 years, our department has been [ranked] number one or number two in funding from the National Eye Institute [NEI]," Dr. Fine said. "It is a testament to how our peers in the vision research community view both the importance and the quality of the work being done in our department." The NEI is one of 27 institutes and centers that make up the NIH.

Discerning from the NIH how much research funding each institution receives is not an easy task. For example, in its database, the agency lists Harvard University as having received only one ophthalmology-related grant, for $1.1 million, in 2008, but if ophthalmology-related funding to all of the university's affiliated hospitals and research institutes is counted, the total would expand to more than $26 million.

"Harvard is unique in that its teaching hospitals and institutes are all financially independent and, therefore, funding goes through the separate institutions, though all within the Department of Ophthalmology," said Joan Miller, MD, chief and chairwoman of ophthalmology at Harvard Medical School and Massachusetts Eye and Ear Infirmary (MEEI), and the Henry Willard Williams Professor of Ophthalmology at MEEI. "This is different from medical schools where the hospitals are integrated into the university. We often suffer in comparisons because of this decentralized approach, but it exists for historic reasons."

Although much research also is financed privately, the NIH funds a majority of the research performed in this country, said Ronald E. Smith, MD, chairman of the Department of Ophthalmology at the University of Southern California (USC), Los Angeles.

Although the NIH no longer issues a formal ranking of schools or departments by the amount of research funding they receive, a database lists the amount of funding given to each institution by research area. Some schools use that information to promote their level of funding. The Doheny Eye Institute at USC, for example, prominently notes on its Web site that it often is among the top three schools to receive NIH funding for vision research.

Michael A. Kass, MD, professor and chairman of the WUSTL Department of Ophthalmology and visual sciences, said the information allows people to evaluate the leading research institutions objectively.

"It's not a popularity contest. It is a metric; it is quantitative," he said.

That description assumes that all research is equal, however, said Peter J. McDonnell, MD, director and the William Holland Wilmer Professor of Ophthalmology at the Wilmer Eye Institute. Some extraordinary discoveries might not require as much funding as less important research, he said. Also, grants are funded based on what the NIH deems significant, which is subjective, he added.

"How do you measure the importance of discoveries?" Dr. McDonnell asked rhetorically. In the end, however, the ophthalmologists agree that what is most important are the advancements made in science's understanding of vision and eye disease.

"We're all in it to eliminate blindness, and the first step of that is in the research lab," Dr. Smith said. "That's what we like to do, to take the kernel of an idea [from the clinic] to a research lab, and that leads back into the clinic. It's a circle of discovery."