CellSight researchers at the Sue Anschutz-Rodgers Eye Center were published for a discovery that could lead to early diagnosis and intervention of dry age-related macular degeneration.

CellSight researchers at the University of Colorado School of Medicine are offering the first evidence connecting drusen formation, or yellowish deposits that accumulate under the retina, with extracellular vesicles and age-related macular degeneration (AMD).

In the study,1 Miguel Flores-Bellver, PhD, and Valeria Canto-Soler, PhD, highlight groundbreaking insight into mechanisms underlying early manifestations of AMD that could lead to early diagnosis and targeted treatment options of dry AMD.⁠

According to the university, Flores-Bellver’s research shows that retinal pigment epithelium (RPE) cells – a simple layer of cells located under the photoreceptor cells in the eye – release exosomes that contain both normal proteins and proteins that are associated with drusen, one of the key initial manifestations of AMD, in normal physiological conditions.

Canto-Soler pointed out that Flores-Bellver’s research shows that when RPE cells are exposed to an environment similar to that leading to AMD, they respond with a dramatic increase in the release of drusen-associated proteins via exosomes.

“It opens the possibility for early diagnosis of a person developing AMD by determining that their cells are secreting a lot more exosomes with these drusen-associated proteins than in normal conditions,” Canto-Soler, an associate professor of ophthalmology, said in a statement.

For years, researchers have been searching for the origins of drusen-associated proteins as it relates to the symptoms and development of AMD. Now, this biomarker could be found in blood samples, tears, urine, or saliva.

This discovery could help treat millions of Americans before they develop geographic atrophy, a later stage of dry AMD, because it is currently not possible to treat patient with early disease.

“Knowing that extracellular vesicles are releasing drusen-associated proteins presents an opportunity for novel diagnostic and therapeutical approaches,” Flores-Bellver said in a statement.

Flores-Bellver also pointed out that if investigators can define assays to measure these proteins released in these exosomes, they could potentially diagnose the disease early, perhaps even at the time of onset.

“Because of that, we may be able to treat AMD patients better,” he added. “Also, we could think of developing new tools to target and modulate exosome release and protect the cells from the accumulation of drusen under the retina.”

“If we understand how drusen form and what cells or mechanisms contribute to their formation, we may be able to control the formation of drusen and slow down or even, perhaps prevent, some of the pathological events leading to AMD,” Canto-Soler added.

CellSight researchers plan to expand upon this study by working with the CU Department of Ophthalmology’s AMD registry.

“We started CellSight four years ago with the goal of developing stem cell-based diagnostics and therapies for retinal degenerative diseases,” Canto-Soler explained. “This discovery opens a path for developing one of these potential diagnostic or therapeutic tools for patients with AMD.” 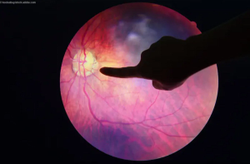 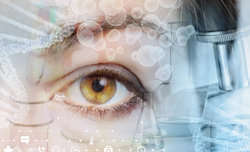