Dongkyun Lang, a biomedical engineering and optical sciences professor, is developing a way to diagnose and treat corneal ulcers that is eight times cheaper and 20 times faster than today's gold standard. 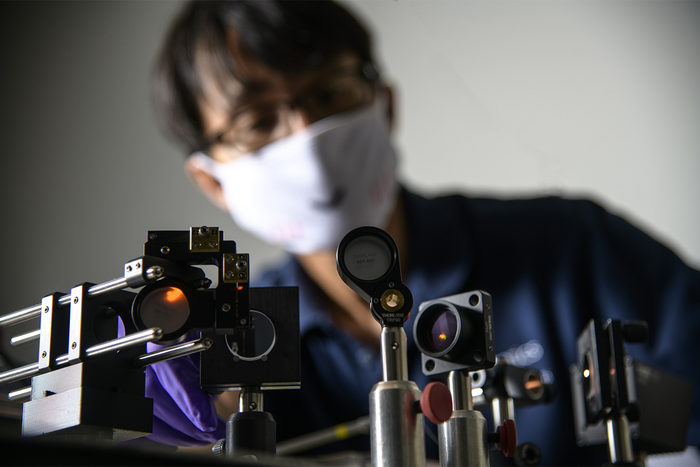 Dongkyun "DK" Kang, a biomedical engineering and optical sciences assistant professor at the University of Arizona, was developing a smartphone confocal microscope to diagnose cancer in rural settings when a researcher on the other side of the world reached out to see if his the same technology could be used to diagnose corneal ulcers. (Image courtesy of Kris Hanning/University of Arizona Health Sciences)

In rural farming communities, eye infections can be a common occurrence, with a scratch on the cornea caused during agricultural often becoming infected and turning into a scar, then an ulcer.

Corneal ulcers cause blindness and visual impairment in 4.3 million people worldwide every year, according to data published by The Lancet Global Health.

Moreover, methods for diagnosing these ulcers can be costly, invasive and time consuming, and they are not always accessible for those living in rural areas.

According to a news release from the University of Arizona, a researcher is working on an alternative: a portable device that he is creating with support from a $1 million grant from the National Eye Institute.

Dongkyun "DK" Kang, a biomedical engineering and optical sciences assistant professor at Arizona and a member of the university's BIO5 Institute, had been developing a smartphone confocal microscope to diagnose cancer in rural settings. On the other side of the world, Jaya Chidambaram, a senior lecturer at the University of Manchester in the United Kingdom, was testing out a confocal microscope for diagnosing corneal ulcers on patients in India.

When Chidambaram heard about Kang's work, she reached out to see if his low-cost, portable technology could be applied to corneal imaging to make diagnoses faster, more affordable and accessible in rural communities. They got to work on a concept to create a portable in vivo confocal ophthalmoscope, or PICO.

"She came with a problem, I came with a solution, and we felt like this was a really good match," said Kang, the PICO project's principal investigator and head of the Translational Optical Imaging Lab in the UArizona James C. Wyant College of Optical Sciences.

Moving beyond invasive imaging
The first-line diagnostic tool for corneal ulcers is a slit lamp — a device used in routine eye exams to shine a slit of light, which the ophthalmologist can move back and forth over a patient's eye to look for problems. However, even experienced ophthalmologists often cannot determine the origin of an infection from slit lamp examination alone. Knowing whether the infection is fungal, parasitic or bacterial is key to treating the ulcer effectively. Today's gold standard is microbiological testing, which involves scraping off a small piece of the cornea and culturing it for several weeks.

It is not ideal, Kang said.

"That sort of examination is not always available in low-resource settings, and, if the ulcer is acute, it sometimes progresses even more during that one- to two-week wait," he said. "Not to mention it's an invasive, painful process for the patient."

Chidambaram's clinical trial involved using in vivo confocal microscopy to capture images of patients' eyes. This method is faster, more accurate and less invasive than microbiological testing, but it's not without its drawbacks: Confocal microscopes are expensive, nonportable and require direct contact with the cornea. Though the method offers same-day results, the actual imaging, in which the microscope is touching a patient's already inflamed eye, can take about half an hour.

By teaming up with Kang, Chidambaram hopes to overcome some of those challenges.

A faster scan of a greater area
Confocal microscopes in use now achieve high resolution and contrast by illuminating just one point at a time with a laser-focused light. The laser moves over each point to gather information, combines all the data, and digitizes it to create a highly detailed image.

This high level of resolution is critical, but the required mechanical precision is time-consuming. Physicians can only capture a relatively small area in the image. Eye movements, which are practically inevitable when a device is touching a patient's eye, often result in physicians having to rescan some areas, making the process even longer. And it's costly. Confocal microscopes run upwards of $75,000, severely limiting their use in rural clinics.

The key to the technology Kang and Chidambaram are working on is that it scans in two dimensions rather than one – line by line, rather than dot by dot. The PICO device uses a diffraction grating to disperse the light source into different colored wavelengths, similar to what happens when light passes through a prism. The diffraction illuminates a two-dimensional line, rather than a one-dimensional point, so a much larger portion of the eye can be scanned at a time without sacrificing image quality.

"We use that diffraction method to scan and illuminate an image in the entire area of tissues, without having to mechanically scan anything," Kang said. "This makes it possible to increase the speed by up to 20 times and reduce the cost by up to eight times."

Kang estimates the method will take about two minutes. Because the beam doesn't need to be moved with such careful mechanical precision, it's also easier to scan a larger area of the eye in one go. And all of it can be done without direct corneal contact, reducing risk and discomfort for the patient.

Because the device is portable, it also means doctors can bring the technology directly to patients and provide results right away, rather than a patient needing to make multiple trips to a hospital or doctor's office.

"We strongly believe that PICO will be adopted as a standard corneal imaging tool, and its availability in a wide range of health care settings will fundamentally improve eye care worldwide," Kang said.

"This partnership has the potential to transform vision care, particularly in rural communities where access to such care may be limited," he said in a statement. "By leveraging existing technology in an innovative way to improve the patient experience, this work speaks directly to the university's core values of adaptation and compassion. I look forward to following Dr. Kang's progress in creating a new gold standard for corneal imaging."