Researchers continue to explore device’s measurement of patterns, any correlation to IOP 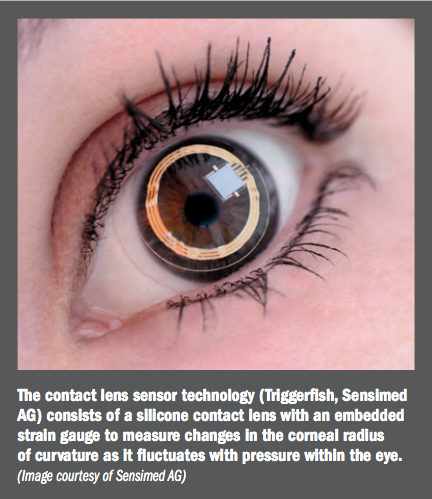 The contact lens sensor may be able to identify which patients are at greatest risk of glaucoma progressing faster, according to Arthur J. Sit, SM, MD.

A contact lens sensor (CLS) (Triggerfish, Sensimed AG) may be able to identify which patients are at greatest risk of glaucoma progressing faster, according to Arthur J. Sit, SM, MD.

“There do seem to be specific patterns that are associated with glaucoma progression,” said Dr. Sit, professor of ophthalmology, Mayo Clinic, Rochester, MN.

However, Dr. Sit cautioned that the device cannot be used to measure an individual patient’s IOP, and more research is needed.

“To really understand where this fits into our clinical armamentarium, we’re probably going to need prospective data,” said Dr. Sit, who presented a research update on the device.

“When we think about how we measure IOP patterns it can vary a lot depending on our situation,” he said. That leaves clinicians to rely on estimates.

“Most of us measure every few months, and we hope that what we’re measuring is the correct parameter for what we’re actually trying to treat,” Dr. Sit said.

The Triggerfish, by contrast, provides noninvasive, continuous, 24- hour monitoring. It consists of a silicone contact lens with an embedded strain gauge to measure changes in the corneal radius of curvature as it fluctuates with pressure within the eye.

An antenna is embedded around the periphery of the lens. A matching adhesive antenna worn around the orbit transmits power and sends data to a portable recorder carried by the patient.

The device is sensitive enough to record changes in pressure with blinks and saccades, “so it pretty clearly picks up changes within the eye,” Dr. Sit said. It also shows changes after treatment with selective laser trabeculoplasty, ab interno trabeculectomy, and ExPRESS shunt.

Rather than measuring IOP, however, the Triggerfish measures the distension of the eye with pressure and produces output in millivolts. The device was approved by the FDA in 2016 “to detect the peak patterns of variation in intraocular pressure over a maximum period of 24 hours to identify the window of time to measure intraocular pressure by conventional clinical methods.”

So how well do the patterns it measures correlate to changes in IOP? Dr. Sit cited a study from the University of California, San Diego (UCSD) that measured the patterns in one eye with the contact lens sensor and in the contralateral eye with pneumatonometer every 2 hours. These patterns correlated closely: R 2 = 0.956 Peaks in pressure coincided between the Triggerfish and the pneumatonometer.

“However, when you look at the amplitudes that occur over 24-hour period with the [Triggerfish] and the IOP measurements with the pneumatonometery, there is in fact no correlation,” Dr. Sit said.

“What that suggests is that they have similar patterns, but they are not equivalent.” In another study from UCSD, researchers measured the patterns over 24 hours and then repeated these measurements later.

They found good correlation, but with significant individual variation, said Dr. Sit. For example, in one 53-year-old male with a stable life, the two patterns overlapped. But in a 20-yearold male glaucoma suspect with variable sleep patterns, there was almost no correlation between the two measurements.

“Given these limitations, is there in fact clinical value that we can get out of the Triggerfish?” Dr. Sit asked. “There is emerging evidence that yes, there is.”

He cited a study from Hong Kong on primary angle-closure glaucoma. The researchers found that there were significant differences in IOP fluctuation measured by the Triggerfish between patients who have progressive and stable disease, with larger fluctuations in the group that had progressive disease.

Another study, this one from Japan, looked at normal-tension glaucoma patients. The range of pressure fluctuation was larger in the eyes with normal tension glaucoma compared with patients without glaucoma. These researchers postulated that the larger fluctuation might be one of the reasons that patients developed glaucoma.

Another study, this one a multicenter, retrospective cohort study, conducted at 50 centers in 13 countries, included 445 eyes in 445 patients who were treated for manifest open angle glaucoma. The researchers measured visual field progression by mean deviation slopes.

They analyzed 55 variables in a multivariable model, including age, baseline disease and laser surgery. They found that if they used a model with the Triggerfish parameters, it was more closely associated with fast visual field progression than if they used IOP measured by Goldman applanation tonometry in the office.

Arthur J. Sit, SM, MD
E: sit.arthur@mayo.edu
This article was adapted from Dr. Sit’s presentation during Glaucoma Subspecialty Day at the 2018 meeting of the American Academy of Ophthalmology. He is a consultant to Aerie Pharmaceuticals, Allergan, InjectSense, and PolyActiva.