A foldable, hydrophobic acrylic IOL embedded with a small-aperture mask provided excellent visual acuity across all distances in patients who underwent monocular implantation after cataract surgery and was not associated with any visual symptoms that may occur with other presbyopia-correcting IOLs.

A foldable, hydrophobic acrylic IOL embedded with a small-aperture mask provided excellent visual acuity across all distances in patients who underwent monocular implantation after cataract surgery and was not associated with any visual symptoms that may occur with other presbyopia-correcting IOLs.

“Early functional results from patients with this novel IOL implanted are in alignment with outcomes achieved using the intracorneal small-aperture inlay (KAMRA, AcuFocus) in showing that it provides an extended range of vision,” said Dr. Ang, a surgeon at the Asian Eye Institute, Makati City, Philippines.

This IOL is a single-piece aspheric lens (12.5 mm overall diameter) with an opaque annular mask embedded centrally into the 6-mm optic. Made of polyvinylidene fluoride (PVDF) and carbon nanoparticles, the mask is 5 μm thick, measures 3.23 mm in diameter, and has a 1.36 mm central aperture.

More in this issue: Early treatment of orbital fractures

Dr. Ang presented data from follow-up out to 1 year for nine eyes operated on at his center. He reported mean monocular uncorrected visual acuity (UCVA) for the implanted eye was J2 for near and 20/20 for both intermediate and far distances. The results for near and intermediate vision were even better when testing was performed with refraction in the implanted eye shifted to a small amount of myopia (–0.75 DS), with little to no effect on distance vision, and there was no evidence that the lens induced any unwanted visual symptoms.

“No adverse visual effects have been seen, and studies conducted in these initial recipients along with findings from investigations performed in an animal model show that the lens does not hamper the ability to perform posterior segment evaluations or surgical procedures,” Dr. Ang said. “Now we look forward to collecting additional data.”

The benefits of small-aperture optics for correcting presbyopia have been known for a long time and explain the high satisfaction of patients with the small-aperture intracorneal inlay implanted, Dr. Ang noted.

“The strategy improves near and intermediate vision while maintaining good distance vision and does not create competing focal points that can degrade image quality,” he said. “In addition, monocular implantation of a small-aperture optic maintains binocularity for distance as well as binocular contrast sensitivity.”

“I have personally been involved with lenses to correct presbyopia since 1985, and am more excited about this small-aperture IOL than any other IOL I have worked on,” Dr. Tarantino said. “Other pseudophakic lenses for improving vision at near while maintaining distance vision performance usually have downsides that include problems with glare, halos, or intermediate vision, and other monovision strategies cause loss of binocularity.

“The data we have to date with monocular implantation of the small-aperture IOL suggests it is really the first approach that can provide a continuous range of vision without any apparent drawbacks,” he added.

The patients recruited for implantation with the small-aperture IOL were at least 45 years old, had best-corrected distance visual acuity of 20/30 or worse due to cataract in the eye to be implanted, and clear intraocular media other than the cataract. The fellow eye could be either phakic or have a monofocal pseudophakic IOL.

Mean MRSE for the 9 eyes at 12 months was –0.14 ± 0.52 D, and Dr. Ang reported visual acuity results from testing performed without refractive correction and with correction to a target of –0.75 DS.

“Optical modeling indicated the small-aperture optic IOL would increase the depth of focus by about 1.5 D, and that was consistent with our defocus curve results,” Dr. Ang said. “However, target correcting to the optimal refractive error of –0.75 DS resulted in a positive shift in the defocus curve and an equivalent add power of about +2.25 D.”

Dr. Tarantino noted that research conducted by Pablo Artal, PhD, in his optics laboratory at the University of Murcia, Spain, indicates that decentration of up to 0.5 mm does not adversely affect image quality obtained with the small-aperture IOL.

He also explained that the PVDF/carbon nanoparticle mask contains 3,200 microperforations that increase the flexibility of the material (which is stiffer than the hydrophobic acrylic) to enable IOL folding and implantation. The microperforations are sized and positioned to minimize any potential for diffractive dispersion.

Patients with the small-aperture optics IOL implanted were also asked to rate the severity of a variety of visual and ocular symptoms using a scale of 0 (none) to 7 (severe). Preoperatively, blurry/fluctuating vision was the predominant complaint (mean score = ~3), but it was reduced at 12 months after surgery (mean = ~1). Mean postoperative scores for all other visual symptoms, which included glare, halos, night-vision problems, double vision, and ghosting, were also about 1 or lower and not significantly different than the preoperative means.

“Comparisons with postoperative data from patient ratings of symptoms in the fellow eye corroborate the conclusion that implantation of the small-aperture IOL did not induce dysphotopsias,” Dr. Ang said.

Patients in the study also underwent various diagnostic tests to examine whether the small-aperture IOL would affect retinal evaluations. The assessments included visual field testing, posterior segment OCT, fundus photography, and binocular indirect scleral depression. The results showed visual field was reduced by about 1 dB in the implanted eye and that the IOL did not interfere with the ability to perform any of the studies.

The IOL has received CE mark and will be launched commercially in Europe in 2015. Investigations in the United States are still being planned.

This article was adapted from Dr. Ang’s presentation during the 2014 meeting of the European Society of Cataract and Refractive Surgeons. Dr. Ang is a consultant to AcuFocus.

Dr. Tarantino is chief clinical and regulatory officer with AcuFocus. 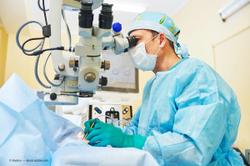