San Diego, host city of this year's American Society of Cataract and Refractive Surgery meeting, April 27 to May 2, offers attendees an ideal climate for enjoying the great outdoors. Take time to explore the surroundings with a run on the beach, a bike ride on a scenic trail, or for the more adventurous spirit, rock climbing in the backcountry.

With 70 miles of coastline, visitors to San Diego County have many recreational options, such as surfing, snorkeling, sailing, or kayaking in a secluded cove. Head across the bay from downtown San Diego to Coronado peninsula. It offers one of "America's Top 10 Beaches," according to The Travel Channel. You can reach Coronado in 15 minutes by ferry, leaving the B Street Pier in downtown San Diego on the hour. Also, you can drive across the Coronado Bridge.

Stroll through the tree-lined streets of Coronado, a beautiful community of stately old homes and cozy bungalows. Visit the specialty shops and restaurants at the Ferry Landing Marketplace. Rent a bike or rollerblades to travel the 15 miles of bike paths. Don't miss a trip to Hotel del Coronado, a national landmark resort with nearby marina. The Coronado Visitor Center can be found at 1100 Orange Ave. (619/437-8788).

Garden tours are available, including a self-guided walk originating from the Balboa Park Visitor's Center. Offshoot Tours covers the history and horticulture of the park every Saturday at 10 a.m. Park rangers focus on the park's historical and botanical treasures, giving tours every Tuesday and Sunday at 1 p.m.

For the museum lover, Balboa Park has a $35 passport, valid for 1 week, to visit 13 park attractions. Call 619/239-0512 for general information on days and times. The pass includes entrance to:

Golf enthusiasts will have no trouble finding a course to play because San Diego has more than 90 courses.

LEGOLAND California, Carlsbad, CA (760/918-LEGO; http://www.legoland.com/), is considered one of the world's best theme parks, according to http://Forbes.com/. This 128-acre playground offers attractions, rides, and opportunities to build. Its most recent addition to Miniland U.S.A. is a replica of the Las Vegas Strip made with 2 million Lego bricks. Don't miss Dino Island, Explore Village, Fun Town, Pirate Shores, Knight's Kingdom, or Imagination Zone.

Downtown shopping has never been easier with a visit to Westfield Horton Plaza, 324 Horton Plaza (619/239-8180). Enjoy browsing through Nordstrom, Macy's, Louis Vuitton, as well as any of the other 140 specialty stores that catch your eye.

If you are visiting La Jolla, cruise along Prospect Street, famous for its upscale boutiques, offering designer clothing, jewelry, fine art, and antiques. It's also called the "Rodeo Drive" of San Diego.

The outlet shopping destination can be found in Carlsbad, a seaside village north of San Diego. It is home to Carlsbad Company Stores (760/804-9000), with more than 80 name-brand outlets. 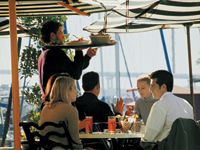 Azzura Point
4000 Coronado Bay Rd. (Silver Strand Boulevard) Coronado
619/424-4000
California Mediterranean dining with a gorgeous view of the bay can be found on the second floor of the Lowes Coronado Bay Resort.

Dobson's
956 Broadway Circle (2nd Avenue)
San Diego
619/696-0398
A great destination for New American food for a business lunch or before the theater. A real cosmopolitan feel.

Rainwaters on Kettner
1202 Kettner Blvd. (B Street)
San Diego
619/233-5707
Considered by some to be San Diego's version of Morton's of Chicago. Great place for a business lunch at this steakhouse.

Sammy's Woodfired Pizza
770 Fourth Ave. (F Street)
San Diego
619/230-8888
Although this is a chain of restaurants throughout southern California, it is still one of the best places for gourmet pizza, pasta, and salads. Open for lunch and dinner.

Blue Point Coastal Cuisine
565 Fifth Ave. (Market Street)
San Diego
619/233-6623
Considered by some to offer the best seafood in the city, in addition to delightful martinis. A place to see and be seen.

George's at the Cove
1250 Prospect St. (between Cave & Ivanhoe streets)
La Jolla
858/454-4244
Three levels for dining on New American cuisine and seafood specialties: the main floor for formal business entertainment; the second floor for singles to mingle at the bar; and the roof terrace for a romantic evening under the stars.