The Steroids for Corneal Ulcers Trial allays some fears about using a topical corticosteroid as an adjunct to antibiotic treatment in eyes with a bacterial corneal ulcer.

Based on the results of SCUT, ophthalmologists can feel more comfortable using topical corticosteroids as an adjunct to antibiotics to treat a bacterial corneal ulcer in many circumstances, assuming there is no impending or present perforation, he noted.

More in this issue: Drug-delivery micropump for chronic retina disorders

In addition, the study data suggest that starting the steroid earlier after diagnosis, within 2 or 3 days, may be better than delaying its initiation.

“SCUT is not without its limitations,” said Dr. Jeng, professor and chairman, Department of Ophthalmology and Visual Sciences, University of Maryland School of Medicine, Baltimore. “However, it was a rigorously designed well-powered study. While it did not show any obvious benefit of steroid use as an adjunct to a topical antibiotic regarding the primary endpoint, it also found no serious safety concerns.”

“Therefore, keeping in mind that clinical judgment is always needed because every corneal ulcer is different, SCUT is a valuable study because it allays some long-standing fears about the use of steroids in eyes with bacterial keratitis,” he said.

Although theoretically, steroid treatment could improve visual outcomes by controlling inflammation that could lead to tissue destruction and scarring, there has long been concern surrounding steroid use due to the potential for delayed epithelial healing and worsening of the infection, particularly when Pseudomonas aeruginosa is the pathogen.

However, as stated in the American Academy of Ophthalmology’s Preferred Practice Pattern Guidelines on bacterial keratitis version available prior to SCUT, “there is insufficient evidence to make an official recommendation.”

“Before SCUT, the only evidence available was from animal studies, retrospective studies, and three small randomized trials from outside the United States that enrolled between 30 and 42 patients and generated some conflicting results,” Dr. Jeng said.

Sponsored by the National Eye Institute, SCUT was a randomized, double-masked, placebo-controlled trial. It was conducted at two centers in the United States (Francis I. Proctor Foundation, University of California-San Francisco and Dartmouth-Hitchcock Medical Center) and one in India (Aravind Eye Care); the latter site enrolled the vast majority of the 500 patients in the study population.

Eligible patients had a culture positive bacterial ulcer and were randomly assigned to a 3-week tapering regimen with prednisolone sodium phosphate 1.0% solution or placebo beginning as early as 48 hours after starting topical moxifloxacin 0.5% (Vigamox, Alcon).

The primary endpoint was best spectacle-corrected visual acuity (BSCVA) at 3 months. Secondary endpoints included BSCVA at 3 weeks, infiltrate/scar size, time to re-epithelialization, and adverse event rates, including corneal perforation. For all of those measures, there were no significant differences between the steroid and control group.

There were also no other serious safety concerns associated with steroid treatment, although a later analysis in which patients were categorized by pathogen found that steroid use was associated with a significantly larger scar size and a poorer visual outcome in patients infected with Nocardia species.

Commenting on the relevance of the latter findings, Dr. Jeng noted that while Nocardia spp. comprised 11% of the pathogens in SCUT, it is a rare cause of bacterial corneal infections in the United States.

About 400 patients were seen at 12 months, and in the overall group, there was no significant difference in mean BSCVA between those who had used the steroid and the controls.

“However, findings from this extended follow-up of patients in SCUT showed that among patients seen at 12 months, mean BSCVA was better by 1 line among those with a non-Nocardia infection who had used steroids compared to the controls,” Dr. Jeng said.

Recently, data were reported from a group of 50 patients with follow-up to 4 years that showed BSCVA remained stable from 1 to 4 years, and after controlling for vision at enrollment, BSCVA at 4 years was not significantly different between the two study groups.

Per SCUT protocol, patients were to start on their assigned study medication after being on topical moxifloxacin for at least 2 days and up to 4 days. Results of an analysis of outcomes based on time to steroid initiation showed that visual acuity at 3 months was approximately 1 line better among patients who started the steroid on days 2 or 3 versus those starting on day 4.

“In a suspected bacterial corneal ulcer, I would not start the steroid until I had laboratory results to confirm the diagnosis,” Dr. Jeng said. “However, once bacterial etiology is confirmed, SCUT gives reason to start the steroid as soon as possible.”

The fact that the vast majority of patients in SCUT were enrolled at the India site raises the question of whether the results can be generalized to the U.S. population. In addition, SCUT does not answer questions about which is the best antibiotic to use for treating bacterial corneal ulcers and what is the most appropriate steroid regimen.

“Some critics suggest that the steroid dosing frequency was too low and perhaps there may have been greater benefit with more frequent dosing,” Dr. Jeng said.

“However, despite the limitations, SCUT is a landmark study that will guide us clinically, and I am sure future studies will be designed to answer some of the unanswered questions,” he concluded.

This article was adapted from Dr. Jeng’s presentation during Cornea Day at the 2014 meeting of the American Society of Cataract and Refractive Surgery. Dr. Jeng has no relevant financial interests to disclose. 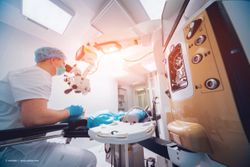 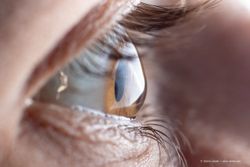