David Rittenhouse (1732-1796), one of America's foremost scientists and patriots, was called upon by George Washington to become the first director of the U.S. Mint. Rittenhouse was well-qualified for this position, having been a clockmaker, surveyor, mathematician, and astronomer.

It takes a village to beat visual system diseases in children 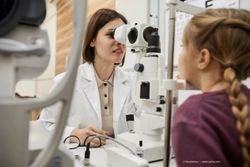 Looking to the future of pediatric ophthalmology