By Fred Gebhart; Reviewed by Richard Chu, DO

Fort Worth, TX-Ophthalmologists who aren’t sure which IOL might be the best match for a particular patient have outside objective help.

Researchers presented what may be the first study to use patient satisfaction surveys to compare the three FDA-approved presbyopic-correcting IOLs with validated test instruments.

The study, “Comparison of NEI-RQL-42 and SVQ quality of life measures after masked bilateral implantation of three FDA-approved presbyopia-correcting IOLs at 6-month follow-up,” investigated patient perceptions of the three lenses.

Other results have showed very good and objective outcomes for all three lenses. In terms of patient perceptions, each of the three lenses had its own strengths and weaknesses that made it more, or less, helpful for specific subsets of patients.

“The results supported what we suspected based on lens designs,” Dr. Chu said. “Patients thought that the ReSTOR and Tecnis Multifocal had better near vision while the Crystalens had better distance vision and was better in terms of glare and halos, too.”

The surprising part was that all three lenses did well in patient satisfaction scores, all three did well in terms of spectacle independence, and all three scored better than monovision using the same validated assessment instrument, he added.

A second surprising finding was the lack of correlation between objective measurements of surgical results with each of the three lenses and subjective patient preferences, Dr. Chu said.

A comparison of patient satisfaction scores on the NEI-RQL Distance Vision Subscale and the measured residual spherical correction 6 months following implantation showed no relationship between subjective satisfaction and objective results. The r2 was less than 0.3 for all three lenses.

The idea of patient satisfaction surveys is not new, Dr. Chu said.

The novel element in this study was the use of familiar and standardized quality of life and patient satisfaction instruments. Most practices develop their own survey questions or procedures-which means results cannot be compared across different studies, products, patient groups, or practices.

“We chose these two instruments because they have been used in many other studies and have been well validated,” Dr. Chu said. “The NEI-RQL, published in 2003, is more commonly used in America. The SVQ, which was published in Australia in 2004, is more familiar in other areas.”

Both of these surveys were designed for LASIK, but they measure many of the same limitations, symptoms, and side effects of post-refractive surgery that we are interested in following IOL implantation. Since there is not a survey designed specifically to evaluate IOLs, these are the closest instruments available and the best validated, he noted.

One of the key messages from the study is that patient perceptions of both their vision and specific side effects-such as glare and haloes-are at least as important as objective measures.

Patients who value distance vision will probably be happier with a Crystalens or ReSTOR, which showed better satisfaction scores compared with Tecnis Multifocal (versus ReSTOR p = 0.02).

Patients who are bothered by glare might want to avoid Tecnis Multifocal, which showed significantly lower satisfaction scores at both 1 month and 6 months compared with Crystalens (p < 0.01 at 1 and 6 months) and ReSTOR (p = 0.01 at 1 month, p = 0.04 at 6 months). Glare scores improved for all three lenses from 1 to 6 months which suggests neuroadaptation.

“This study was really a way to quantify the patient experience with these three IOLs and get real world data in a quantifiable, analyzable manner,” Dr. Chu said. “In objective measures, these lenses all do pretty well.”

Lens selection really comes down to what the patient’s needs and preferences are, he noted.

“If you have a patient who is sensitive to glare and halo, for example, the Tecnis Multifocal would be the lens to avoid in that patient,” Dr. Chu said. “When new generations of lenses come out, we now know how to evaluate them in an apples to apples manner by using these same validated instruments.” 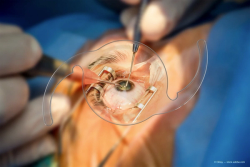